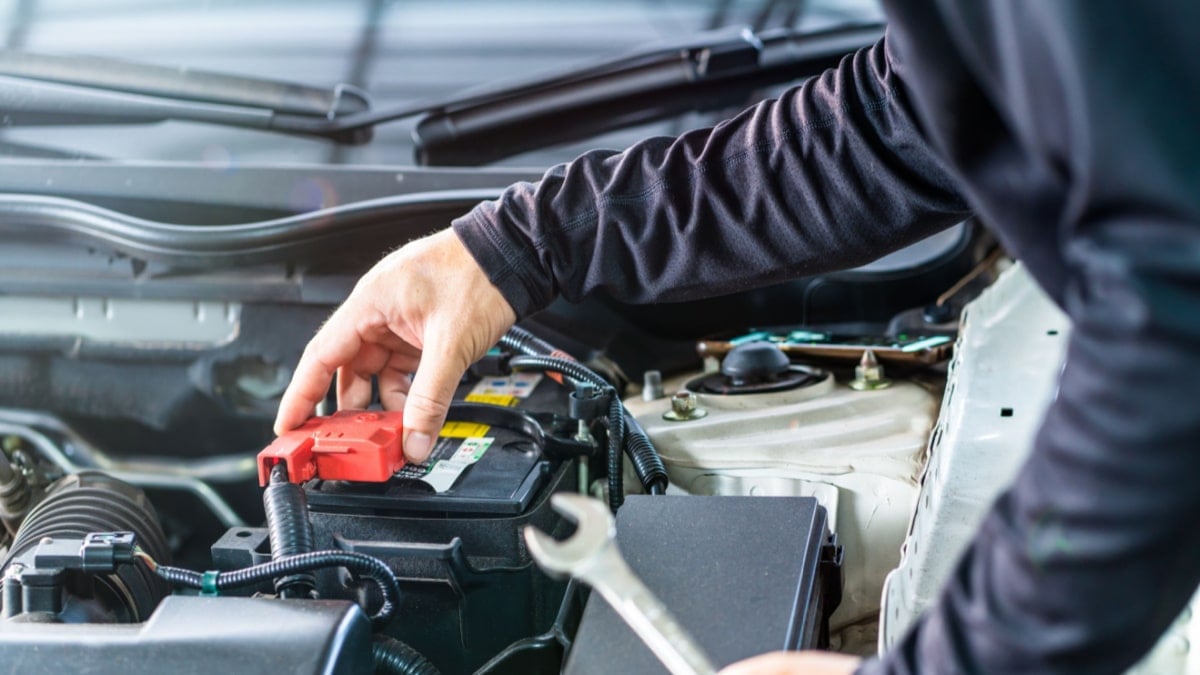 One car part that most people can recognize and understand is the battery. However, it’s not always easy determining the symptoms of a bad car battery. Nor do you always comprehend the function of the car battery or know how to test it.

In this guide, we look closer at the failing car battery symptoms. We also review its location, function and average replacement cost while showing you how to test it to determine the charge level.

What Are The Symptoms Of A Bad Car Battery?

The main symptoms of a bad or failing car battery include:

Here is a more detailed list of the signs of a bad car battery to look for:

The car battery is responsible for powering up the lights on the car. If the battery is dying, you might start to notice that the headlights aren’t as bright as they once were.

The brightness can be tough to notice at first. However, there are times when the headlights might also flicker, which isn’t tough to see.

Bad batteries will also cause an array of electrical troubles. If the battery is dying, you could notice trouble with the electrical system or alerts on the dashboard.

For example, you could notice that the heated seats aren’t working properly or the stereo is glitching. Dashboard lights could also flicker, while your power windows might not work.

Furthermore, it might become impossible to charge your cell phone or you could struggle to open the sunroof. Of course, one of these issues alone doesn’t mean the battery is dying, especially if there’s just a problem with that system itself.

The battery’s main responsibility is to provide the power needed to start the engine. When you turn the key, any trouble could pinpoint issues with the battery.

With that said, trouble starting a car can also mean an issue with the starter, the alternator or the ignition system. If you only hear clicking when you turn the key or the engine is taking longer to get started, you should have the battery looked at.

As the battery starts to fail, you could see corrosion on the terminals and connectors. The corrosion appears as a white, crystal-type substance or it appears in blue-green powder formation.

You can clean it off with a simple baking soda and water solution. However, if the battery acid continues leaking, you need to replace it instead.

RELATED: Battery Terminal Corrosion Causes (How to Fix & Prevent It)

The car battery case should remain its normal size throughout its entire life. If there is swelling or the case begins to bulge, it’s a sign that something isn’t right.

The first signs that something is wrong with the battery include a swollen or cracking case. You may also see some of the sides starting to bulge, creating an entirely different shape.

When the car battery is working as it should, there will be no unusual smell. Leaking battery acid is what causes a stinking sulfur smell, like rotting eggs.

The leaking battery acid is also what causes the corrosion we previously discussed. If the battery is leaking, it’s time to replace it.

Car batteries can be placed in several different locations. With most passenger vehicles, the battery is found underneath the hood, usually by one of the front corners. Yet, high-performance or race cars can place the battery in the trunk to provide better weight distribution for faster speeds.

Either way, you can find the location of your car battery by looking in the owner’s manual for your model.

Wherever the battery is located, you shouldn’t struggle to identify it. The battery is often placed in a black box. It contains two cables connected to its top. One of the cables is positive, while the other is negative. The cables could be colored red and black, respectively. In general, the average car battery measures around 6×10 inches, so it’s not small enough to miss.

The primary purpose of your car battery is to create enough power to start the engine when you turn the key in the ignition. It’s a part of the car’s starting system. Here’s the process of starting the car:

The car battery also works as a surge protector, keeping all of the electronics safe. It’s needed to provide short-term power for accessories, such as the wipers, GPS, radio and lights, when the engine is turned off.

Today’s cars generally use two different types of batteries. You might have a fluid or AGM battery, both of which use lead-acid construction. The lead-acid battery has plates internally that are immersed in some form of electrolyte. When the ignition is activated, the electrolyte reacts with the plate material to generate an appropriate current. This current sets the chain of actions listed above in motion, so the car can start.

How to Test the Car Battery

First and foremost, you must make sure that it is set to the appropriate settings. If you don’t have an auto-ranging multimeter, set the dial to 20V DC.

Before you connect your multimeter, you must turn off the ignition. Make sure all of the accessories and lights are also turned off.

Put the red lead on the positive terminal, usually indicated by a ‘+’ symbol or red cover. Put the black lead on the battery’s negative terminal. The reading should be above 12 volts. If it is lower than that, it indicates that the battery needs to be charged or is bad.

If you want more information, you can test the battery while cranking. This test helps you determine if the battery simply needs to be charged or if it is ready for a replacement.

Again, make sure all of the accessories and lights are turned off. You can also disable the ignition or fuel system because you don’t want the engine to start. It’s important the engine only cranks for this test.

Connect the multimeter the same way, with the positive lead on the positive terminal and the black probe connected to the negative terminal. Get a friend to turn the ignition while you monitor the multimeter. You don’t want to crank the engine for more than 15 seconds. If the voltage drops below 9.6 volts, your battery is weak and should be replaced.

If you don’t have a multimeter or don’t feel equipped to test your car battery, there are other options. Many auto parts stores will test the battery free of charge.

You could also visit your local mechanic. However, this battery inspection will usually come with some sort of diagnostic fee.

READ MORE: How Much Does It Cost to Replace a Car Battery?

How do I know if it’s the battery or the alternator?

The easiest way to determine if it is a bad battery or a bad alternator is by measuring with a multimeter. Start the car engine and turn on the headlights. Measure the voltage between the battery terminals and you should see a voltage of 12.5 to 13.9 volts. If it’s below 12.5 volts when the engine is running, you probably have a bad alternator or charging system problem.

How often should you change your car battery?

In general, most batteries last between four and five years. However, there is no fixed schedule of when you should replace the battery, and it depends on the make of your battery, the age of your car, and how often you drive. If you drive a lot or your car is older, you may need to replace it more often.

Can a weak battery cause a car to run rough?

It is not very likely that the car battery will cause you car to run rough, due to the fact that if the engine is running, the alternator should provide electricity to the essential parts to make the car work. But if both the battery and alternator are bad, that could be the cause.