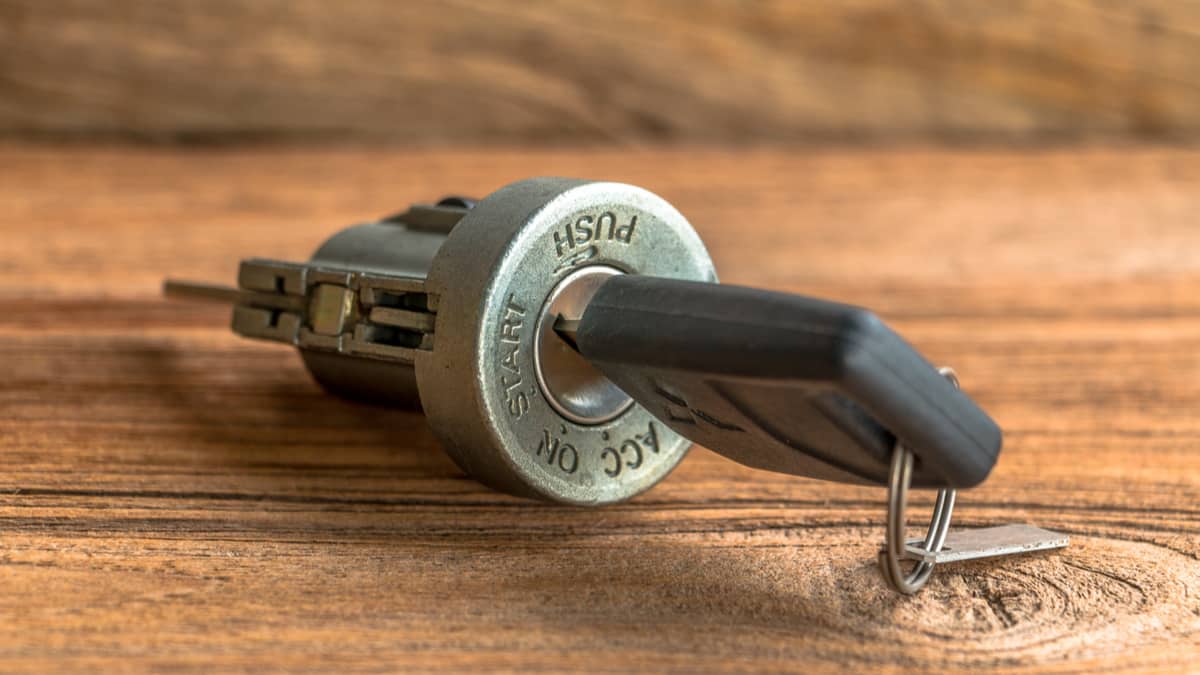 The ignition switch is a very important part of your vehicle because it literally powers up every electronic device in your car.

Therefore you may also understand that any problem with this small piece can cause tremendous problems with your car.

It’s a very clever piece of technology that must constantly be improved and updated to keep up with your vehicle’s security. But what happens when the ignition switch goes bad? Let’s find out!

The most common symptom of a bad ignition switch is a car that won’t start or a stallin engine while driving. If you notice a blinking instrument cluster or if your ignition stays on after removing the key, it’s also a strong sign it’s bad.

Inside the ignition switch, there is an electrical part connecting electrical circuits when you turn the key. If this small part is worn, it may struggle with this, and if any of these two steps are missing, your car will not start at all.

The same thing applies here, as mentioned before – if there is a bad connection in the ignition switch, it can cause the ignition to shut off when it should not.

This can cause your car to shut off while you are driving suddenly, and to diagnose this; it is easiest by looking at your dashboard. If all lights on the dashboard are dying together with the car engine – there is a big risk that something is wrong with your ignition switch.

3. Blinking Dashboard or Other Accessories

Another problem that you may notice is that the lights on your dashboard or other electrical accessories inside your car are blinking or turned on and off sporadically.

4. Ignition is constantly turned On

If you drove your car and were going to shut it off, but to your surprise, the car was still running when you were turning off the ignition and removed the key – it is happenings because of a bad ignition switch.

This is something that is not very common, but it can happen for sure. If the immobilizer is unlocked once – it does not need to recognize the key again until the car is restarted, and therefore the car will run fine without the keys in the ignition.

So, perhaps your key can be inserted and turns inside the barrel, but your ignition still doesn’t switch on. As long as the vehicle’s battery contains sufficient charge, this would indicate a faulty ignition switch.

Some ignition switches will allow the electrical unit on the back of the key barrel to be changed independently of the barrel itself. However, it’s more common for the entire ignition switch to be sold as a complete unit.

This is a common fault on keys that have a more cylindrical shaped design to their blade. Over time the notches and groves round off and go smooth. This prevents the key from being able to move the various pins inside the barrel into the correct positions.

If the pins aren’t moved into position, then the key won’t turn. Again, this is a fault that will often gradually get worse and worse, so try and get the key blade replaced if you notice that it’s rounded as soon as possible.

The Function of the Ignition Switch

The ignition switch has two major components. There is the mechanical and the electronic.

The ignition switch’s mechanical part is the key barrel (of course, this doesn’t apply to a keyless start system). The key barrel works in the same way as any other key barrel on a lock. A series of pins are pushed into place via the grooves and notches in your key’s blade. Once the key has been inserted, and all of the pins have been pushed into place, your key is allowed to turn the ignition on.

The electrical parts contain some electrical circuits that connect when you turn the key in the ignition lock. For example, when the ignition is on, it will connect two connectors which will then send power to the ignition relay, which fires up most vehicle components.

Your ignition switch is usually located on the back of the ignition lock cylinder where you insert your car key.

To reach the ignition switch, you often have to remove all the covers around the steering wheel and disassemble the whole ignition lock cylinder.

In some car models, you can remove the ignition switch from the ignition barrel – but sometimes, it is an integrated part.

If you have a little bit older car model, it is most likely to replace the ignition switch alone, and in this case, you can expect a cost of $20 to $50 for the switch.

In some car models, you have to replace the whole ignition lock barrel, making the procedure a lot more expensive.

Unfortunately, as the part will usually only be available via the vehicle’s manufacturer, and the coding has to be carried out by a specialist, this kind of repair will often cost over $1000.