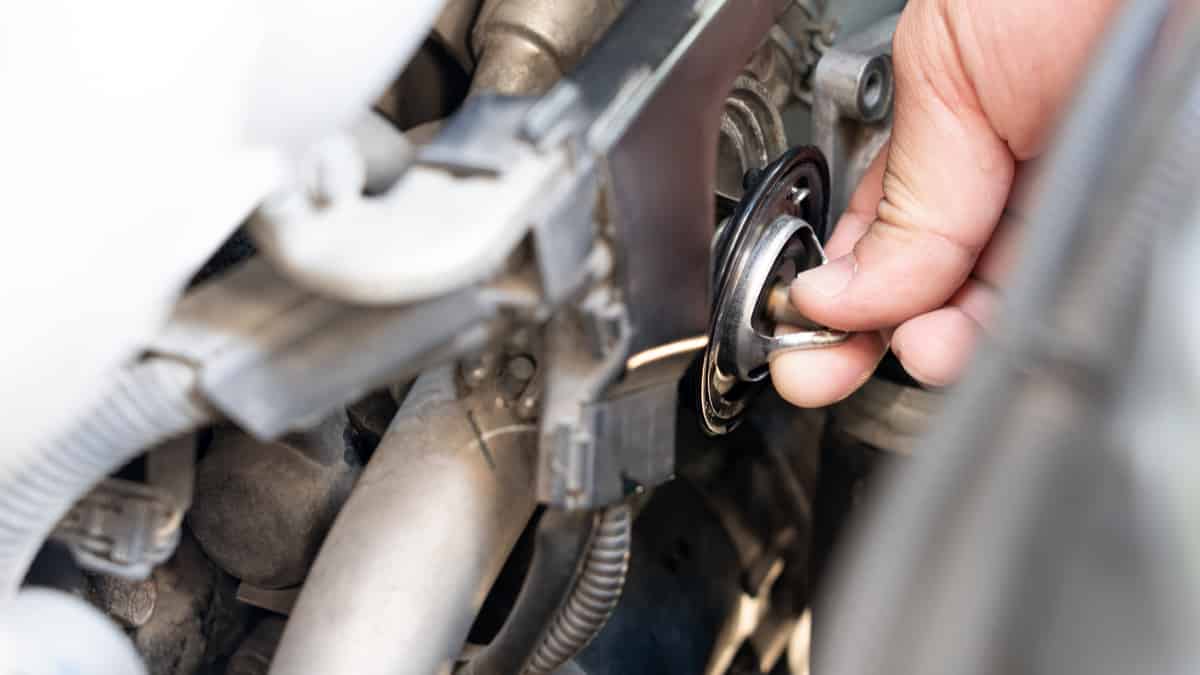 With a malfunctioning thermostat, you may experience the engine not operating at an optimal temperature and overheating, which can seriously damage your engine.

In this article you will learn the most common symptoms, location, and the replacement cost of a thermostat. Let’s begin with a quick look at the signs to look for.

Symptoms Of A Bad Car Thermostat

The symptoms give you a warning in advance to take the necessary precautions. Here is a more detailed list of the most common signs of a bad or failing thermostat to look for:

When the car thermostat remains stuck closed, the hot coolant cannot flow to the radiator. Because the hot fluid cannot be cooled down, it keeps the temperature of the engine up higher than normal.

Coolant needs to make its way to the radiator to be cooled down. Once this occurs, it comes back to the engine and dissipates more of the heat. However, with the stuck thermostat, the coolant remains stagnant, continuing to build up more heat.

If the engine overheats, it can cause serious damage. For example, if you end up with a blown head gasket, you are looking at massive repair bills.

However, an overheating engine isn’t always caused by a bad thermostat. You want to check the coolant levels to ensure you have enough fluid in the system. It could also be due to a bad water pump or a cooling system leak. Additionally, the radiator could become clogged. Still, the thermostat should be one of the parts you examine.

If the opposite were true from the above complaint, the thermostat would be stuck open. When this happens, the coolant is able to flow freely to the radiator. Without coolant sitting in the engine for an extended period of time, the operating temperature might fail to reach normal limits. Not only will the engine struggle to increase temperature, but it will also have trouble maintaining its range.

When the engine doesn’t get warm enough, it’s going to be less efficient. You might notice that the motor is using more fuel than usual, costing you additional money at the pump. This problem can also lead to premature wear of the engine components.

When the thermostat starts to fail, it can create an erratic operation. Sometimes it could be stuck open when it should be closed and vice versa. This malfunction leads to temperature fluctuations in the engine that aren’t normal.

When the thermostat doesn’t fail uniformly, it can create mixed signals. You will notice strange temperature readings, leading you to wonder what is causing the problem. However, a quick check of the thermostat might reveal that this is the culprit.

The coolant heats up the heater in your car. Therefore, you may experience temperature fluctuations inside the car from the vents if the thermostat is not doing its job properly to maintain an even temperature in the car’s engine.

If both your temperature gauge and the heat inside the car fluctuate, it is definitely time to check the thermostat.

If the thermostat is not working properly, the hot coolant in the engine coolant chamber will find a way to escape because of too high pressure. We all know that hot air rises and that water boils and forms steam when it heats up.

When the coolant heats up, and the pressure gets too high, it can attack the weak points and cause a leak. The coolant is often pressed out of the radiator tank

Leaks are often straightforward to detect because they are visible and often show up in white steam smoke.

So if you see the temperature gauge rise and the radiator tank is filled with water, you most likely have a problem with the thermostat. A rising coolant level can also mean that the car is about to overheat.

The thermostat is a critical component designed to ensure that the engine is always running at its optimal temperature. Without it, the engine won’t operate as it should.

When the motor isn’t running right, you are going to notice performance issues. Most notably, the fuel economy is going to suffer as the engine works harder to compensate for the temperature discrepancies.

If the engine is overheating or unable to reach temperature, there could also be increased emissions from the fault. Not only is the bad thermostat putting the engine at risk for failure, but it’s also contributing to a polluted environment.

How Does a Car Thermostat Work?

The car thermostat’s job is to keep the engine’s temperature within its working limits. This small part sits between the engine and radiator, regulating coolant flow between the two parts. When the thermostat closes, the coolant isn’t able to flow. When it’s open, coolant flows to dissipate heat.

Most car engines from the past few years operate at the same temperature range to ensure maximum performance. In general, the car engine should be around 195 to 220 degrees Fahrenheit. When it doesn’t run within these temperature guidelines, it’s not operating efficiently.

When coolant is kept from flowing to the radiator, the engine temperature increases rapidly. On the other hand, as the coolant flows into the radiator, heat is quickly dissipated.

The thermostat is often located in a plastic or metal housing near the water pump, connecting to the radiator’s lower hose.

It is most often located on the housing that connects the radiator’s lower hose, but it can be the upper hose in some cars.

Because it is often installed inside a housing, it is in most cases impossible to see with your own eyes without removing it, so to use a repair manual is a good way to find the exact location of your car model.

The average thermostat replacement cost is between $70 and $450, depending on the car model and labor costs. A thermostat costs around $20 to $50 and the labor cost at a workshop is between $50 and $400.

Some cars have a whole housing with the thermostat integrated, making it impossible to replace the thermostat alone. This can make the part very expensive.

On some cars, the thermostat is placed really badly, requiring some hours of work, while on other cars, you can replace it yourself within 10 minutes.

Check a repair manual to find out how much work it is to replace the thermostat on your car model.

How to Test a Bad Thermostat

It doesn’t take a lot of mechanical knowledge to test the car thermostat. In fact, a simple visual exam is all you need to perform.

Start by taking off the radiator cap. It’s under the hood, near the front of the vehicle, mounted to the radiator. Don’t ever open the radiator cap when the engine is hot. This test should only be done with a cold engine. Turn the car on and allow the motor to run.

As you look inside the neck, you should not see coolant flowing to the radiator. As the engine is cool, the fluid should not be moving inside. If you already see coolant running, the thermostat is open when it shouldn’t be.

If the coolant isn’t flowing while the engine is cold, everything is running as it should so far. Now, you want to allow the motor the chance to warm up. However, you need to be careful with the hot coolant, as it can cause injury.

As the temperature rises in the motor, coolant will start flowing into the radiator. If you don’t see any coolant moving but the temperature is rising on the dashboard, the thermostat might be stuck closed. In either situation, you must

Can you drive with a bad thermostat?

No, it’s not recommended to drive your car with a bad thermostat. If your thermostat is malfunctioning, it could cause your engine to overheat, which could lead to serious engine damage. It’s always best to get a faulty thermostat fixed as soon as possible – otherwise, you’re risking some very costly repairs down the road.

Can you run a car without a thermostat?

Although you can drive a car without a thermostat, it is not recommended. If you remove the thermostat, your car will not reach operating temperature. This will cause a higher fuel consumption and wear your engine faster.

Is it hard to change a car thermostat?

Replacing a thermostat can be quite a tricky job for many people. Replacing the thermostat itself is often not that difficult, but properly bleeding the coolant system afterwards can be tricky. In some car models, it can be very difficult to reach the thermostat as well.

Do I have to drain coolant when replacing the thermostat?

The main symptoms of a bad car thermostat include: