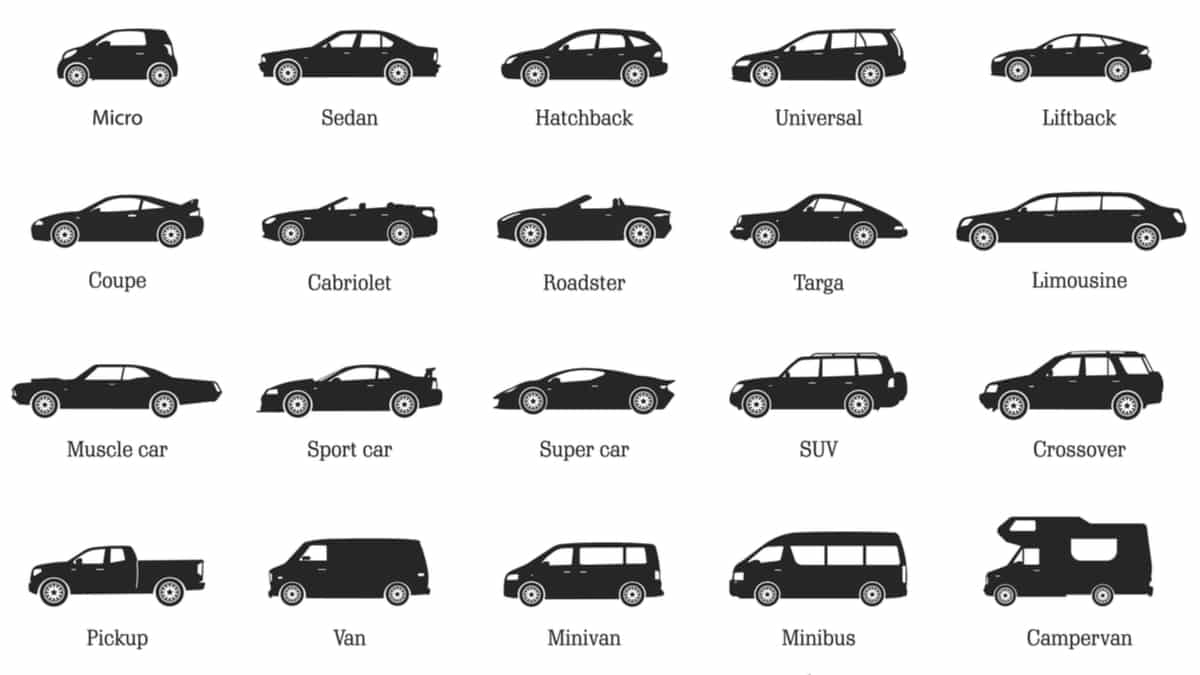 It can be challenging to purchase a new car or vehicle if you are not familiar with the different types of cars.

First, you will need to identify your specific needs like luggage space, the number of passengers, engine size, and fuel efficiency before purchasing a new car.

Technological innovations have led to new car types that did not exist a few years ago. There are over twenty different types of cars on the market, depending on how you count them. Let’s begin with a quick look at the different classifications before we go into the car types.

Cars are classified into different categories depending on several factors. Here is a list of those classifications.

The most common vehicle type is categorized according to the styling of the body. Different body styles can be coupé, hatchback, sedan or convertible cars for example.

The size of the car can also categorize them into different types. For example, compact cars, mid-size cars, microcars or extra-large cars are determined by the size.

City cars, Mini-compact cars, muscle cars, luxury cars, and green cars are some car types that are categorized based on the market segments that your car has.

Another way to categorize cars is by using the fuel type. We have not included any of these types in this article, but cars categorized by fuel can be diesel cars, electric cars, hydrogen cars, gas cars, etc.

Now when you have a bit more knowledge about the different car classifications, let’s get straight into our car type list:

These are tiny cars that often come with an engine size of less than one liter and 700c. They come in various unusual designs and are ideal for city traffic due to their fuel efficiency and parking ease.

The microcar is most often a two-passenger vehicle. Examples of microcars include cyclecars, bubble cars, and the Tata Nano car. Modern microcars are most often electrically powered.

One of the most common car type is the Sedan. A sedan has four doors and a separate boot. The difference between a hatchback and a sedan is that the rear trunk door does not include the rear window. The door hinges are installed under the window.

Sedan cars are often quite limited space in the trunk, but they often have a slightly sportier look if you are looking for it.

Another type that is climbing in this list of car types is the SUV which is becoming more and more popular The SUV is a large car that can carry five to seven passengers. They are basically the same as a crossover, except they are built on a body-on-frame chassis. They are often 4wd and have good off-road capabilities.

They often come armed with the latest electronics and are very comfortable to ride in. They also often come with off-road accessories like enhanced suspension and large wheels. You can have SUVs in varying sizes – compact, mid-size, and full-size. A good example of an SUV is the range rover, Jeep Cherokee or Suzuki Vitara.

A Hatchback car is basically a mix of a sedan and a combi car. They often come in a 5 door setup and have a trunk door that opens upward. Like the combi, a hatchback has door hinges above the rear window. The difference between a combi and a hatchback is often the size and the fact that the combi often has a much steeper angle on the trunk door.

A roadster car is basically a cabriolet car, but with two door and does often not have a backseat. They are therefore good for only two people. When it comes to the size, they are often very small.

They often have a sporty look and are perfect for those who like to enjoy good weather with your friend or fiancee.

A Station Wagon is not a very common car model type, but they do absolutely exist. They are basically a combi car, but they are often very long with more angles on the trunk.

A good example of a station wagon is the Volvo v90.

Pickup cars have become very common in recent years. A pickup has an enclosed cab with an open cargo area. They can either be two passengers or four.

Pickups are ideal for farmers and transporting goods due to their large cargo areas. They do come in both 2WD and 4WD.

A Van is a two or three-seated car model that is often used to transport goods. They often have a sealed cabin from the cargo area, and they often do not have windows to the cargo area, but some models have glass windows at the rear doors.

A coupe car is basically a sedan but with two doors instead of four. Coupe cars often have a back seat for two or three more passengers, but you often have to fold any of the front seats to get there. A little bit of sportier car models mostly use coupe cars.

These are high-performance cars with large engines. Most are two-seaters while being very expensive – some are going for as high as one million dollars. Most have V8 or V12 while generating over 500 hp. Depending on the model, the supercar often comes with an open roof.

A sports car is anything that looks sporty to you, and it can be a roadster, coupé, or even a sedan. Sports cars are quite similar to the supercar because a supercar can also be a sports car, but the difference is often that the sports car is the step under the supercar.

They are often much cheaper than supercars and usually have less performance. Sports cars usually have good handling and a quite powerful engine to be able to both drive on the streets and take it to the track if you feel for it. Sports cars are often cabriolets, but it’s not necessary.

A luxury car is exactly what it sounds like – luxury. They are often very expensive and have all the latest functions for a comfortable ride. They often have a very powerful engine, but not very fast in corners and at race tracks. This is because they often have so many functions for comfort, so they are usually very heavy.

A luxury car can also be a supercar or sports car and the definition is often referred to very expensive cars with great comfort.

Muscle cars are cars with big muscles under the hood. Muscle cars are often referred to as older American cars with very large and powerful engines, but muscle cars also exist in modern cars. Muscle cars are usually not that fast at race tracks around corners, but when going in a straight line, like drag racing, not many other cars can beat them.

Ford Mustang and Dodge challenger are two very typical cars when it comes to muscle cars.

A mini truck is precisely what it sounds like – a small truck, and it is a mix of a Pickup truck and a truck. They often have two or three seats and an open cargo area but can also come with a closed area. They are often built on a truck chassis and are often pretty strong built for heavy loading.

A Minivan is a Van, but instead of a cargo area, it has seats for passengers. It often has 7 or 8 passenger seats, making it perfect for bigger families or taxi cars. They do often have a sliding door on one or both sides of the car.

A limousine is a stretched car that is often used by celebrities and pop stars. It features an elongated base and can be created from various car models.

They are often not created like this in the factories but are rebuilt after leaving the factory, often by special companies.

In the last place on the list, you find the truck. While they are not really a car type, they can come in many forms and are still a vehicle type, so we wanted to include it. Most people know what a truck is. It is a two or three seated vehicle type, sometimes equipped with a bed behind the seats. It has a large cargo area and is primarily used for transporting goods by companies.

Did we forget any car model? Let us know in the comments!

Ask any car question in our new community!

« How to Choose the Right Axle Ratio for your Pickup Truck

If you have a car question, submit it to our community for a faster answer.