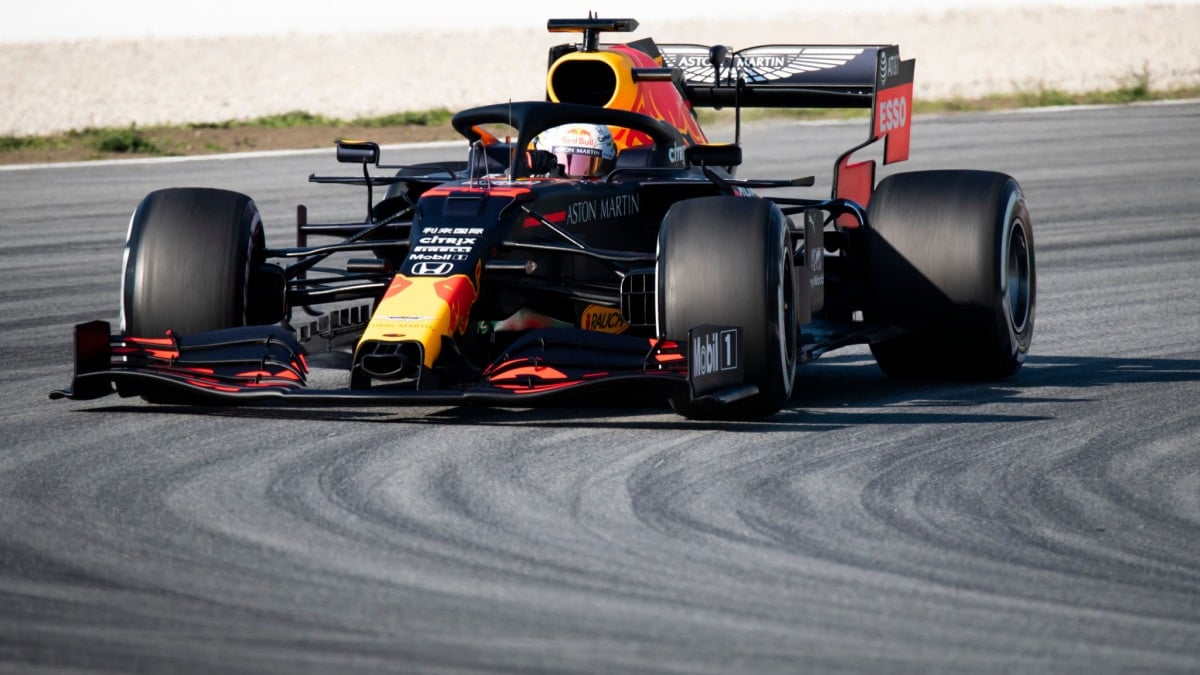 If you are a fan of fast cars, it’s possible that you are an F1 enthusiast. You know these cars are made to break records, but how fast do F1 cars go during races?

In this guide, we look at the top speed of F1 cars and discuss what makes them go so fast. We also compare the F1 cars to other options, such as NASCAR, Indy, MotoGP, and Top Fuel.

How Fast Do Formula 1 Cars Go During Races?

F1 cars can hit 60 mph from a standstill in as little as 2.6 seconds and typically hit speeds of 223.6 mph (360 km/h). These cars can hit high speeds because of the specially-created aerodynamic design. Valtteri Bottas is the world-record holder from the 2016 Mexican Grand Prix when he hit 231.4 mph (372.5 km/h).

Cars tend to travel faster in a straight line, but that’s not always the case with the F1 design. It’s meant to work its best while on a circuit. These race cars are created based on the track.

Drivers cannot access the full speed at all times. There are a lot of turns and braking zones that require a speed reduction. Plus, running the F1 cars at full speed for too long can put additional wear on the vehicle and its tires. That’s why racers are constantly managing the speeds throughout the circuit.

Beyond that, crosswinds have a dramatic impact on how fast the F1 car is going to go. Not only will the crosswind reduce speed, but it affects the way the vehicle handles. If there’s any debris left on the tract, handling can also be compromised, forcing drivers to slow down.

On top of all of that, F1 cars are also limited to a maximum speed. There’s a safety measure put in place to ensure drivers don’t get hurt by going too fast.

What Makes F1 Cars So Fast?

Formula 1 cars are very fast due to the high level of technical development inherent in their design and construction. F1 teams are constantly working to find new ways to increase speed and performance, whether through advances in aerodynamics or improved engine reliability.

F1 cars perform best when traveling at higher speeds. The handling of the car actually gets better the faster it goes. With top speeds reaching more than 220 miles per hour and a 0-60 mph time of just about two seconds, you know these cars are lightning bolts.

At top speed, the F1 car is going to create tons of downforce that keeps it stable. This downforce is further manipulated by adjusting the rear wing, so the car gets pushed further onto the track as it moves. The faster it moves, the more force gets applied down on the body, giving it a superior level of stability.

F1 cars are designed to provide an optimal balance between power and weight. The lighter a vehicle is, the more efficient it is, allowing for more power to be outputted. The majority of F1 cars weigh around 1,700 pounds, while the turbo V6 engine used in most of them can pump out more than 1,000 horsepower.

RELATED: How Much Does a Car Weigh? (Average Weight by Car Type)

NASCAR vehicles are slightly slower than the average F1 car. NASCAR vehicles tend to hit 60 mph in about 3.4 seconds, with a top speed of just under 200 mph. These cars are both meant for racing, but they are built with a different purposes in mind.

The NASCAR model travels around an oval track without any crazy turns or bends. The cars are heavier and larger than a typical F1. It’s meant for more endurance than the F1 can take because it has to run at higher speeds for the majority of the race. In comparison, the F1 vehicles hit high speeds at shorter intervals.

NASCAR also has several restrictions in place for maximum speeds. These regulations were put in place after accidents occurred where people got hurt.

RELATED: Is Nitrous Legal in Cars in the United States?

Are Formula 1 Cars Faster Than IndyCars?

IndyCar is the fastest race car with a single seat. The fastest speed of any IndyCar in a competition reached 236 mph (380 km/h). In comparison, that’s significantly faster than the F1 cars can go. However, Indy cars take a longer time to reach this fast speed compared with an F1 car.

Lots of people think that IndyCar and F1 use the same design. While they are similar, there are some stark differences between the two.

Are Formula 1 Cars Faster Than MotoGP?

Formula 1 cars are faster at driving around a racetrack than MotoGP bikes. This is mainly because they have two additional wheels for traction, even if they are heavier. The acceleration is quite comparable between these two.

It doesn’t seem fair to compare bikes to cars, but these two are actually quite comparable. The fastest MotoGP time is held by Jorge Martin during the 2022 Italian Grand Prix at Mugello. The speed reached was 226.2 mph (363.6 km/h).

Similar to F1, the MotoGP bikes can also hit 60 mph in about 2.6 seconds. However, it will take a little longer for the bikes to hit top speeds.

When it comes to acceleration, a Top Fuel drag racing car is much faster than a Formula 1 car. But when it comes to cornering on a racetrack, the Top fuel doesn’t stand a chance. These types of cars are fastest at what they are built for.

If there’s a car that’s meant for acceleration, it can be found at the NHRA Drag Racing Series. When the NHRA was first established, cars could hit 140 mph in just about nine seconds. Many things have changed over the years, adding to intense excitement.

Today, these cars are known to be the fastest in the world. The best category is Top Fuel, where the cars are equipped with a supercharged fuel-injected gasoline engine designed around the HEMI. These motors can consume more than 15 gallons of nitromethane in just seconds. With this kind of consumption, you can expect speeds to reach more than 330 mph. In fact, these models can reach the end of a 1,000-foot drag strip in less than 3.7 seconds.

Beyond the Top Fuel racers, there are also some great speeds coming from the Funny Car segment, which is just one segment below. These cars use the same power source but have a shorter wheelbase, so they look more like a production vehicle. In a Funny Car, you can expect speeds exceeding 330 mph with a run time of around 3.8 seconds.

Related: Spoon Engine – What is it & Which Cars Can Have It?

How much horsepower does an F1 car have?

A Formula 1 car typically has around 1000 horsepower. However, this varies depending on the races and teams. To put that into perspective, a typical family car has around 150-200 horsepower. So an F1 car has about 5 times the power of a normal car.

How much fuel does an F1 car hold?

An F1 car holds around 30 gallons or 110 liters of fuel. The amount of fuel that an F1 car can hold is limited by the FIA (International Automobile Federation). F1 teams always strive to put as little fuel as is necessary for the race, to keep weight down.

Usually, normal people can drive an F1 car carefully with some quick practice, but it’s not easy. Some people may be able to drive an F1 car well on the track with just a few hours of practice, while others may not be able to drive at all without significant experience. It really depends on the individual’s skill level and ability to learn quickly.

How long do F1 engines last?

Formula 1 engines are built to last at least seven races. Formula 1 teams are only allowed to use three engines throughout the season (about 22 GrandPix races). Therefore, the F1 team must on the reliability and efficiency of the engine.

How much does an F1 car cost?

The development of a race-ready Formula 1 car can cost between $150 million and $400 million, but that varies by team, engine supplier, and other factors. F1 cars are the pinnacle of motorsport technology and performance, and such come with a hefty price tag.

F1 drivers reach some pretty impressive speeds during races, mainly because they can corner quickly and efficiently. They also use the entire track, so they don’t lose speed when cornering. To achieve these high speeds, drivers must be incredibly fit and have excellent reflexes, because the slightest mistake can result in a crash or lost time.

So if you’re ever at a race, be sure to keep your eyes open for those speedy Formula 1 drivers!