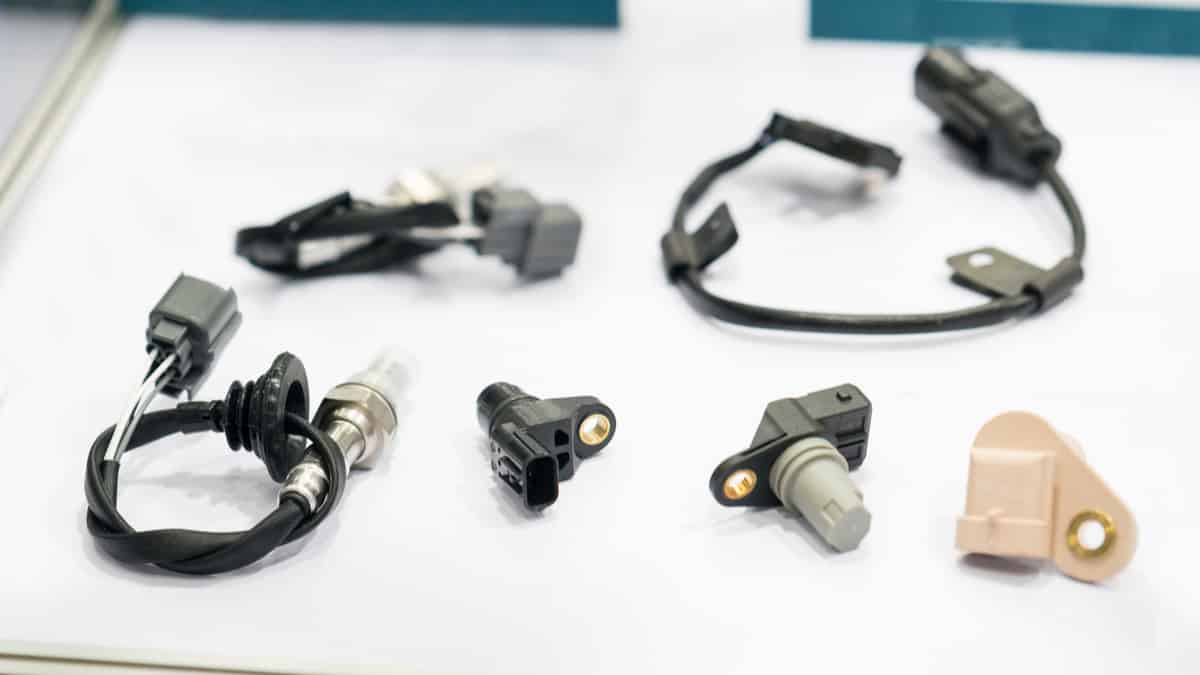 Modern car engines have anywhere from 15 to 30 sensors to keep everything running properly. These sensors control everything in the engine for optimal performance. In total, there are over 70 sensors in a modern vehicle throughout the whole car.

But while there are tons of different sensors in your vehicle – and not every vehicle has the same types of sensors – there are plenty that you can find across the board.

Below we’ve highlighted 15 of the most common types of car sensors that you can find in almost any new vehicle. Not only did we highlight what they are, but we also gave each one a brief description and highlighted how they work.

One of the most common sensors in your vehicle is the engine oil level sensor. This sensor measures the oil level in your engine oil pan to ensure that it’s at a safe operating capacity. If you don’t have enough oil, this sensor will cause an oil level warning light on your dashboard.

This sensor is often installed on the bottom of the oil pan, so you need to tap out the engine oil to replace it. This depends on the engine model, though.

The engine oil pressure sensor is often quite similar to the oil level sensor, except that it measures the oil pressure after the oil pump. You will often find this sensor located at the engine block, often near the fuel filter.

In some newer car models, the coolant temperature should shut off your engine once it reaches a high enough temperature.

Your vehicle’s engine needs to know how much air is coming in so it can optimize the fuel ratio for maximum performance. Your mass airflow sensor (MAF) measures the amount of air coming through the intake, so it knows how much it’s bringing in.

The MAF sensor is often located on the intake hose between your intake manifold and the air filter box.

Oxygen sensors, also known as O2 sensors, measure your air-fuel mixture from the exhaust and the catalytic converter’s effectiveness (CAT). One oxygen sensor measures the air’s makeup before the CAT, and one measures the makeup of the air after the CAT.

If there’s not enough of a drop in emissions, it lets the ECM know that you need to make repairs by showing a check engine light on your dashboard.

Knock sensors are there to make sure that your engine will not suffer from detonation or so-called knocking. Detonation or knock in a car engine is fatal for the internal parts, resulting in a very costly repair.

This could also be from misfires or broken components, but if your engine’s knock sensor hears something – you have a problem.

Engine timing relies on a perfect symphony between the crankshaft and camshaft – and their respective position sensors let the ECM know precisely where each one is at. If those positions don’t line up to what they should be, you need to know as soon as possible.

You do often have one sensor on the camshaft and one on the crankshaft. Some car models do only have a crankshaft position sensor, though.

The throttle position sensor tells the ECM exactly how open the throttle is. That way, if there’s a problem between the pedal and the throttle, it won’t dump a ton of fuel in and damage the engine because of a sticky throttle.

Your manifold absolute pressure sensor (MAP) sensor does exactly what it sounds like it would do – it measures pressure in the manifold. This takes your mass airflow sensor one step further by measuring how much air is actually making it to your engine. This is a critical component in fuel-injected engines as it optimizes your fuel ratios for the best possible performance.

It also takes the job from the boost pressure sensor and measures the turbo pressure, if your car is equipped with one.

The sensor itself is often quite cheap, but it can be unwieldy to replace it if you are not an experienced mechanic. (A lot of fuel may leak out).

The coolant level sensor is located on your coolant reservoir.

The boost pressure sensors are often cheap and can be easily replaced on most car models. Some car models can be difficult to access if they are mounted on the intake manifold.

How many sensors are in a car engine?

There are around 15-30 sensors in a modern car engine if you don’t include the solenoids. Overall in a modern car, you can find over 70 sensors counting every sensor in the whole car.

While this list isn’t nearly all-exhaustive of all the different sensors you can find in a vehicle – these are some of the most common and the most likely that you’ll run into problems with.

But just remember that while these vehicles might give you a few headaches from time to time, they’re preventing even more significant problems from cropping up and destroying your engine! Here is a video of the most car sensors.