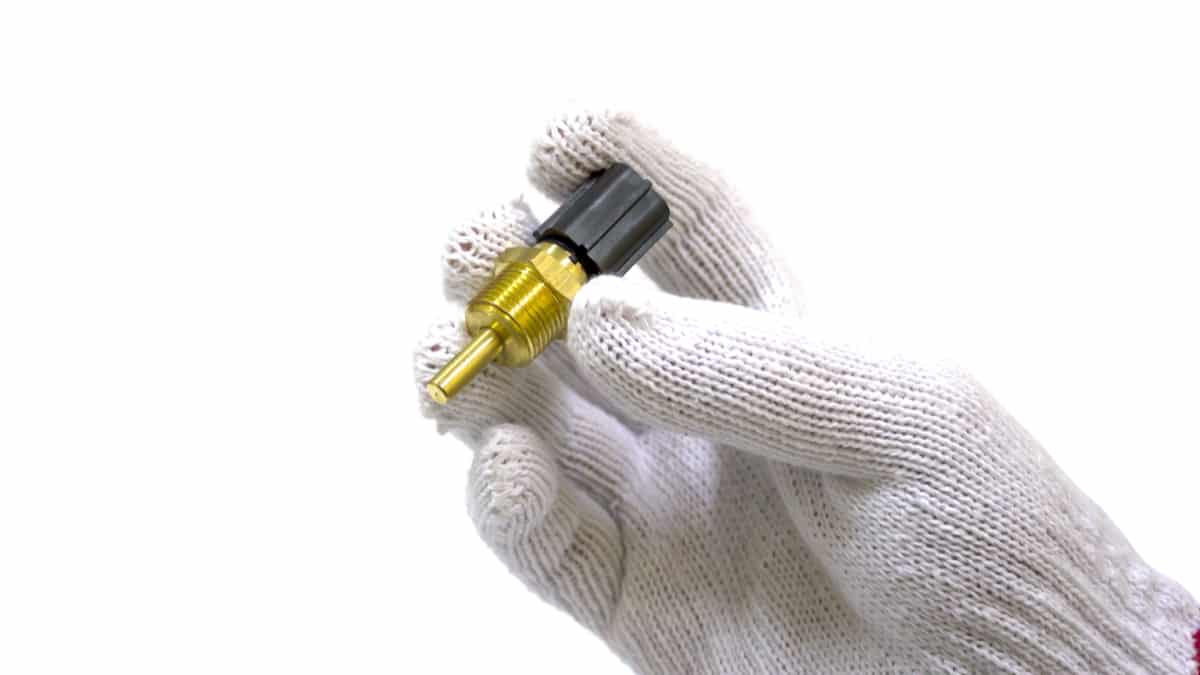 With this information, the engine control module adjusts the air-fuel mixture depending on the temperature.

Like every other component, the ECT sensor can also get damaged, resulting in several engine-related problems. Hence, it is advised to have your car inspected right away to avoid any serious problems.

This article will discuss the most common symptoms, location, replacement cost, and how to diagnose it. Let’s take a quick look at the signs:

The most common symptom of a bad coolant temperature sensor is a check engine light on your dashboard. You can also notice signs like higher fuel consumption than usual or non-working radiator fans, causing the engine to overheat at idle.

While these signs above are the most common ones, it’s are not all of them. Here is a more detailed list of the common symptoms of a bad coolant temperature sensor.

One of the first signs of all coolant temperature sensor symptoms you will probably notice is that the check engine light will show up on your dashboard.

If the computer detects any problem with the sensor’s circuit, it will illuminate the check engine light, indicating that the car needs an inspection.

If you see a check engine light on your dashboard, it is time to check the trouble codes with an OBD2 scanner.

This will cause the fuel economy to drop and decrease the engine’s performance.

3. Electrical Cooling Fans not coming on

However, if your car has a single sensor, a bad engine coolant temperature sensor may result in your fans won’t start at all.

4. Black Smoke from the Exhaust Pipe

Due to an incorrect engine temperature signal, the ECU may enrich the fuel mixture to a point where the combustion process becomes difficult.

The excessive fuel will burn in the exhaust pipe and will produce thick black smoke.

The starting moment of a car is very critical with the amount of fuel getting injected into the engine. If the air-fuel mixture is faulty, you might find your car difficult or impossible to start.

The cooling fan, which is behind the radiator grille, removes heat from the engine’s coolant. This fan is electrically controlled and relies on the signal from the onboard computer.

If the fan receives a false signal, the fan might not turn on, causing the engine to overheat. Some vehicles have a separate coolant temperature sensor for the fan, but many cars use the same sensor.

Due to a faulty ECT sensor, the fuel mixture will adjust. This will cause the engine to vibrate or shake when the car is at low speed and lead to other power losses and strange behaviours.

The engine is very sensitive to wrong air-fuel mixtures at idle and this is a condition when you might notice that something is wrong with your engine coolant temperature sensor.

If you feel that the engine performance is not what it has been before, it may be due to a faulty engine coolant temperature sensor.

What is a Engine Coolant Temperature Sensor?

The readings produced from the coolant temperature sensor are transmitted to the engine control unit, where they are utilized as data for regulating and maintaining the proper ignition time and the optimal fuel injection through the computerized approach.

The engine coolant temperature sensor is usually located on the engine block or cylinder head. It is often installed on a plastic hose on the coolant’s inlet.

Different brands and car manufacturers have different ways of placing the coolant temperature sensor depending on the car design.

Some vehicles may have more than one temperature sensor, as sometimes different sensors are used to signal to the dashboard, cooling fan control, and the control unit of your engine system.

With two sensors, we usually consider sending signals to the control unit as the coolant temperature sensor.

The coolant temperature sensor itself is often quite cheap and you can often find them around $40 for a quality one. There are cheaper ones on the market, but I heavily recommend buying a quality one like Bosch to skip the headaches.

The replacement is often also quite straightforward, except that you might have to pour out all coolant from the engine and refill it – which means that you have to remove all air from the coolant system, which can be difficult.

However, if you are fast replacing the sensor, there is often no need to tap out the coolant, but this requires some skills.

Remember to always make sure the coolant temperature is low when doing this kind of work!!

How to Diagnose a Faulty Engine Coolant Temperature Sensor?