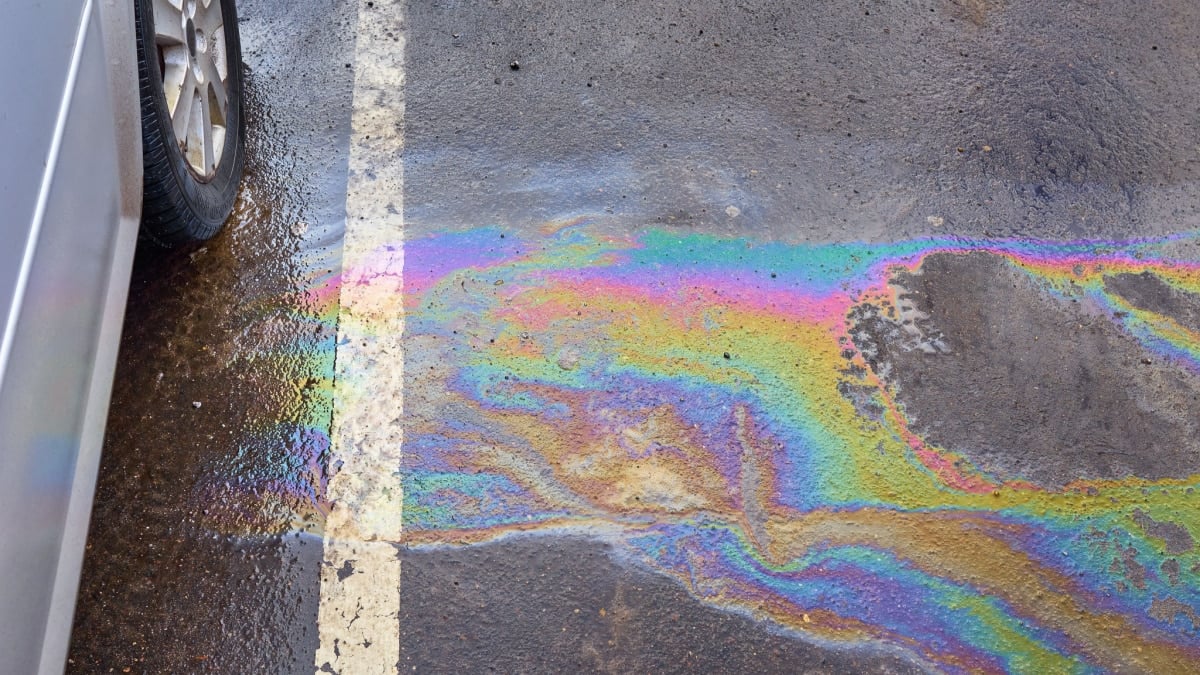 In this guide, we discuss all of these possible causes. We also look at the symptoms of a fuel leak and help you find the best fixes. At the end of our article, you will find answers to some of your top questions, including whether you should drive with a gas leak.

Causes of Gas Leaking From The Bottom Of Car

The most common cause of gas leaking from the bottom of a car is a damaged fuel tank or fuel filter. It can also be caused by broken fuel lines or defective O-rings. In rare cases, a broken gas cap can also cause a car to leak gas.

Here is some more detailed information on the possible causes of why your gas tank is leaking from the car:

However, if a hose or line breaks, the fuel may start to leak onto the ground. This rip or break won’t stop the fuel from pumping; it’s just going to change where the gas gets pumped to.

The fuel filter is located under the car in many car models and is therefore exposed to water and dirt. This can cause the fuel filter to rust or corrode and eventually begin to leak as the corrosion has penetrated the metal.

If you haven’t changed your fuel filter in a while, it’s probably time to check the filter to make sure it’s not leaking. Sometimes it can be damaged even if it is in the engine compartment.

O-rings are simple rubber seals that are fitted onto the injectors so no fuel will leak from the system. They also prevent oil from getting into the combustion chamber. Because the seals are subject to a lot of heat, they can wear out over time. When the seals become brittle, fuel can start to leak.

Why would a leak from one of these seals end up on the ground? The fuel drips down from the injectors onto the ground. You will see some of it dripping from here, while the rest can start to burn from the heat. In extreme situations, it can lead to a car fire.

The fuel tank is responsible for storing all of the gas until it gets used. When you fill up at the local station, the fuel goes right to the tank. However, this tank isn’t indestructible. If damage occurs, the tank can start leaking.

This problem can be one of the worst to deal with. Plus, you could have a big puddle of fuel below the car, leading to a much higher risk of fire.

You may think that a defective gas cap would be one of the top reasons for a leak, but it isn’t. The gas cap doesn’t necessarily hold in the fuel but is meant to contain the fumes.

Still, there’s always the chance that the fuel can leak out of the cap in rare circumstances. If this is the case, you may see it running down the side of the car until it gets underneath.

If you spend a lot of time driving down a rough road, you can are going to allow for unnecessary wear to your car. Fuel system parts can become loose during this time.

If any part of the fuel system comes loose, you will see gas leaking from this spot. If you’ve just had the fuel system repaired, the mechanic might have left something loose that simply needs to be tightened up.

Symptoms Gas is Leaking from Bottom of Car

Gasoline has a distinct smell that can’t be missed. The benzene that’s included in the gas mixture is what leads to the unique scent. This chemical is also responsible for boosting vehicle performance and improving fuel economy.

Some people describe gasoline’s smells as sweet, but they aren’t nearly as sweet as antifreeze. However, you know what to look for because you’ve smelled the same thing when you’ve pumped fuel at a station. If you only get a whiff of the smell, there may not be anything wrong. It’s only when the gasoline smell lingers that you want to start looking deeper into the problem.

Obviously, if gas is leaking under the car, you are going to see puddles pooling on the ground. However, if the car has been parked for a while, you might not see it. Gasoline dries faster than other fluids, such as oil.

Unless it’s constantly leaking, the gas might be gone by the time you look at the ground. If you suspect that gas might be leaking, it’s best to look under the vehicle often.

If gas is leaking from the car, the fuel gauge should also be affected, especially if the leak is large. If the leak is minimal, you may not notice a drop in the gauge at all.

By getting to know how your gas gauge acts normally, you will know when something isn’t right. You should also pay attention to where the fuel level is when you park the vehicle and where it is when you turn on the vehicle again.

RELATED: 5 Symptoms of Bad Gas in Your Car (& How to fix it)

How to Fix Gas Leaking from Car

It’s important to get under the vehicle to see where the fuel is coming from. Park the vehicle on solid ground that’s flat.

Use your floor jack in a secure location and raise the vehicle up. With a set of jack stands, you can further secure the vehicle.

Slide below the secured vehicle to see if you can tell where the leak is coming from. You may see the gas dripping or you could notice residue from fuel that has previously leaked.

If you are having trouble finding the leak, go ahead and put some cardboard below the car. Once you know whether it’s coming from the front, middle or rear of the vehicle, you’ll have a better idea of where to look.

If you find that the leak is coming from a seal or hose, you need to replace it. Depending on where the seal or hose is, you may have to drain the tank.

At the same time, you should inspect the rest of the hoses, lines, seals and O-rings. If you drive an older vehicle, it’s possible that other parts could be degrading at the same time. While the tank is empty, it might be easier to replace a few parts before they cause more trouble.

If you see that the leak is coming from the fuel filter, it’s time to replace it. Changing a fuel filter in most car models is quite simple and only requires a few basic skills.

If the gas is leaking from the tank, you might be able to repair it. Use sandpaper or a metal brush to determine how bad the leak is. Use a rag dipped in vinegar to further clean the area. You can use a gas tank repair kit if the hole is small enough. Follow the instructions on the kit.

Once you have completed the repairs and refilled the tank, it’s time to take a drive. Pay close attention to any unusual smells or drop in the fuel gauge. At the first sign that the tank is still leaking, stop driving and start the repair over.

If you don’t see any fuel leaking while you are driving, it doesn’t mean you are out of the water. Keep a close eye on the vehicle for a few days until you can confirm that there’s no more leakage.

Is It Safe to Drive a Car With a Fuel Leak?

You should never drive your vehicle with a gas leak. Fuel leaks can quickly lead to a car fire, putting you and your occupants in danger. Gasoline is flammable and there are multiple heat sources that could ignite it at any time. If you notice fuel leaking, park the vehicle in a secure location right away and turn off the ignition.

How Much Does it Cost to Fix a Gas Tank Leak?

The cost to fix a leak in your gas tank can vary greatly. If the damage is repairable, you may only spend $150 to $400. However, if the entire tank needs to be replaced, the cost could exceed $1,000. Don’t forget to factor in the cost of the fuel needed to refill the tank after the repair is complete.

How Do I Know What to Do if Fuel is Leaking?

If you don’t have a lot of mechanical experience, you don’t want to deal with a fuel leak on your own. Instead, it’s important to trust a professional mechanic instead. If you aren’t at the repair station, have it towed to ensure safety.

Is Replacing a Gas Tank Expensive?

Replacing the gas tank isn’t an easy job and the parts are pricey. On average, you can spend $900 to $1,200 for the gas tank itself. If you can’t put it in, the labor costs could easily add another $250 to $400 to your total. Of course, the total cost depends on what type of vehicle you drive and where in the country you are located.

If you notice a gas leak coming from your car, time is of the essence. You should never keep driving because there’s a massive risk of a car fire with this flammable substance leaking from the vehicle. Instead, pull over in a safe location and get working on the repair immediately.

To ensure a proper fix, you need to first determine where the leak is coming from. If you can tackle the repair, get the supplies and fix it up. Otherwise, don’t hesitate to reach out to a local auto repair shop that’s qualified to handle the leak for you.