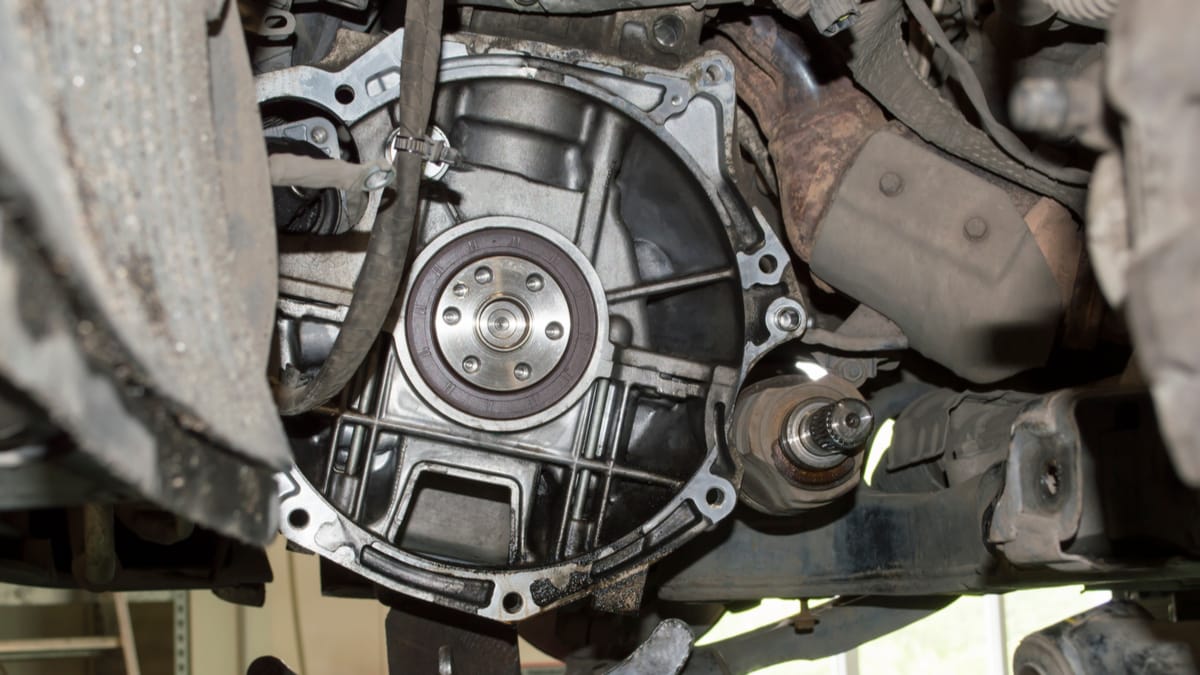 There are many reasons your car might be leaking oil, but one of the most concerning is due to a defective rear main seal. When your vehicle suffers from this issue, you are looking at a major repair. But, what are the symptoms of a rear main seal leak?

In this guide, we look at the purpose of the rear main seal and tell you what causes a leak. We also look at the top symptoms of a leak and examine what you might spend on replacing the seal.

What Are the Symptoms of Rear Main Seal Leak?

The main symptoms of a rear main seal leak include:

Here is a more detailed list of the signs of a leaking rear main seal to look for:

A defective rear main seal is going to allow oil to seep through. However, the leak might get worse after the engine has been warmed up. For this reason, you might not always see the oil leak.

It could be most prevalent after you park the vehicle by looking at the driveway or garage floor. If you see an oil stain on the driveway that wasn’t there before, you should be hunting down the source.

RELATED: Why Is My Car Leaking Oil? Common Causes (& How to Fix it)

A failing rear main seal can allow a lot of oil to leak through in a short amount of time. For this reason, you might need to continually add oil to keep the levels up. It’s even possible that you need to add a quart or more each week.

While it’s normal to add a small amount of oil from time to time, you shouldn’t need to top off constantly. Get the seal looked at before the problem becomes worse.

Sometimes, the first warning is the oil warning light. If this light comes on, it indicates that the oil pressure or level is low and you should take it seriously.

Pull over and shut the engine off. If there’s enough oil in the system to drive home, you may want to try, but use extreme caution. A rear main seal leak that is causing rapid oil loss can lead to engine failure and permanent damage.

The oil that is leaking from the rear main seal will start to pool on the bell housing of the engine and transmission. With blowback, the oil saturation might be on the underbody of the vehicle.

With a quick inspection, you should be able to see the oil all over behind the back of the engine. Once this is spotted, you want to have the vehicle looked at immediately.

If you put the wrong type of oil in the engine, it can lead to a leak. The chemical additives in today’s engine oils can affect the seals.

It’s easy to deteriorate the seals if you use a particular oil that shouldn’t be used with your engine. Plus, the seal can dry out because of the oils and become stiff over time, making room for a leak. Check your owner’s manual and only use the oil that’s recommended.

It can also be caused by too much oil in the engine.

RELATED: Conventional vs Synthetic Blend vs Full Synthetic Oil (Which to Use?)

The rear seal contains a coating of polytetrafluoroethylene. It’s meant to be put in place completely dry to create a proper seal. It’s also designed to prevent wear and seal better than silicone or Viton.

If you put oil on the seal during installation, you are asking for trouble. It may cause leaks shortly after the installation.

When the main bearing goes out on the engine, the crankshaft starts to hang inside, causing stretching of the seal while the engine runs. The seal isn’t meant to be stretched and pulled on, so it’s bound to leak.

However, you are going to have a fair warning that the main bearing has gone bad. There should be an immense amount of noise with this failure and there’s no reason to keep driving your car with this problem unresolved.

The surfaces must be identical for a uniform fit. If the crankshaft surface doesn’t fit perfectly, it needs to be repaired.

The rear crankshaft seal is riding on the shaft. If there is an excessive amount of pressure coming from the crankcase, it can cause the seal to leak.

A clogged positive crankcase ventilation system can lead to this increased pressure. If left unchecked, it will push on the seal, leading to a leak.

It doesn’t matter what type of transmission your car has, both automatic and manual cars can suffer from misalignment. Any misalignment of the flexplate or transmission’s input shaft can cause stress to the seal.

A quick inspection of the flexplate on the automatic transmission can reveal this defect. If you are driving a manual transmission, you need to inspect the input shaft instead.

When the seal isn’t working correctly, the oil can escape from within the crankcase. This problem leads to a leak that can range in severity.

The rear main seal is found at the back of the car engine. They are driven into the rear cover and can be concealed in the transmission’s bell-housing, making it more difficult to see. In most cases, it is not viewable without removing other critical components, even the transmission at times.

The rear main seal is usually located opposite of where the belts and pulleys are located. These parts are typically at the front of the engine.

The cost to replace a rear main seal is usually between $800 and $1,500. However, the seal itself can cost as little as $50. The rest of the cost is because of the immense amount of labor associated with this job.

In most cases, the transmission needs to be removed. For this reason alone, it’s not a job that is easily performed in the home garage. Here is how to replace it once the transmission is removed: