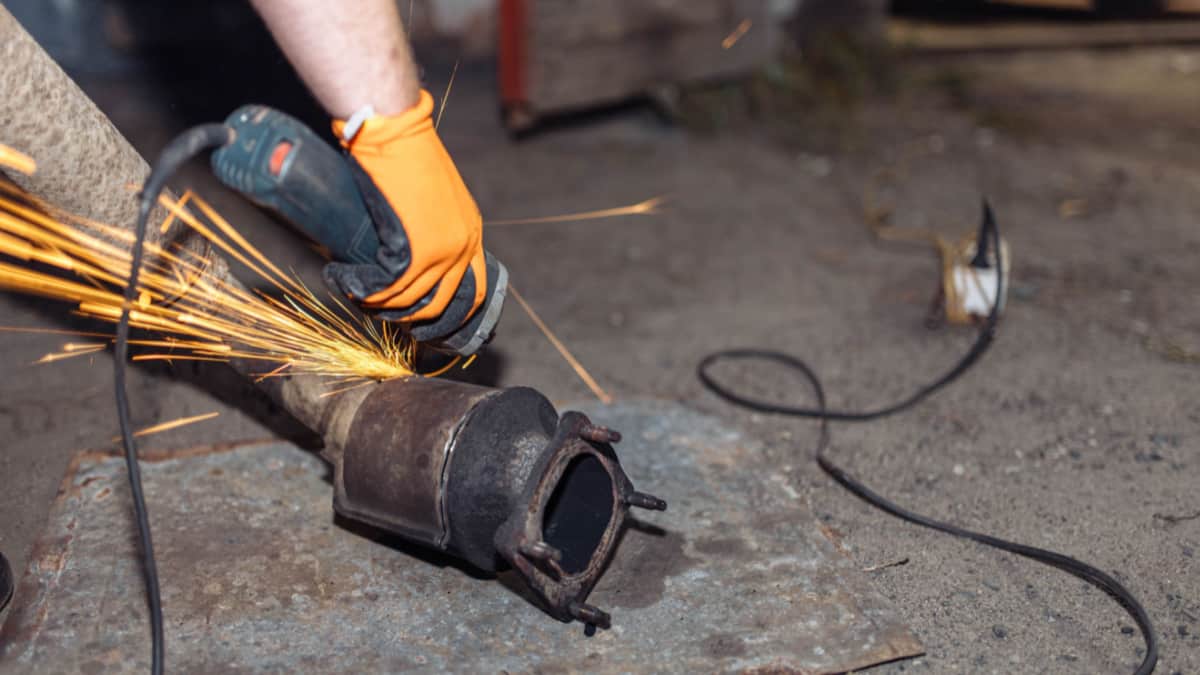 It might sound like a good idea to perform a catalytic converter delete, but there are some things to consider before proceeding forward. You want to evaluate both the pros and cons of the cat delete to ensure it’s what you want to do.

In this guide, we evaluate all of the pros and cons in-depth, so you can make a better decision. We also explain what the catalytic converter delete is.

What is a Catalytic Converter Delete?

The catalytic converter delete will add more horsepower and create more noise. It also reduces engine temperature and allows for better fuel economy. However, it’s illegal, can cause the Check Engine Light to come on and will make it impossible to pass an emissions test.

In some cases, people choose to remove the catalytic converter without doing anything extra. Otherwise, the part can be replaced with a straight pipe.

By taking the converter off of your vehicle, you can quickly increase the horsepower. By taking off the catalytic converter, the exhaust gas can exit faster, leading to less engine backpressure.

By creating more airflow space, a better mixture can get into the combustion chamber. As combustion happens faster, more power is produced.

The same is true about the engine temperature without a catalytic converter. As the engine faces fewer burdens because of the quicker release of gases, more inflow occurs.

With more flow of air into the combustion chamber, the engine remains more optimized. Therefore, the operating temperatures drop significantly.

Taking off the converter is going to create better fuel economy for the same reasons we’ve already explained. With a reduction of engine backpressure and a lower temperature, the vehicle runs more efficiently.

As the burden on the motor is lessened, it will need fewer fill-ups. This is a good consequence to face, especially in light of higher gas bills.

To properly take care of the catalytic converter, you need to use a certain unleaded fuel. Otherwise, the lead-based fuel could create internal damage to the catalyst material.

However, when you remove the catalytic converter, there’s the option to use other fuels. You can upgrade to something geared for high-performance instead, such as leaded racing fuel. Just make sure that you only use fuels approved by the manufacturer.

With the modern vehicle, the catalytic converter helps to muffle some of the exhaust sounds. It helps to reduce the way the gases impact the engine as they leave the combustion chamber and exit the vehicle.

With the catalytic converter removed, the sound coming from your vehicle becomes louder. However, this can also be seen as a con, which is why we’ve included it below as well.

If you are a home mechanic, you should be able to get the catalytic converter off on your own. To get the converter off, you need to remove the oxygen sensor first. If you don’t have the right wrench, you may be able to borrow it from the auto parts store.

From here, you must take the catalytic converter off. Unbolt it and slide it off of the exhaust pipe. If it’s welded, you may need to saw it off. You can also install a straight pipe after taking it off.

Removing the catalytic converter is illegal. Because of EPA regulations, you can receive tickets and costly fines for taking off the cat.

Even if you aren’t taking your car for an inspection, you could still face trouble. The police have the right to pull you over and fine you.

The catalytic converter protects the atmosphere from dangerous toxic exhaust gases. It’s meant to convert the gases into something less harmful.

When the catalytic converter is taken off, the vehicle pumps all of these toxins into the air. You are only further contributing to damaging the environment at this point.

With the catalytic converter off and these gases hitting the air, you are going to have trouble passing your state’s emissions testing. While it’s not required everywhere, most people have to deal with this aspect on a yearly or bi-annual basis.

You aren’t allowed to legally drive on the road with a failed emissions test. For this reason, you could face costly fines.

Once the noise of the car reaches a certain level, it can be considered noise pollution. This excessive noise can be damaging to your ears.

Additionally, you might be disturbing others in the neighborhood. If the noise is higher than a certain decibel rating, you can also receive a ticket for disturbing the peace.

Any interference to engine operations can cause a malfunction with the sensors. When you remove the catalytic converter, you may see the Check Engine Light come on. Some cars have a workaround, allowing you to fit a spacer into the downstream oxygen sensor.

This lambda sensor can cause the system to read normally, so the Check Engine Light doesn’t come on. However, this doesn’t change the fact that the system isn’t running as it should.

While you can perform the catalytic converter delete at home, you still have the costs to deal with. Even doing the job at home could cost you $50.

If you choose to have a professional help you, the cost could be $300 or more. You can expect to pay a higher bill if the cat needs to be sawed off.

Is It Legal to Remove the Catalytic Converter?

It is not legal in any state to run the vehicle without the catalytic converter. You want to reference the laws in your state to find out what you can legally do with the emissions system, but regulations continue to get stricter.

For example, no state is quite as strict as California. In this state, you can’t even install exhaust parts that lack the state’s certification. The easiest solution to these problems is to keep your vehicle as it was from the factory.

Can I Drive Without a Catalytic Converter?