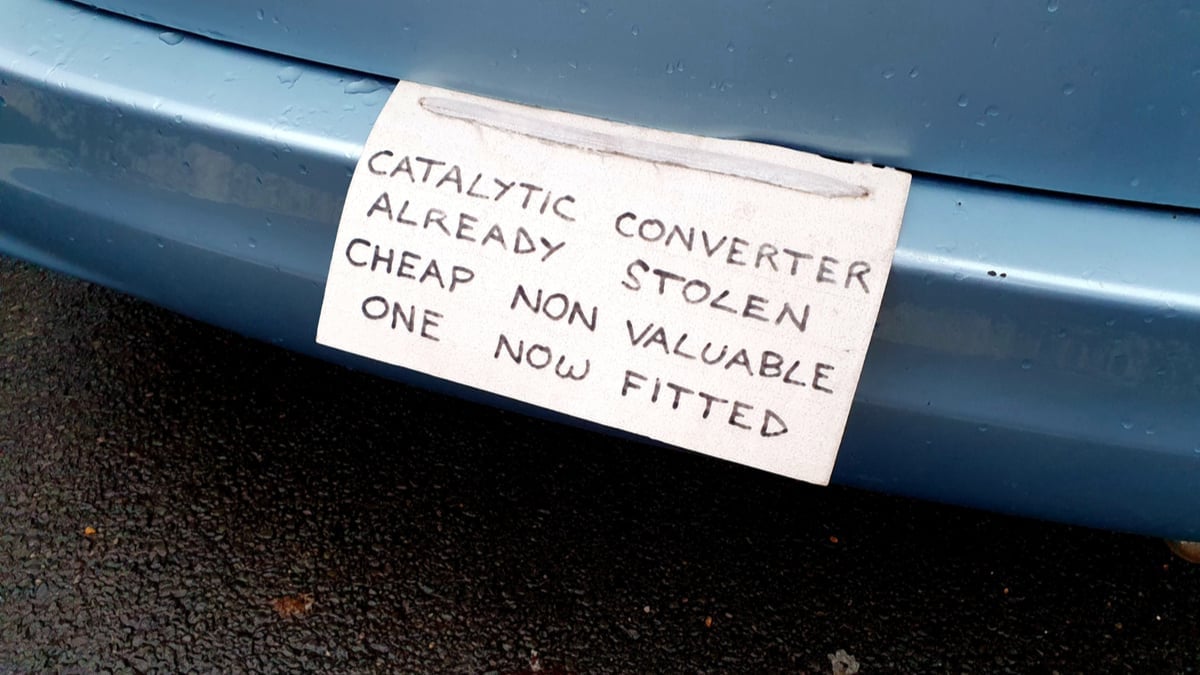 You might not think about the possibility of your catalytic converter being stolen when you first buy a car, but you probably should.

As it turns out, some car models are more likely to be targeted by thieves than others, and they are often very expensive to replace.

In this blog post, we’ll take a look at which cars are most and least likely to have their catalytic converters stolen. So if you’re concerned about this potential threat, read on!

Why Do Thieves Steal Catalytic Converters?

Today, palladium continues to cost $2,500 per ounce, and this is just one of the minerals found inside catalytic converters. In fact, this price has skyrocketed right past the value of gold.

American brands such as Ford, Chevy, Jeep, Dodge, and Chrysler tend to have less valuable catalytic converters and are therefore less likely to get stolen. Some Nissan, Hyundai, Mazda, and Subaru models also fall into this category.

Many brands used cat designs that limited how many precious metals were inside. Thieves tend to do enough research to know to stay away from these brands.

2. Cars with Converters in the Engine Compartment

Several cars have installed the catalytic converter in the engine compartment instead of further back on the car’s exhaust system. This design makes it much more difficult for a thief to steal it.

No thief wants to put in the extra work to get to these cats, so they will move on to a different model. Many car models like Audi, BMW, Honda, and Volkswagen models fall into this category.

After that time, the government took action to clean up the emissions. Therefore, it became mandatory for vehicles to have a catalytic converter.

Because the car isn’t emitting gaseous waste, there’s nothing to clean. Plugging into a power source to charge the battery isn’t going to use any gas or diesel power. Volkswagen e-gold, Audi E-Tron, and Tesla models are some popular choices.

Diesel converters or so-called particle filters aren’t normally constructed with rhodium, palladium, or platinum. Since these are the precious metals that thieves are looking for, they will often move on from the diesel vehicle.

Bead cats are filled with beads. Most expert thieves know which cars contain these catalytic converters because they aren’t worth anything, even though they are larger in size.

Chevy was known for using a bead converter. Additionally, some other GM models can be found with this type.

Cars Most Likely to Have Catalytic Converters Stolen

The cars that are most likely to have their catalytic converter stolen are hybrid cars like the Toyota Prius. Trucks and SUVs are also very targeted due to the large engines (valuable catalysts) and the high ground clearance, which provides easy access to the catalytic converter.

If the vehicle is focused on providing clean emissions, the converter is likely more expensive. To keep the environment cleaner, the automaker will install cats with higher concentrations of palladium.

Additionally, because the car already runs cleaner with the help of an electric motor, the cats aren’t used heavily. Of course, this design also adds to a higher price for the car. Toyota Prius is one of those examples that are highly targeted to catalytic converter thefts.

There are two reasons that larger SUVs and trucks tend to be targeted. The bigger engine requires a more valuable cat for emissions standards.

Additionally, the height of the vehicle makes it easier for thieves to reach the catalytic converter. With less time needed to get the job done and a good payday ahead, these are some of the most targeted vehicles. Ford F-250 and Toyota Tacoma are two great examples of this.

Many luxury cars have very valuable catalysts and sometimes more than one per engine due to the V-10 or V12 engines. If you look at the most expensive catalytic converters on the road today, you will see that the Ferrari F430 converter can fetch a price of over $3,500. Plus, this car contains two converters, making it a great payday for the unethical person.

Lamborghinis are also known for having expensive catalytic converters. Some of the lineup’s cats can sell for more than $3,000. However, these cars usually have a very low ground clearance and are often parked in a garage, so it’s more difficult for thieves to steal those.

If you get a car that’s a couple of decades old but still after -74, you are going to see more costly catalytic converters installed. That’s because the overall eco-friendliness of this vehicle wasn’t a top concern.

These cars contain larger catalytic converters with a higher level of metals included because of how poorly the emissions were. These are going to be more valuable than any off of a newer, more efficient car.

Before you purchase a vehicle, do some research to see how much it is targeted. If you are considering two different models, this could be the deciding factor.

This is an important step to consider, especially if you are strapped for cash. If you put out the last of your money to purchase a car, you won’t have the funds to replace the catalytic converter if it gets stolen.

There are different anti-theft devices you can install to prevent the cats from being stolen. Some people choose the steel shield that makes it harder to remove.

There are also steel cages and steel cables that can be attached. Either way, you might spend $200 to $750 to have one of these devices installed.

Obviously, the best place to park your vehicle is in the garage, where thieves can’t get to it. However, covered parking isn’t always feasible, especially when you are out and about.

When you park in a public location, make sure it is busy and well-lit. This step protects your catalytic converter and you car, in general, from any theft or vandalism.

You can also make it less attractive by painting or removing the VIN on the converter. Most thieves know they will have a harder time selling one of these.

If you can adjust the sensitivity of a car alarm, this could be your best defense. Many car alarms will offer settings that go off when people get close to the vehicle.

The key here is to ensure you don’t become complacent with how much more the alarm goes off. You will need to continue taking every alarm seriously and check out what’s going on.