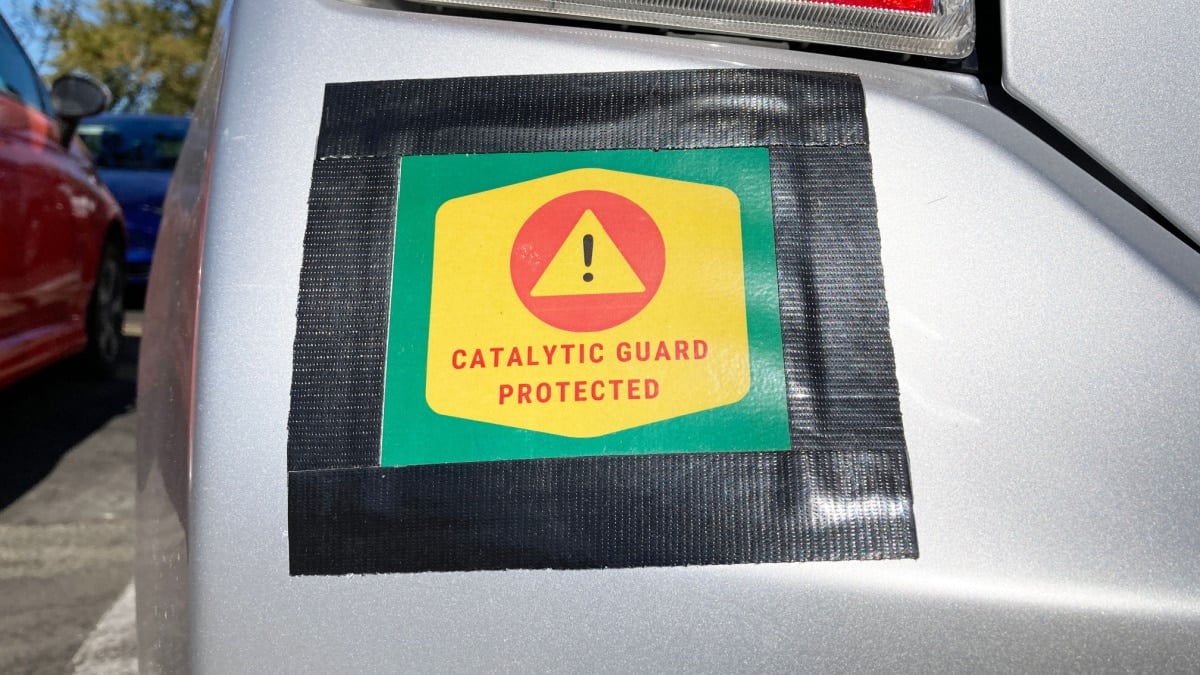 In this guide, we look closer at the catalytic converter to determine what its purpose is. We also show you why people steal this vital part and we give you an estimated worth for the component. At the end of the guide, we talk about how thieves steal the converter, we show you how to identify if you’ve been a victim and there’s a list of cars that are most susceptible to theft.

Why Do People Steal Catalytic Converters?

What is a Catalytic Converter?

The catalytic converter is a part of the car’s exhaust system. It’s located between the muffler and the engine. Its purpose is to reduce how many harmful contaminants get into the atmosphere because of the engine exhaust.

Inside the catalytic converter, there are precious metals that help to create a reaction, converting nitrogen oxide, carbon monoxide and hydrocarbons into carbon dioxide and water vapor. In some vehicles, you can find multiple catalytic converters, but every automobile produced since 1975 has at least one.

How Much is a Catalytic Converter Worth?

Last year, the going rate for platinum was $1,100 per ounce, while palladium was worth $2,400 an ounce. Additionally, rhodium has an average worth of $18,000 per ounce. Therefore, it doesn’t take a lot of these precious metals to be worth a lot of money.

The worst part of the situation is that you need to replace the catalytic converter after it has been stolen. You are going to pay far more for a new catalytic converter than the thieves received by selling your old one. Depending on what type of car you drive, you could easily spend $2,000 or more on a new converter, and that’s not including the labor to put it on.

If you need to replace more than one cat, the price goes up proportionally. For this reason, it’s wise to have an insurance policy that covers theft, just in case the catalytic converter gets stolen.

How are Catalytic Converters Stolen?

With a hand saw, the thief can get the catalytic converter off in just minutes. You won’t even know that the cat has been removed until you start the vehicle.

How Do You Know if the Catalytic Converter Has Been Stolen?

Once the cat is removed, there’s nothing stopping the exhaust from sounding raw and unfiltered. When you crank the engine, you should hear a loud roaring that startles you. This sound only increases when the car accelerates.

Once you get over the loud roar, you might take a look at your dashboard and see that something has changed. Without the catalytic converter intact, the Check Engine Light is going to come on.

This Check Engine Light indicates that a fault has been found. With your code scanner, you’ll see a fault related to the catalytic converter.

Aside from the engine noise, there could also be some performance issues. Not only will the noise get louder as you accelerate, but so will the performance complaints.

Among the top complaints is an engine that sputters. The car may also not drive smoothly, causing the ride to be embarrassing and uncomfortable.

The catalytic converter is meant to decrease emissions. Without it, the harmful gases are going to be prevalent in the exhaust smoke.

For this reason, you could notice an increase in exhaust smells. The car also won’t pass an emissions test without the cat.

Because the thieves are in a hurry to remove the catalytic converter, it’s likely that the job wasn’t well done. For this reason, you might notice some pieces hanging down under the car.

As you approach the vehicle, it might be possible to see the pieces. This condition should indicate there’s a problem before you even start the car engine.

RELATED: Can You Drive Without A Catalytic Converter?

What Cars are Most Targeted for Catalytic Converter Theft?

USA Today recently did a study identifying the most common vehicles to be targeted for catalytic converter theft. To determine these vehicles, service records were pulled from more than 60,000 repair shops around the county dated between 2019 and 2022. Additionally, CarFax helped to put together this compilation.

If you have one of these vehicles, you are most at risk for cat theft.

There are also some classifications of vehicles that are more prone to catalytic converter theft. For starters, hybrid vehicles continue to rise as victims. The Toyota Prius might be the most well-known, but all of them are susceptible. These converters often have higher levels of precious materials included, making them worth a higher cost.

Additionally, trucks and SUVs are a target, but not necessarily because of their worth. With an increased ride height, thieves can get under the vehicle without a lot of work. Without the need for a jack, the thief can hide underneath without anyone seeing. Once under the vehicle, it takes a fraction of the time to remove the catalytic converter and get on their way.

Finally, you have luxury cars and supercars to consider. These catalytic converters are naturally worth more and the cars tend to use more than one, thereby doubling the profit for a thief without having to do much more work. Sadly, these are also some of the most expensive cars to replace the catalytic converter.

READ MORE: Which Cars Are Most and Least Likely to Have Catalytic Converters Stolen?

How much do thieves get for a stolen catalytic converter?

Thieves will get between $75 and $1000 for a catalytic converter, with most of them around $200. How much the thief gets from the catalyst depends on the type of catalyst and how much precious metals it contains.

What happens if my catalytic converter is stolen?

What is the best catalytic converter anti-theft device?

No, the majority of mechanics do not steal catalytic converters. Of course, there are bad people in all professions, but most mechanics are honest people.