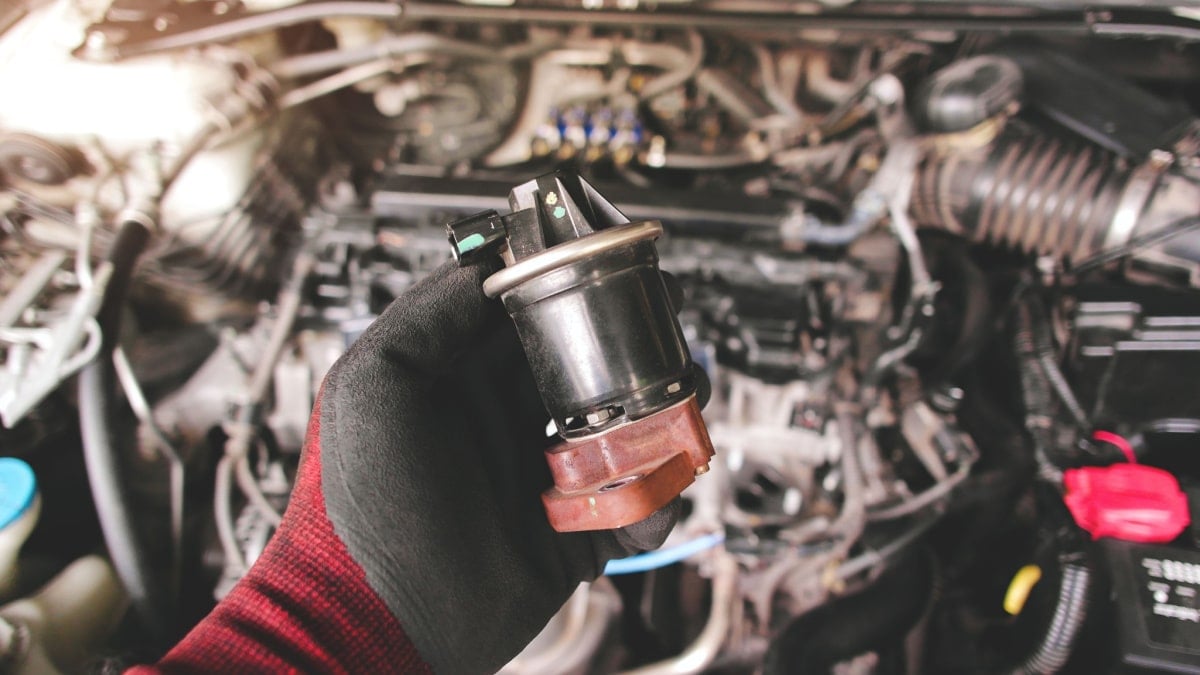 If you are looking for ways to increase the performance of your vehicle, you might have considered the EGR delete. What is this modification and will it actually benefit you?

In this guide, we discuss the basics of the EGR delete. We also examine the pros and cons of the modification to help you decide if it’s the right path for you. At the end of this article, we review the average cost for the job and discuss whether it is legal to perform.

What is an EGR Delete?

The EGR delete simply means that the vehicle’s exhaust gas recirculation system has been removed to make room for an aftermarket kit. The EGR valve gets removed, so exhaust gases get re-routed from the engine. Typically, these exhaust gases would be used in the engine for further combustion.

When you do an EGR delete, you remove the EGR valve and replace it with a part that blocks the EGR passages. If you have a modern car, you will also need to reprogram the ECM software to work without the EGR system.

When you remove the EGR system from a car, the engine’s air-fuel mixture gets a big boost in oxygen density. In many engine types, this boost is only going to increase the horsepower noticed from the motor.

To get the most boost, an EGR delete should be done on an older vehicle. These models have fewer sensors and systems set up to regulate what happens during an imbalance. We will discuss what happens with newer cars in a minute.

The purpose of the EGR system is to redirect exhaust gases back into the engine to be reused. However, this system isn’t always the most efficient option.

In some cases, sending the exhaust gas away from the engine can prove to be more valuable. With the right aftermarket kit installed, you could see a small boost to the fuel economy, thereby helping you save money at the pump.

EGR valves are known to hold a lot of soot. If the coolers or valves become clogged, the exhaust gases find a way around, thereby leading to a blockage. Because of this problem, temperatures in the motor naturally begin to rise and you could notice a lack of power.

However, when the EGR system is bypassed, there is less soot buildup. Your engine will run at normal temperatures and you no longer have to worry about clogs.

With the EGR delete re-routing the exhaust gas away from the engine, everything starts to run a little cleaner. You notice a jump in efficiency and the temperatures remain normal.

Because of these two perks alone, you can expect a longer engine life overall. Without clogs and soot buildup, there’s less to go wrong with the motor, thereby ensuring you can drive more miles.

It isn’t just the optimized motor that keeps more money in your pocket. Without the EGR valve intact, you have fewer repairs to worry about.

When the EGR system becomes damaged or defective, you could look at a hefty repair bill. Without it, there’s nothing to budget for.

1. Bad For the Environment

The whole purpose of the EGR valve is to recirculate some of the exhaust gases back into the engine again for another combustion. This is to reduce emissions from the engine and ensure the car will pass all emission tests.

If you remove the EGR system, it’s therefore also quite obvious that it will be bad for the environment when the exhaust gases are not reused. If you have a yearly smoke test where you live, you can also run into problems if you removed the EGR system and your car may not pass the smoke check.

This will also cause you to run into some legal issues when doing an EGR delete, which we will discuss a little further down in the article.

The EGR delete kit works much better with an older diesel motor. In the older generations, the engines have a flaw, allowing for a bypassed route to supply cleaner air to the mixture. This cleaner air allows for more horsepower.

However, the modern motor isn’t always going to have the same benefits. Using an EGR delete kit on one of the diesel motors might actually provide a reduction in horsepower because it’s not designed to work that way.

To ensure that your engine will not lose horsepower, you need to install a good EGR delete software after you remove the EGR valve.

This could be seen as a benefit or disadvantage, depending on how you look at it. When you perform an exhaust gas recirculation system delete, the sound of the engine can appear slightly louder on idle.

This is because the EGR system minimizes the noise coming out of the engine when it recirculates a portion of the exhaust gases. However, this slight increase in noise at idle will not be noticeable on most car models, but you should still be aware of it.

The car engine is meant to work as it was designed. When you take off valuable parts or re-route any aspect of the system, there’s always a chance for disaster to strike.

As one example, it’s possible for the engine to start knocking once you perform an EGR delete without the right software for your car. To fix this, you might need to reinstall the EGR system back to factory specifications or install a new software made for an EGR delete. Otherwise, you could be allowing permanent damage to the engine, which is costly to repair.

Is the EGR Delete Legal?

It’s illegal to delete the car’s exhaust gas recirculation (EGR) system in all fifty states. Across the US, there are laws in place that are meant to be the standard for road vehicles. One of the main requirements for a vehicle to be registered for road use is that it has a functional EGR system.

If not, it shouldn’t be driven on the streets. The government enacts these laws to ensure the country and environment are all adequately protected. For the same reason, most aspects of the car emission system are not to be tampered with.

While these laws won’t stop you from finding someone to help with an EGR delete, you should consider what you are doing before moving forward. If you proceed with the EGR delete, you could face fines if you are caught. It could also be difficult to pass a vehicle inspection, depending on how strict your state is. Beyond that, it’s not legal to sell a vehicle in most states if you’ve tampered with the emissions systems.

How Much Does An EGR Delete Cost?

On average, you can expect to spend $100 to $1000 for an EGR delete. Of course, this cost has several factors involved that make a big difference. Obviously, the type of vehicle you are driving matters. It also depends on which type of software you are going to use.

Usually, the parts for an EGR delete will be very cheap, as you usually only need a piece of metal to block the EGR passages when you remove the EGR valve. You can also do this part yourself at home with a few basic tools, depending on the car model.

The costly or difficult part comes when you need a software to compensate for the EGR removal if you have a modern car. With a few basic diagnostic tools, you can download a ready-made EGR removal software online for your car model. However, this is risky, and you can burn your ECM.

Therefore, it’s often a good idea to let a professional tuner make a custom EGR delete software for you. This can cost anywhere between $100 to $1000 depending on where you decide to get the software done.

Does an EGR delete need a tune?

Yes, if you have a modern car, you need to tune the software after removing the EGR valve. There is either ready-made software you can download to your vehicle, which can be risky. Therefore, it is recommended to have a professional tuner remove the EGR function from your car’s software.

Is it good to delete EGR?

Will an EGR delete cause black smoke?

Removing the EGR can definitely cause your car to create more black smoke. This is especially true if you haven’t installed a good EGR removal software or haven’t upgraded the software at all. However, this is much more common with diesel engines.

Can an EGR delete damage the engine?

Yes, removing the EGR without installing good software for your engine control module can lead to engine damage. This is especially true if you install software downloaded from a random internet forum, which can do more harm than good.

Although EGR removals are healthy for most car engines and will extend the life of the engine, you should remember that they are done to save our environment. Therefore, it is important to look at both the pros and cons before choosing to remove your EGR valve.

I hope this article helped you with your EGR removal decision and that you now have the knowledge to understand what will happen when you remove it.