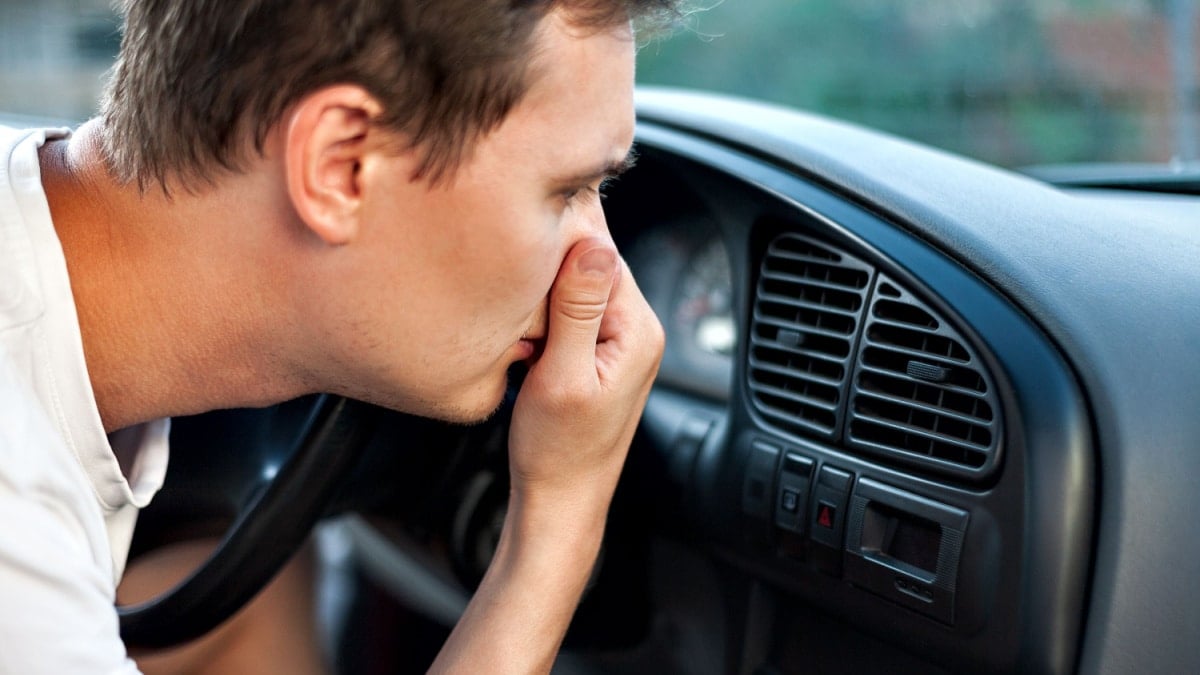 Even if you take the time to wash and detail your car, you can still face a time when it smells bad, especially if there’s some sort of mechanical failure.

If you notice a rotten egg smell in the car, it’s a sign that something needs your attention. If the car smells like rotten eggs, you want to take action quickly, not just for your sanity, but also to ensure mechanical integrity of the vehicle.

In this guide, we evaluate the causes of the rotten egg smell in your car and we discuss how to fix it. We also briefly touch on some other noxious car smells that indicate there’s a problem right before we answer your top questions.

Most times, the rotten egg smell is caused by a bad catalytic converter. It can also come from an overcharging alternator, a failing battery, or bad transmission fluid. Although, you should never overlook the possibility of a dead animal or an actual rotten egg being in the vehicle.

Here is some more detailed information on what can cause a rotten egg smell in your car:

The most common reason that a car smells like rotten eggs is because the catalytic converter has failed. This vital part is needed to convert chemicals coming from the engine into elements that are harmless.

When the converter gets clogged or it can no longer handle the chemical reactions, you will start to smell rotten eggs. This smell stems from the sulfur dioxide that comes out of the exhaust. Plus, if the catalytic converter fails, you are sending dangerous gases into the atmosphere. The Check Engine Light will come on and your vehicle could fail an emissions test.

READ MORE: 9 Symptoms of a Bad or Clogged Catalytic Converter

Sulfur smells can occur when the battery acid starts leaking. If there’s a leak from the battery, this is a sign that the battery is failing.

Batteries that produce hydrogen sulfide gas will produce odors similar to rotten eggs or sewer water. This typically happens when the battery gets old and can no longer hold a charge.

The alternator charges the car battery with between 12.5 and 14.8 volts, depending on the car model. But if there is something wrong with the alternator or the voltage regulator, it can charge the battery with more than 15 volts.

If the alternator overcharges the car battery, it can cause the battery acid to “boil” which will cause a rotten egg smell. This is also very dangerous because there is a risk that the battery will explode.

If you drive a vehicle with an automatic transmission, you must make sure you are providing regular changes. If not, the fluid can get old and start to cause problems. The seals will lack lubrication and a leak can occur.

Leaking fluid can smell like a multitude of different things, but some people say it is similar to rotten milk or eggs. To rule out this problem and to keep the transmission in good shape, change the fluid and install new gaskets and seals.

Up until now, the smells have been chalked up to a mechanical failure. That’s because those are the most common issues leading to rotten egg smells. Still, you don’t want to overlook some obvious conditions that might be occurring.

If a mouse or other animal has made its way into your HVAC or exhaust system, you could also smell something rotting. These problems occur more frequently when it’s cold outside and the animal needs shelter or when the vehicle is in storage. When you start up the engine, you may kill the animal if it can’t escape. As the body decomposes, you are sure to notice the smell.

RELATED: How to Get Rid of Skunk Smell From Your Car (Exterior & Interior)

What could cause a rotten egg smell more than an actual egg that’s rotting? Hopefully, you haven’t left groceries unnoticed in your vehicle for too long, but it could happen, especially if the egg rolled under a seat or in a crevice.

You can prevent this problem by regularly cleaning out the inside of the car. Not only will the interior look nice, but you will also avoid any terrible odors in the future.

How to Fix Rotten Egg Smell in Car

If there’s no Check Engine Light on, you want to start by looking over the vehicle. Clean out the entire interior to see if you can find any offending food that might have spoiled. While you do this, you may as well vacuum and clean off the seats too.

If there’s nothing in the car, give a good whiff outside the car to see if you can tell where the odor might be coming from. If you can pinpoint an odd spot where it smells, the problem could be a dead animal trapped in one of the systems. You need to remove this animal if you want the smell to go away.

Depending on where the animal was able to travel to, parts might need to be removed to get to it. If you aren’t sure what you are working with, take the car to a professional.

As we talked about before, an overcharged or bad alternator or a bad car battery are two common reasons why your car smells like rotten eggs. Therefore, you want to measure the alternator to ensure that it is not overcharging the battery.

You will also want to inspect the health of the car battery to ensure it is in good condition. If you see anything wrong with the alternator or battery, you need to replace them.

If the Check Engine Light is on, you know there’s something mechanical going on. Hook up the code scanner to see where the fault is.

If you don’t have a code reader, you can go to the local auto parts store for a free scan. Research the trouble codes to see if this shows you the problem.

If there is a multitude of trouble codes, you might do better to erase them and drive the car again until the light comes back on. Once you rescan it, you will have a better idea where the problem lies.

If your transmission fluid hasn’t been changed in a while, it’s time to check it. Pull out the fill plug and give the fluid a whiff to see what it smells like. If it smells burnt or unnatural, it’s time to change it.

Perform a transmission fluid change and run the car again to see if the smell disappears. If there’s a leak, you want to fix this before the fluid gets changed.

Once you’ve figured out what’s wrong with the car, it’s time to repair it. With some tasks, you might be able to perform the repair at home. For example, if you determine that the battery is old, you will probably be able to replace it on your own. Otherwise, most auto parts stores will swap it out for free if you purchase the battery from them.

Replacing the catalytic converter isn’t normally a tough job to perform, but the part is expensive. Your other fixes shouldn’t cost nearly as much.

Additional Car Smells That Are Alarming

No one ever wants to smell burning oil. It’s normally an indication that oil is getting too hot or is leaking and landing on exhaust parts. Start by checking the oil dipstick and give it a whiff. You also want to examine the system for any signs of leakage and repair it before refilling the system.

It’s normal to smell gasoline while you are filling up at your local station. However, the smell should dissipate shortly after you pull away. If the odors persist, there could be something wrong.

First, rule out that gas didn’t get spilled on the car or your clothing. If it did, you want to clean it up right away. Otherwise, there could be a leak in your vehicle. Don’t continue driving with a fuel leak present or you are at risk for a car fire.

The belts and hoses on your vehicle are constructed of rubber. If one of these belts or hoses comes undone or starts to touch hot components, melting can occur.

Burning smells can also come from the electrical system, mimicking many of the same odors. You could have a burnt electrical fuse or another vital component. To be safe, it’s best to determine what’s burning before you continue driving.

If antifreeze is leaking, you will smell something sweet, like a syrup. Coolant can leak from the heating system or radiator.

Coolant is dangerous to kids and pets, but it’s very desirable because of the smell. That’s just one reason to fix the leak immediately.

Is It Safe to Drive a Car That Smells Like Rotten Eggs?

If the smell is coming from groceries left in your car, there’s no danger to driving. However, mechanical failure should always be dealt with immediately, whether it is an overcharging alternator or a bad catalytic converter. Additionally, if the problem is the transmission fluid, you could allow further damage if you don’t resolve the situation right away.

How Can I Stop My Car From Smelling Like Rotten Eggs?

If the smell is coming from a faulty part, you need to replace it. That’s the only way you will avert the odor. Otherwise, you should clean out your car and get rid of whatever is causing the odor before it overpowers the cabin.

What Does it Mean When Car Exhaust Smells Like Rotten Eggs?

Most often, it means that the catalytic converter has failed. Because the chemical reaction can’t occur normally, you are left with the sulfur smell. Otherwise, the problem could be an overcharging alternator, bad transmission fluid, as well as rotting food or animals. All of these problems can be resolved to remove the smell.

There’s no reason to live with a rotten egg smell in your car. If cleanliness is the concern, you can fix this quickly with a simple cleanout. These cleanouts can also help you track down a dead animal that is rotting in the systems.

Otherwise, you might be looking at a mechanical issue that needs to be repaired. If you have the right tools and expertise, you can repair the problem on your own in your home garage.

Otherwise, reach out to a professional. You will be happy that the smell is gone. Plus, your car will run better while your work helps avoid future mechanical failures. The sooner you diagnose and repair the problem, the lower the chance is that you will face bigger problems down the road.