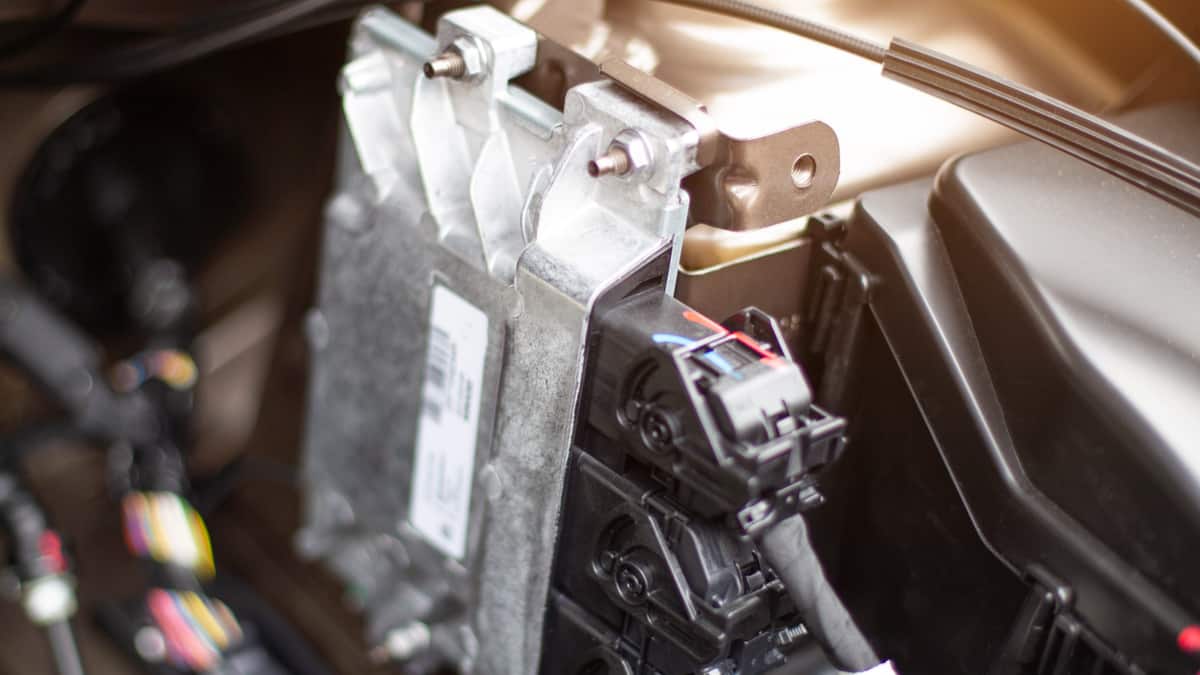 Whether you like it or not, your vehicle is filled to the brim with computers. While these computers are a dream come true when everything is working the way they should, they can quickly turn into a nightmare when circuits start to fail.

Luckily for everyone, these computers rarely fail. Because when they do, they’re expensive to replace. One of those magical computers is the Powertrain Control Module, and as the name implies, it controls everything in the powertrain.

In this comprehensive guide, we’ll break down everything you need to know about your PCM and what you need to do if it starts acting up. Let’s start with a look at the signs to look for.

Table Of Contents show
Symptoms Of A Bad Powertrain Control Module (PCM)
1. A Check Engine Light
2. Poor Performance
3. Problems Starting
4. Increased Emissions
5. Poor Fuel Economy
6. Shifting Problems
PCM Function
PCM Location
PCM Replacement Cost
PCM Testing
Frequently Asked Questions
Can a car run without a PCM?
How long does it take to fix a PCM?
How can I test my PCM?
What is the difference between an ECM and a PCM?
Conclusion: Bad PCM Symptoms

The most common symptoms of a bad PCM are poor engine performance and a check engine light on your dashboard. You may also notice problems with the transmission, like shifting issues. Poor fuel economy and increased emissions are also quite common.

While it’s not common for a PCM to break, it does happen from time to time. Before you jump straight to the PCM, though, rule out any other potential causes.

Here is a more detailed list of the signs of a bad or failing powertrain control module to look for:

The first sign that your PCM is having issues is likely going to be a check engine light. The light could be for anything related to the powertrain. Just keep in mind that the problem is more likely with the sensor, wiring, or just about anything else.

If your vehicle has a check engine light, rule out every other possible cause before jumping to the PCM. Check the trouble codes with an OBD2 scanner

Your PCM controls performance, so it makes sense that if it’s not responding correctly, that performance will suffer. The more screwed up your PCM, the more likely you’ll have multiple issues leading to poor performance.

However, if just a single part of your PCM isn’t working correctly, you may only have poor performance under certain conditions, like idling or accelerating.

If your PCM problems get bad enough, you might not be able to get your vehicle started. At the very least, it might be hard to start, especially in colder conditions.

If your vehicle is having problems starting and it’s related to the PCM, it’s a pretty serious problem that you need to have looked at before you total your engine.

Related: 5 Causes of a Car Engine That Cranks But Won’t Start

When everything is working correctly, your PCM minimizes your vehicle’s emissions by optimizing performance. When it’s not working the way it should, performance suffers, and you’ll likely have an increase in emissions. However, unless you’re taking your vehicle for an emission test, you probably won’t notice anything different.

If everything isn’t working correctly, it’s not surprising that your fuel economy will suffer as a result. For instance, you’ll need to accelerate more if your turbo isn’t generating enough boost because the PCM isn’t telling it to.

There are tons of examples like this, but with a faulty PCM, you’ll likely be wasting fuel.

If your vehicle is having problems shifting into different gears, then the PCM might be the problem. Your PCM controls everything that both your engine and your transmission does. So, if you’re having any issues with your powertrain, you might be able to trace it back to the PCM.

If your vehicle is having problems shifting, it’s a severe condition that you need to have addressed immediately. Otherwise, your vehicle is going to handle erratically, which can quickly lead to an accident.

The PCM is the brain of the power delivery unit in your engine. It controls various features, including ignition timing, fuel delivery, emissions, turbo boost pressure, idle speed, throttle control, and so much more.

The PCM controls all of these functions through a variety of sensors that communicates with it. It starts by sending a control out to an actuator and then measures the actual results through a sensor.

The PCM is programmed to tell each actuator what to do when specific commands are met – like when hit the throttle – and then it’s programmed to know what the acceptable readings are in response.

When something isn’t working correctly, it shoots a warning to the driver through a check engine light. No, it’s not an easy component to understand, and unless you have the proprietary software, it’s not a component you’re going to fix either.

There are a few different locations that the manufacturer can place your vehicle’s PCM, but the most common location is in the engine bay. The PCM doesn’t look like anything special, just a metal box with some wires coming out of it.

If your vehicle’s PCM isn’t in the engine bay, it might be inside the passenger compartment. While this location isn’t all that common if it is there, it is typically underneath the passenger side dashboard – behind all the plastic coverings.

In the ultra-rare instance that your PCM isn’t in either of those locations, it might be in your vehicle’s trunk. This isn’t as common since all of the wires from the engine will have to run to the vehicle’s rear to communicate with the PCM.

The PCM is a computer, and computers aren’t cheap to replace. That’s why the average PCM replacement cost is anywhere between $800 and $1,500, depending on the car model and labor costs.

Even worse, this is almost all in the cost of the PCM itself. Labor typically only runs between $75 and $100. But if you think you can save yourself $100 and replace it yourself, think again.

That’s because you need to program the PCM to your specific vehicle, and unless you have the proprietary software to do it, you’ll need to take it to the dealership.

The good news is that the dealership will see if they can’t reprogram the PCM before replacing it. If you’re lucky, they’ll find an update and reprogram it for you, which generally only costs between $75 and $150.

Can a car run without a PCM?

No, a car can’t run without a PCM. The PCM (Powertrain Control Module) is responsible for monitoring and controlling all the engine’s and transmission operating parameters, including fuel delivery, ignition timing, and emissions controls. Without a PCM, your car won’t start.

How long does it take to fix a PCM?

Fixing a PCM isn’t something that most people can do. It really depends on the issue and how comfortable you are with computers. If it’s a simple software problem, it could take less than an hour. However, if it’s a hardware issue, it could take several hours or even require replacing the entire PCM.

How can I test my PCM?

Testing a PCM is very difficult to do unless you have a lot of experience with these kinds of things. What you can do is test if the PCM is getting voltage and ground with a multimeter, but other than that it’s better to leave it to the pros if you don’t know how to test it.

What is the difference between an ECM and a PCM?

The main symptoms of a bad PCM include: