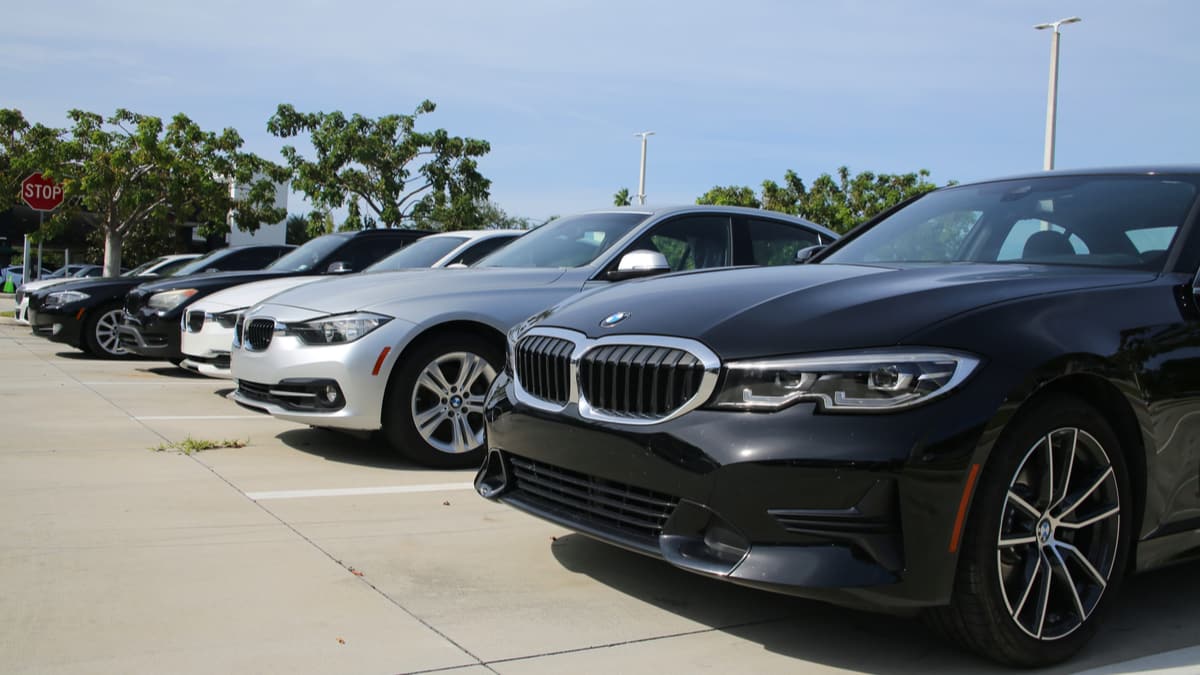 With such a storied history, the BMW lineup has been known by many nicknames. You may have heard it called a beamer or a bimmer, but what do these names mean? Why are BMWs called beamers or bimmers?

The terms Beamer, Bimmer and Beemer are used interchangeably to describe the BMW car and motorcycle lineup. However, each of these terms has a different meaning and pronunciation. While they are all years gone by, you want to be careful which one you choose to use.

There’s a lot of confusion between the three names and most people use them in the wrong sense. That’s why it’s vital to discuss the origin and purpose of each.

In this guide, we look at the story behind the nicknames. We also explain the differences between the various nicknames that BMW is known by.

Table Of Contents show
BMW Nickname Origins
1. Beemer
2. Beamer
3. Bimmer
What is the Chinese Nickname for BMW?
Other BMW Nicknames
History of BMW
Top 3 BMW Models of All Time
1. BMW Nazca C2
2. BMW Alpina B10 Biturbo
3. E30 BMW M3
BMW FAQs
What is the difference between Bimmer and Beemer?
What do the letters BMW stand for?
Is Beamer a BMW slang?
Are Mercedes called beamers?

When the BMW lineup of bikes was out and growing in popularity, there was another manufacturer from Great Britain known as Beezer. This company became one of the top competitors, known as BSA motorcycles.

To differentiate from the Beezer lineup, BMW adopted the nickname Beemer. This nickname was never intended for the BMW car models, but it has been used heavily.

BMW bike owners originally started using Beemer, but it slowly got moved over to the car lineup, even though it wasn’t supposed to be. Then, Beemer transformed into the spelling Beamer. This variation came about simply because people weren’t sure how to spell it originally.

However, if you talk to most people, they would agree that Beamer is the nickname for BMW cars, even though it was never intended to be. Instead, it was meant for the bike lineup and it was spelled Beemer. So, on two different fronts, this nickname is wrong.

Several decades later, in the 1970s, the term bimmer was first used. BMW cars were gaining more popularity in the United States and enthusiasts were referring to the cars as beamers, even though that name was reserved for the bikes.

The only group that seemed to get it right was the Boston Chapter BMW Club. From the beginning, they titled their group’s newsletter the “Bimmer.” Shortly after that, a new magazine was published that had nothing to do with the Boston Chapter and it was titled Bimmer as well. This nickname became the preferred option for BMW cars. Now, it is used for the entire car and SUV lineup and has even grown in popularity in Germany.

RELATED: BMW vs Mercedes: Which Brand Is Better in 2022?

What is the Chinese Nickname for BMW?

The Chinese have their own name for the BMW lineup. In the 1990s, China nicknamed the cars boa-ma, meaning precious horse. The Chinese regard horses as sacred animals that are valued and have a competitive advantage over others, so this term is a compliment to the company.

Because cars have taken over the place of horses as a primary means of transportation, it makes sense that the horse would be used in defining it. The BMW has also become a status symbol in China, along with many other countries, so it’s obvious that it would be termed precious.

While Bimmer, Beemer, Beamer and boa-ma are some of the most known nicknames for the manufacturer, the company is known by some other names throughout the world. Here are a few of the most popular that you might not know about.

There are probably many others that get used that we don’t even know about yet. The bottom line is that the BMW lineup is popular throughout the world, with each culture giving it its own name.

RELATED: BMW DSC Light – Meaning, Causes (Is It Safe To Drive With?)

In 1916, Bayerische Motoren Werke AG was created, otherwise known as BMW. The brand was initially created to manufacture aircraft piston engines. However, the company only waited a few years before diving into motorcycle production, with the BMW R 32 hitting streets in 1923.

In 1928, BMW’s first car was also released. The Austin Stevens 7 was BMW’s first automobile. However, not a lot occurred from then through the war.

During the war, BMW survived, but not by much. The company focused heavily on cooking hardware, pots and bicycles. However, the 1950s were a time of growth. In 1951, the BMW 501 luxury saloon was released, with the BMW Isetta arriving shortly after in 1955. The Isetta was part of the micro car segment, becoming extremely popular. It helped to propel BMW into the forefront of the market.

Yet, there was another financial crisis coming to the company. It almost happened that Daimler took over BMW, which would have put Mercedes-Benz and BMW under the same umbrella. To help save the company, Herbert and Harald Quandt made a significant investment in 1959. With this investment, several new models were released, including the lineup of compact sedans that hit the road in 1962.

It was in the 1970s that BMW started creating the various Series. For starters, the 3 Series was created as an entry-level compact sedan. Next came the 5 Series, which was considered a step up. After that, the company released the 6 Series, which remained primarily focused on extreme levels of luxury. Finally, the 7 Series was released to compete with the Mercedes-Benz S Class. Even today, people understand the various nomenclatures, knowing exactly what Series is desired for what purpose.

BMW went on to start other brands that fit under the company. The automaker bought MINI, Land Rover and Rolls Royce to offer customers something that wasn’t part of its lineup. The Rolls Royce provides something beyond the 7 Series, while the MINI created a market for the compact vehicle. Plus, Land Rover SUVs are unique in their own right. However, BMW only owned Land Rover until 2000, when it was sold to the Ford Motor Company.

Today, the BMW Group also owns BMW Motorrad. This is the dedicated motorcycle division of BMW. However, both the BMW lineup of cars and bikes continue to thrive in today’s market.

Top 3 BMW Models of All Time

The BMW Nazca C2 was designed by Giorgetto Giugiaro and it has been known as the most beautiful BMW ever. This sports car concept was created in 1992 with a 5.0L V12 engine to produce 380 horsepower. However, only three of these cars were ever created.

The limited-edition design makes it one of the most popular collectibles from the automaker today. Plus, it’s beautiful with its carbon fiber construction, glass top and gullwing doors.

If you are looking for a BMW model that overflows with power, there’s nothing quite as wonderful as the Alpina B10 Biturbo. Production started in 1989, with the revision of the 5 Series E34 executive car that’s blended with Alpina performance

The vehicle was continually upgraded with Alpina’s help, making it the fastest sedan in production back in 1989. There were only 507 of these vehicles created through 1994, making them another collector’s item.

The E30 BMW M3 was produced from 1987 until 1991, so it’s another limited-edition run. However, the historic properties of this BMW continue to gain attention.

This model earned the nickname “God’s Chariot” because of how it handled on the road. In fact, it became a favorite of sports car enthusiasts and racers alike. The biggest difference with this model is that 17,970 were produced, making it much easier to find.

What is the difference between Bimmer and Beemer?

What do the letters BMW stand for?

The letters BMW stand for Bayerische Motoren Werke, which is German for Bavarian Motor Works. BMW is a German luxury vehicle and motorcycle manufacturer founded in 1916. The company has its headquarters in Munich, and produces vehicles under the BMW, Mini, and Rolls-Royce marques.

Is Beamer a BMW slang?

Yes, “Beamer” is a slang term that is often used to refer to BMW vehicles or motorcycles. However, bimmer is the correct term to describe BMW cars, while beamer or beemer was for motorcycles, but these days they are all used interchangeably.

No, Mercedes aren’t called beamers. Beamers is a nickname for BMWs. Benz is a commonly shortened name used for Mercedes Benz cars. The two brands are often compared to each other because they’re both luxury German carmakers.