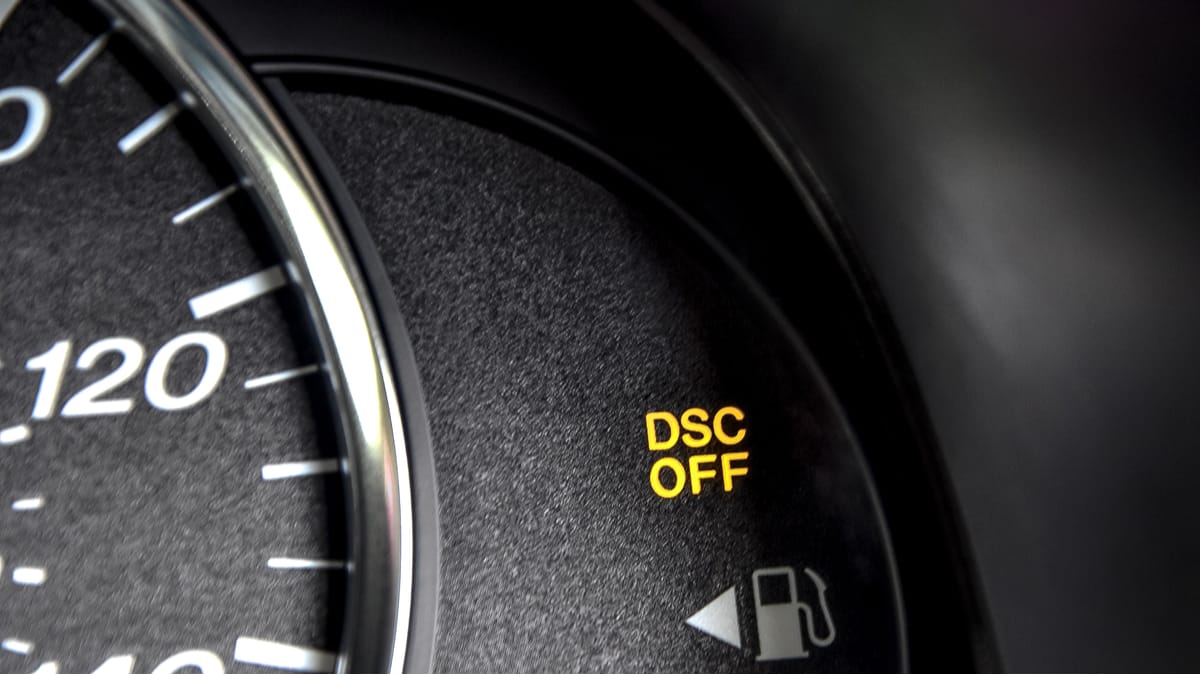 If you drive a BMW, chances are that you have a DSC system. But what does that mean, and what should you do if the DSC light turns on in the dash? Below we’ll break down everything you need to know about this great system and what you need to do if it starts acting up.

Furthermore, we’ll let you know if this is a problem you can ignore for a while or if it’s something you need to address right away. We’ll also dive into the most common reasons it starts acting up, including one that might be able to save you a trip to the repair shop!

What Does The DSC Malfunction Light Mean?

The Dynamic Stability Control (DSC) Light illuminates when there is an issue within the stability control system. It can also show up and start blinking while you are driving on a slippery surface.

While that’s a lot of potential meanings for the light, if you know how it functions, then it’s pretty easy to understand what it’s telling you when it turns on.

As we noted above, there are several different reasons that your DSC light might be on but understanding the way it functions makes everything a little more clear.

When you first turn on your vehicle, it goes through a system check. During this system check your vehicle checks every component in your vehicle to ensure it is functioning correctly. When you look at the dash, you’ll see all the lights come on and then turn off. This is completely normal, and as long as the DSC light turns off, you’re good to go.

From there, the DSC light will turn on and stay on if there is a problem in the system. If the DSC light stays on, that’s when you should consider taking your vehicle to a mechanic. But before you do check out the causes section below – we might be able to save you a little bit of money with a quick fix.

Finally, your DSC light will come on when the system is in use. Unlike when there’s a problem in the system, the light will flash on and off repeatedly when this is happening. Additionally, you’ll feel your vehicle applying the brakes to specific wheels to help you maintain control of your vehicle.

Once your vehicle regains stability, the light should stay off, and everything should work as expected. Unless the DSC light is coming on when it shouldn’t, this isn’t a problem and you’re good to go.

The most common causes of a BMW DSC light are that you’ve accidentally turned the system off or you have a faulty wheel speed sensor. But while those might be the most common problems, they aren’t the only things that could be causing your problem.

Below we’ve highlighted the four most common causes of a DSC light.

1. The DSC System Is Turned Off

Whether you know it or not, you can turn your DSC system off. All you need to do to turn the system off in a BMW is hold the DSC light for at least three seconds. This will disable the DSC system, which can be helpful if you’re trying to drift.

But once you’ve turned the system off the DSC light will appear in the dash. Before you take your vehicle to a mechanic, try holding the DSC light button for at least three seconds to see if you can turn it back on. If you’ve already tried this and it didn’t work, then you have an actual problem you need to address.

The most common underlying problem in a faulty DSC system is a defective wheel speed sensor. Your BMW uses these sensors to determine when one or more of the wheels is slipping. But when one of the sensors is giving errant readings or is completely offline, then the system can’t work like it’s supposed to, and you get a DSC light on the dashboard, often together with an ABS light.

Another critical component in your BMW’s DSC system is the steering angle sensor. This component is critical because as you turn, your vehicle’s outside wheels turn faster than the inside wheels.

This is completely normal, but if the steering angle sensor reports that you’re still heading straight while you’re actually turning, then the DSC system will think that wheels are slipping. If this happens, the DSC system can kick on when it shouldn’t.

It doesn’t matter if all the sensors are working the way they should if they can’t communicate with the ECM or aren’t getting power. That’s why it’s crucial to verify your connections before replacing sensors.

While it’s more common to have a faulty sensor than broken or corroded wires, it’s not unheard of. The most likely place you’ll run into these problems with the wiring is right at the wheel speed sensors where the wiring is exposed to the elements.

Is It Safe To Drive With a DSC Light?

Because if there is a possibility that the DSC system could kick on when it shouldn’t while you’re driving. While it’s rare, it can happen. But if you’ve manually turned off the DSC system or you know that’s it’s completely disabled, it’s safe to drive with a DSC light.

Still, you’re losing a safety feature, so it’s best to get it working the way it should as soon as possible.

While the DSC system can be a little frustrating when it starts to act up, it can save you from an accident when everything is working the way it should. So, while the little extra cost in sensors now can be frustrating, it’s well worth it in the end.