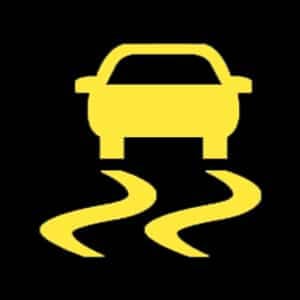 The ESC works together with the ABS to help the driver steer whenever they find themselves in skidding conditions.

In this instance, sensors are placed in each of the wheels and whenever the onboard computer notices that the car is out of control,  brakes are applied to either of the wheels.

What Does the ESC Light Mean?

The ESC light comes on when the car activates the electric stability control due to lack of steering control, normally due to a slippery surface. As the car tries to regain traction control, the light will remain on.

However, if the light remains on or keeps flickering then you could be experiencing problems with your ESC system. In some cars, there is a button to switch on/off traction control.

The ESC is in constant communication with the wheel sensors to determine the driver’s intended steering and direction. When skidding occurs, the car may oversteer or understeer. The ESC works by correcting the effects of skidding before it causes an accident. Most rally drivers will often disconnect the ESC as they desire to drift and it gives them more control of the car.

However, if you are driving on the highway, it is paramount that you keep the ESC on.

How Does ESC Work? 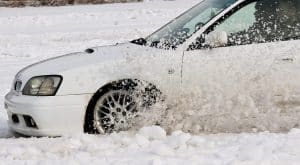 An ESC system includes ABS but not all cars with ABS have ESC. ESC monitors the steering angle and the wheel speed to check if the car is skidding. If the system notices that the driver is losing power, it will cut back on power and apply ABS; hence, enabling the driver to retain control of the vehicle.

SEE NEXT:  How to Change Brake Pads With an Electric Parking Brake

Many drivers assume that when the light is on, the car will do everything for you. But, the system only assists you when you are losing traction. You should make every effort to slow the car down when skidding on slippery roads. Most of the time, you should leave the light on for emergencies.

In this regard, most manufacturers have maintained that the ESC should not be a replacement for safe driving. This is because most drivers become overconfident when they know that their cars have ESC systems. If you perform a reckless maneuver, then expect the car to steer out of control. ESC minimizes accidents but they do not eliminate them.

The ESC was first introduced in the Toyota Crown in 1983 and was named the “Anti-Skid Control”. By 1987, BMW and Mercedes Benz had developed their own ESC systems. Many other car markers followed and by 2009 the European Union had made it mandatory for all cars to have ESC systems. The US NHTSA requires that all cars manufactured after 2012 should have the system.

Problems Associated with the ESC Light

The easiest way to diagnose ESC related problems is with an OBD2 scanner to read the trouble codes from the brake control module. However, there are some parts that get damaged more often when it comes to the ESC light. Here are a few:

The ESC communicates with wheel sensors attached to each wheel. When the sensors get covered with dirt, they are no longer able to detect loss of traction in any of the wheels. This will lead to your ABS and ESC systems malfunctioning.

A faulty steering angle sensor can often result in a constant ESC light lighting up on your dashboard.

Wheel sensors relay information about the car’s traction through a set of wires to the onboard computers. However, should any of these wires not be connected properly or the ESC fuse blown then the ESC light will fail to come on.

The traction control determines the amount of pressure to be applied on the brakes whenever the driver loses control. This is done through constant communication with the wheel sensors. If the traction control computer is faulty, then the ESC will not work.

How Effective Are ESC Systems?

The NHTSA has confirmed through numerous studies that ESC systems are effective at controlling road accidents. In 2004, a study carried out by the organization revealed that ESC reduced car crashes by up to 35%. The rates are even higher – at 67% – for SUVs. Another study conducted by the Insurance Institute for Highway Safety (IIHS) revealed that over 10,000 car fatalities could be avoided each year in the US if cars were equipped with ESC systems.

The main function of the ESC is to keep the car under control whenever you lose control while driving on slippery roads. The ESC works with the ABS to lock the wheels that are rotating at a higher speed than the rest. It also communicates with the onboard computer to reduce power to the car.

The NHTSA will require each car that comes out of manufacture to pass a test where the car is driven at speeds of up to 50mph/80kph. The car should not steer out of control if it is to pass the test. There are cases where it has been revealed that the ESC could have contributed to an accident.

This has been the case where the driver was overconfident regarding their skills because they had ESC in their cars. Faulty ESC systems can relay the wrong information to the driver.

The ESC is also referred to as the Electronic Stability Program (ESP) or Dynamic Stability Control (DSC) in some cars. When you are experiencing problems with your ESC, the main problem could be with the wheel sensors or ABS rings.

Sensors on each wheel are used to detect the angle of rotation of the wheels. The moment the sensors detect that one of the wheels is rotating at a faster rate than the rest, a signal is sent to the onboard computer. This activates the ABS and there is a reduction in power.

When the sensors get dirty or there is an electrical fault, then you will have a faulty ESC light. You should regularly clean your ABS sensors to ensure that they are in good working condition. Some cars have an ESC button that you can press when you want to disable traction control. This is not advised unless you want to use your car for racing. Ensure that your car’s battery is fully charged if you start experiencing ESC light problems. An OBD-II scanner can be used to diagnose the car’s computer error codes. You can then check the manufacturer manual for information about the error code.

Search
Related Posts
About Mechanicbase
Mechanicbase is a blog created for all car and automotive lovers. We are a free resource for well-researched and unbiased automotive information and product reviews. We are owned and operated by SellenMedia.
0shares