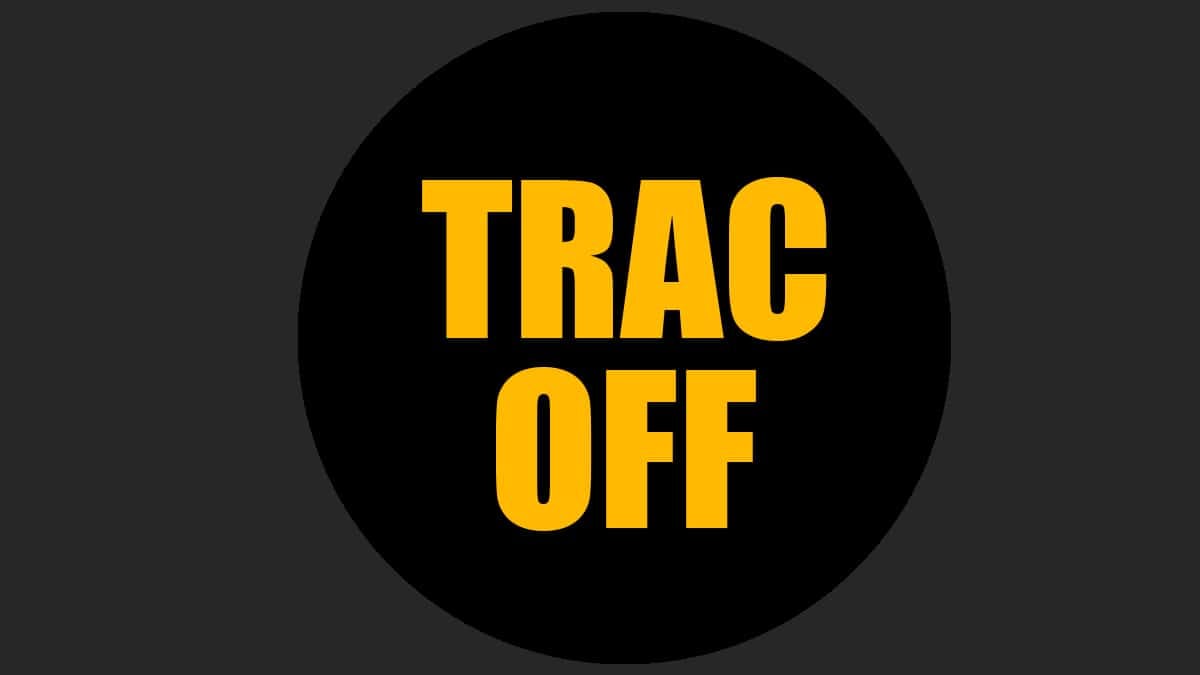 Your Toyota dashboard has a variety of warning lights that let you know when something is wrong. When the TRAC OFF light comes on, it can cause some alarm, but it doesn’t need to. In many cases, there’s nothing abnormal occurring.

In this article, we cover the meaning of the TRAC OFF light and show you what causes it. We also outline some fixes you might want to try and tell you when you should manually turn off the system.

Table Of Contents show
What Does The TRAC OFF Light Mean?
What Causes The Trac Off Light?
1. You Turned it Off
2. Poor Road Traction
3. Defective Wheel Sensor
4. Failed Steering Rack System
5. ABS Malfunction
6. Computer Malfunction
How to Fix the TRAC OFF Light?
1. Turn it On
2. Restart Vehicle
3. Read DTCs
4. Visit Mechanic
When Should TRAC Be Turned Off?
Frequently Asked Questions
Can I drive my car if the Trac Off light is on?
Why is my Trac Off and check engine light on in my Toyota?
How do I turn off the check engine light and TRAC off light?
How much does it cost to fix a Trac off light?
Final Words

What Does The TRAC OFF Light Mean?

If you have pushed the button for the traction control system, you may also see the VSC (vehicle stability control) light. On the other end, when there’s a malfunction, it’s common for the Check Engine Light or other MILs to come on the dashboard, further indicating what the problem might be.

The TRAC OFF light can look different depending on what model you drive. In some cases, you will see the letters “TC” on the dashboard. Otherwise, there could be an image of a vehicle with lines that are bending opposite of the tires.

What Causes The Trac Off Light?

The most common cause of a TRAC OFF light is that you pressed the TRAC OFF button in your Toyota vehicle by mistake. If you see the TRAC OFF light along with a check engine light or other warning lights, there may be a problem with the traction control system.

Here is some more detailed information on the causes of the TRAC OFF light.

1. You Turned it Off

The main reason that the TRAC OFF light comes on is due to you turning the system off by mistake. You can hit a button to turn the traction system on or off. When it’s off, the dashboard will indicate the condition so you know that it needs to be reactivated. Hitting the switch is all that’s needed to turn it back on.

Many times, when you physically turn off the traction control system, the vehicle stability control will also deactivate. You could also see the VSC light on the dashboard or a picture of a vehicle sliding on the road with the words OFF listed. This above is usually the only reason for a TRAC OFF light.

If you see the Trac Off light along with a check engine light on your dashboard, it could be a sign that there is a problem with your traction control or engine control system. This can be caused by any of the following issues.

If you see a blinking traction control light on your dashboard, it could mean that you are driving on a slippery surface and that the car is skidding. If this is the case, the light will only come on temporarily until the road gets better.

The most common cause of this condition is because of snow or ice. However, even a good amount of rain can lead to reduced traction, which leads to a temporary malfunction.

Your car is equipped with wheel speed sensors that feed data to the engine control unit and the traction control system. These sensors are responsible for measuring each wheel’s rotational speed.

If there’s a failure with the sensor, the system will receive data that appears inaccurate. For safety reasons, the traction control system will shut off so as not to malfunction.

Hydraulic fluid gets pumped into the steering rack, so you can spin the wheels with ease while driving. To maintain traction, controlled steering is imperative. Modern steering systems do also use many different sensors for the system to function properly.

The anti-lock brake system also plays a big part in your on-road handling. If there’s a malfunction with the ABS, you could see the traction system shut off as well.

The problem could be related to the ABS controller. However, the wheel speed sensors are also part of the ABS system, which we discussed earlier.

READ MORE: ABS Light – Meaning, Causes, Fixes (& Is it safe to drive with?)

Modern vehicles have been built with many different computers, each running a different set of operations. When a computer malfunction occurs, the traction control system could act up and turn off automatically.

When a computer malfunctions, it doesn’t normally just affect one system. For this reason, this is one of the most unlikely options on the list, but also most noticeable because there should be several other symptoms happening at the same time.

How to Fix the TRAC OFF Light?

To fix the TRAC OFF light, it is enough to just press the TRAC OFF button again to activate the system in most cases. It may also help to restart the vehicle by cycling the ignition. If these steps do not work, you will need to read the trouble codes with a scanner.

Here is some more detailed information on how to fix the Trac Off warning light:

Usually, the TRAC OFF button is found to the left of your steering wheel in most Toyota models. Push the button again and see if that resolves your problem. This would be the easiest solution.

A simple reboot can fix a lot of problems. Just like you would with a computer that’s acting up, you can turn off the vehicle and restart the engine once again.

If the traction light remains off, the problem has resolved itself and you have nothing to worry about. If it hasn’t, you want to move on to the next steps to figure out what’s going on.

If the other suggestions haven’t worked or there are other lights on the dashboard, you should read the diagnostic trouble codes with your scanner. This step is imperative if the Check Engine Light comes on with the TRAC OFF light.

With the code scanner, you should gain a better idea of the fault. We recommend repairing anything that shows up before worrying too much about the TRAC OFF light. It’s possible that the fix will resolve the traction control system problem.

If you are unsure what the trouble codes mean or you can’t find the problem, go ahead and reach out to a professional. It’s possible that there’s a more advanced issue occurring that you won’t know how to repair.

While you will have to pay more to have a professional handle the repair than if you did it yourself, you know the job will get done. You can choose an independent mechanic to handle this diagnosis or pay a little more to visit your local dealership.

When Should TRAC Be Turned Off?

If you are driving off-road or driving on a very muddy or snowy road, you may want to turn off the traction control system. With the system on, power from the engine to the wheels is reduced, which only adds to the problem.

By turning off the TRAC system, you can rock the car, truck or SUV free from where it sits. Push the button in and look for the sign on the dashboard. Once you get out of this situation, you can push the button again to re-enable it.

The reason that there’s a button to turn off the TRAC system is due to the times when it becomes necessary to disable. Under normal driving conditions, it’s best to leave the system engaged.

Can I drive my car if the Trac Off light is on?

Why is my Trac Off and check engine light on in my Toyota?

If you see a TRAC OFF light along with a check engine light and sometimes also a VSC light in your Toyota, it means there is a problem with your traction control system. To find out what is wrong with the system, you must read the error codes with a scanner.

How do I turn off the check engine light and TRAC off light?

To turn off the check engine light along with a TRAC OFF light, you need to fix the problem that caused it and then reset the codes with a code scanner. You can also try pressing the Trac off button and recycling the ignition, but that doesn’t help in most cases.

How much does it cost to fix a Trac off light?

It may seem like a big problem when the TRAC OFF light shows up on your dashboard, but in most cases it is actually a very simple solution if you see it alone. If you see this light along with other warning lights such as the check engine light or the VSC light, it may be due to some more serious problem.

I hope you enjoyed this article and now have all the knowledge you need to fix the TRAC OFF light on your dashboard.