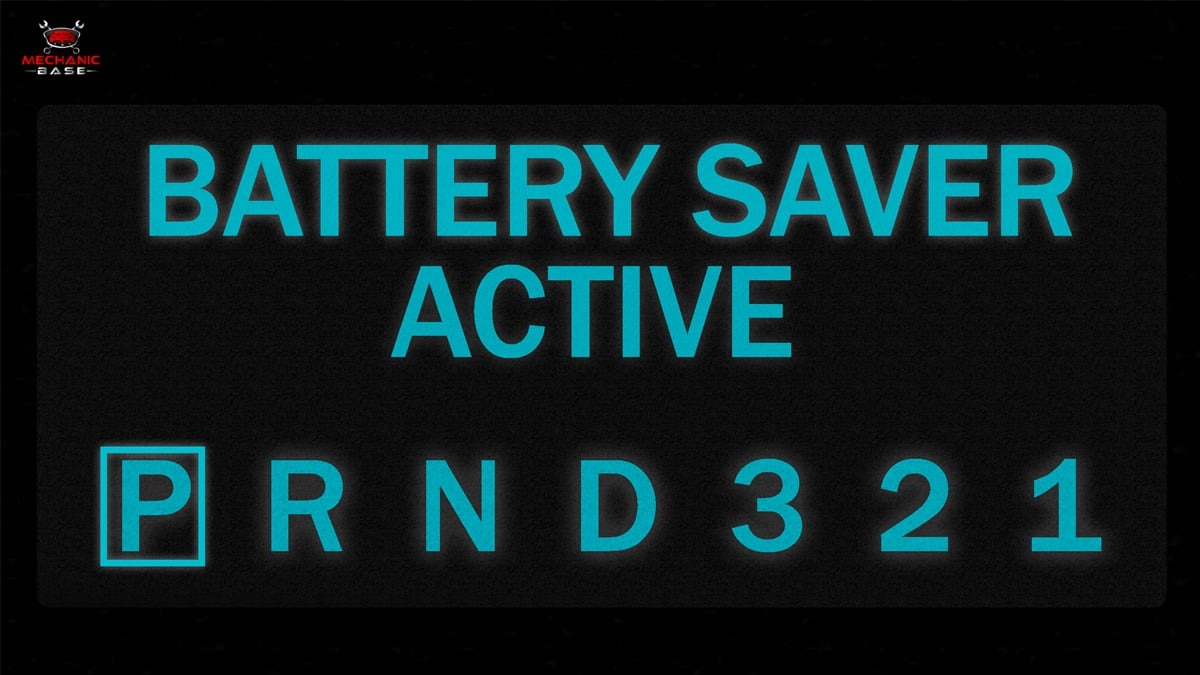 If you drive a GM or Chevy vehicle, you might be alarmed to see the Battery Saver Active message show up on the dashboard or infotainment screen. This warning is meant to alarm you because it indicates that something is wrong.

In this guide, we look at all of the possible causes for this warning light and discuss its meaning. We also help you find the solution, so the problem can be resolved. At the end of our article, we talk about whether you should drive once this message appears.

What Does The Battery Saver Active Message Mean?

The Battery Saver Active warning message shows that the battery will no longer hold a charge or is running down too low. To conserve the power, the computer will automatically shut down some of the electrical components to preserve the life of the battery. However, you could still end up stranded if the battery drains completely.

The battery saver system will maximize the current from the alternator and battery, whatever is being provided. With the help of the PCM (powertrain control module) and the battery sensor, the system can adequately determine how much charge is remaining.

The rationing of power helps to keep the battery running longer, so you have time to pull over in a safe location or possibly get home. With this warning, you may not face an immediate shutdown.

The Battery Saver Active warning message is in most cases caused by a bad alternator, that’s not able to charge the car battery properly. It is also common that the battery itself is bad and won’t hold the power that the alternator provides.

Here is a more detailed list of the causes of a Battery Saver Active warning message:

If the alternator is failing, it can no longer adequately charge the battery while you are driving. For this reason, the battery might start to die with no chance of getting it back up to optimal power.

Another common reason to see this warning light is due to a dead car battery, especially if you saw this message when the engine was not running. As the battery becomes weaker, it can no longer hold a charge. If it is holding less than 12.4 volts, the sensor will report the problem to the computer, causing the warning to illuminate.

To conserve power, the system shuts down any electrical equipment that is no longer needed. You may not have a lot of time to pull the car over before the battery fails completely.

To ensure that the battery works as it should and the alternator can supply adequate power, the connections must be solid. The charging system is made up of several connectors and cables, all of which need to be secure.

If the battery cables are loose or the connections come off, electrical flow is going to be interrupted. Corrosion can cause the same situation. Thankfully, these problems can be easy to repair.

READ MORE: Battery Terminal Corrosion Causes (& How to Prevent It?)

Some car models are equipped with a sensor that measures the flow and voltage to the battery. If the sensor discovers that the flow has dropped below 12.4 volts, it will tell the computer to turn on the light and ration power.

How To Fix The Battery Saver Active Message?

To fix the active battery saver message, you need to make sure that the battery connections are good and there is no corrosion. Then you need to measure with a multimeter on the battery when the engine is running to determine if the alternator is functioning properly.

Here are some more detailed steps on how to fix battery saver active message:

Before you go any further, you want to check the battery connections to ensure they are secure. You may only need to tighten up some of the bolts to get the charging system back where it needs to be.

There’s also the chance that the battery terminals or connections are corroded. If this is the case, a simple solution of baking soda and water can be used to clean away the corrosion and re-establish the connection.

If the alternator is failing, it won’t be able to charge the battery. You will notice the same symptoms of a dead battery, even though the issue comes from the alternator. You can take the alternator to a local auto parts store for testing or do it yourself. Here are some steps to follow.

You can also test the system with a load. Turn on the radio, air conditioning, headlights and taillights. Even with all of these components on, the voltage shouldn’t drop lower than 13V.

You may spend between $75 and $450 to get a new alternator. If you can’t put it on yourself, you also need to pay for the labor charges.

MORE DETAILS: How to Test a Car Alternator (5 Steps)

If the battery is dead, you will need to replace it. Most car batteries last around four to six years, so if it’s been a while since you got a new one, now might be the right time. You can test the battery yourself or take it to a local auto parts store. Here are the steps to check your car battery.

Anything below that indicates that the battery needs to be charged. If you hook a charger up to the battery, but it doesn’t improve, it’s time to swap out the battery.

You can spend anywhere from $40 to $300 to get a new car battery, depending on what kind of car you drive. Many auto parts stores will install the battery for free if you purchase it at that location.

This sensor is located on the negative battery terminal. Check the connections to the sensor. You may also choose to sandpaper the battery terminal slightly before you bolt it to the frame of the vehicle.

Thankfully, the sensors aren’t expensive to replace and the fix can easily be done at home. Your main priority is to ensure that the connection isn’t loose.

Can I Drive with the Battery Saver Active Message On?

No, it’s not recommended to ignore the Battery Saver Active Message and keep driving. It’s best to take heed when the warning appears. You want to take immediate action to ensure you won’t be stranded in a dangerous location. The car is giving you a warning that the engine might stall and not restart. If you are close to home or your local auto repair shop, you may try to get the car to these safe locations before it dies.

Additionally, along the way, you will be without some electrical accessories and equipment. Whether the system turns these features off or not, you could further save some battery by turning off the air conditioning, the radio and other components that aren’t necessary.

Why Would A Car Go Into Battery Saver Mode?

The main reason a car goes into battery saver mode is that the alternator is not charging the car battery properly. It could also be due to a bad connection or a bad car battery that won’t hold a charge.

Does Battery Saver Active Mean I Need a New Battery?

The battery saver active message could mean you need a new car battery, but not always. If you see this message when the car engine is running, it is more likely that there is a problem with the charging system such as the alternator.

What Does Battery Saver Active Mean on a Chevy?

The active battery saver message on your Chevy or GM means that the voltage is low and that the alternator is not charging properly, or the battery is not holding the charge. It could also be due to a bad connection.

The Battery Saver Active message means that the battery isn’t holding a charge, so electrical components are shutting down to preserve power.

Some common causes for the battery saver active warning message include:

You can prevent many error codes by making sure your car battery is in good condition, and one of the methods to do this is by using a car battery maintainer. Another method is to replace the battery every 4 to 6 years, even if it’s not bad right now. This will prevent you from running into problems when you don’t want them.