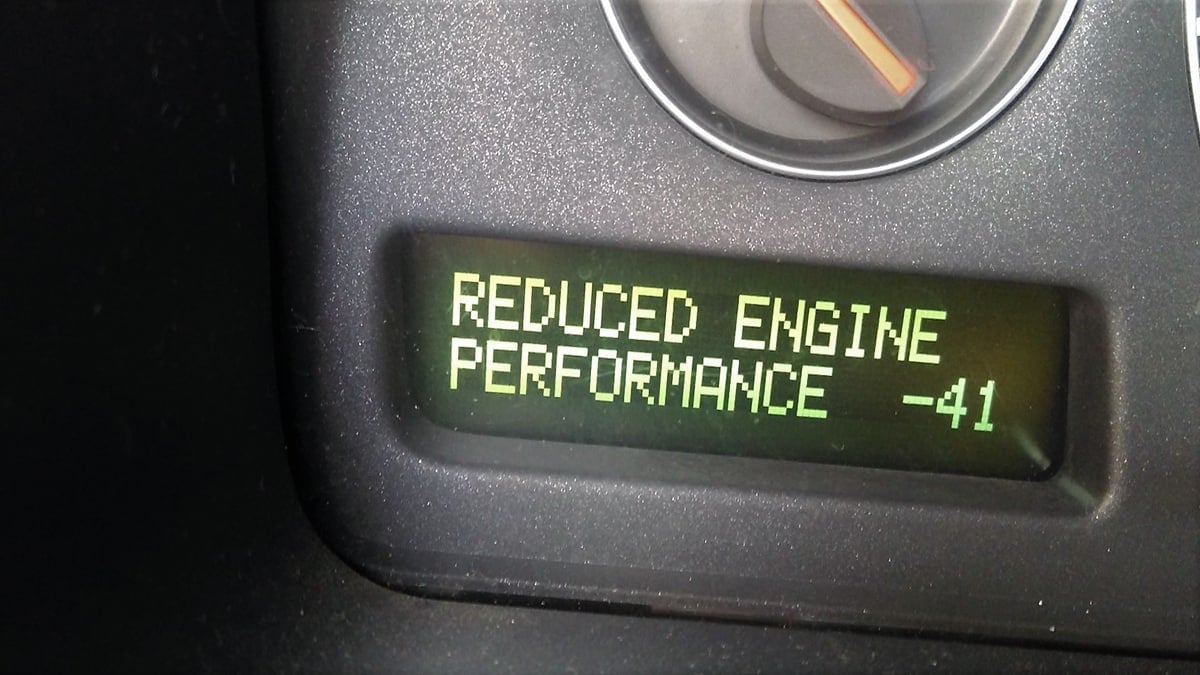 When your vehicle is running as it should, every day feels sunny and bright. However, the second something goes wrong, the world feels like it could fall apart. Nothing is more disheartening than seeing the Reduced Engine Power Warning alert on the dashboard or feeling the car’s performance fall off the map.

To help you deal with this confusing situation, we discuss the meaning behind the reduced engine power warning. We also look at the causes of this engine warning and show you how much it might be to repair it.

What Does The Reduced Engine Power Warning Mean?

When the Engine Power Reduced warning appears, it means that the performance of your vehicle is limited. The PCM detects a system failure and alerts the message to illuminate. In conjunction with the warning message, the engine might not act normally.

The reduced power can prevent the vehicle from shifting and can stop you from accelerating. In extreme cases, the PCM will restrict fuel to the engine, leaving you with a car that won’t run.

Some people refer to this system as the fail-safe mode. However, it’s also known as the limp mode because the warning gives you time to drive home without causing further damage to the engine or transmission. This warning message is very common in Chevy vehicles instead of the normal limp home mode.

The reduced engine power warning is often caused by bad engine sensors like a bad oxygen sensor, MAF sensor, or a bad throttle body. It can also be caused by a loose connection to any of these sensors. A clogged catalytic converter is also often to blame.

However, the reduced engine power warning can be caused by so many different reasons, and therefore you should never just replace parts you think could be faulty.

The easiest and most secure way to determine what is causing the Reduced Engine Power Warning message is by checking the trouble codes with an OBD2 scanner. When the message shows, there is almost always a trouble code stored in the system. This can save you a lot of money instead of replacing good parts.

Here are some other ideas of what can cause the reduced engine power warning to come on:

Every major component in your vehicle is connected with wires. If there is a short in the electrical system or one of the wires is damaged, the engine could go into a fail-safe mode. This problem can also exist if you have a loose clamp or a ground wire isn’t properly secured.

While a loose connection is simple to repair in most cases, it isn’t always easy to find. You would have to perform a full inspection of the systems to find the defect.

Oxygen sensors are needed to measure how much O2 is leaving the system by way of the exhaust. If there is too much or too little oxygen coming out, the ECU is going to adjust the air-fuel ratio to balance performance.

However, a defective sensor can send faulty information back to the computer, causing adjustments to be made that shouldn’t. This creates an imbalance in the air-fuel mixture, which not only leads to poor performance and engine issues but can also trigger the Reduced Engine Power Warning.

The throttle body contains several parts that could go bad and lead to these warnings. First, the butterfly valve is responsible for letting air into the engine. When this valve breaks, the proper amount of air cannot be achieved.

Carbon can also build up around this valve, leading to issues with the operation. When the engine can’t get enough air, it’s going to misfire and sputter while causing warnings on the dashboard.

Not far from the butterfly valve is the throttle position sensor that must also work properly to allow free movement of the air. This sensor reads the position of the gas pedal, telling the computer to open the butterfly valve. However, if the sensor is faulty, the valve cannot get the appropriate data and air will be constricted.

The Engine Control Unit is the brain of the entire operation. All of the sensors communicate what is going on with the ECU so proper adjustments can be made. If the air-fuel mixture isn’t right, it’s the ECU that alters what’s happening for better performance.

However, when the ECU starts to fail, any number of issues can occur. You might start to notice poor performance while the engine compensates for problems that may not even be happening.

You will find the mass airflow sensor between the intake manifold and the engine air filter. Its job is to measure the pressure and density of the air that enters the engine.

Once these measurements are performed, the information is sent to the ECU so the proper fuel ratio can be applied. When the MAF sensor fails, the wrong data is sent, which creates problems with the ratios and causes warning lights to illuminate.

Once this happens, the vehicle will not only fail an emissions test, but you will experience some engine performance issues. It won’t always illuminate the Reduced Engine Power Warning, but you can expect the Check Engine Light to come on at a bare minimum.

Transmission issues are never fun to deal with and can lead to a lot of headaches. If the transmission is slipping or the fluid has become low, you can expect to see some error codes.

While people don’t think a reduction in engine power is linked to the transmissions, these two systems are intertwined. If none of the other culprits are to blame, it’s time to take a look at the transmission.

The cost to repair a Reduced Engine Power Warning ranges widely from $0 to $2,500. The only way to know the exact cost would be to determine what’s causing it.

Using an engine code scanner should help you narrow down where the fault is. The OBDII scanner will read any fault codes, showing you what systems might be to blame.

Ideally, you would notice a loose connection, which wouldn’t cost you anything to fix if you can re-establish the link. However, replacing the catalytic converter or swapping out the ECU could be a costly fix that might lead to your vehicle heading to the junkyard.

You should never drive with the Reduced Engine Power Warning light on. If the Limp Mode has been activated, you should immediately drive the vehicle to a safe location and turn it off. Turn on your hazard lights to let other drivers know you are having trouble.

If you have more than a few miles to drive, it’s recommended that you have the vehicle towed instead. You don’t want to end up stranded on the side of the road or cause an accident because of the lack of power.

How do you fix the engine power reduced warning message?

Can you drive with reduced engine power?

It’s not recommended to drive with the reduced engine power warning message, as you will not know the severity of the problem until you properly diagnose it. It could be a simple fix that is causing this message, but it could also be something serious that could damage your engine even more if you continue to drive without resolving it.

The reduced engine power light can be both serious and non-serious depending on what is causing it. It could be something as simple as low battery capacity, but it could also be an internal engine problem that gets worse and more expensive if you ignore the problem.

Yes, low oil can cause a reduced engine power warning message. Low oil can lead to low oil pressure which can negatively affect the engine in many possible ways. In the worst case, it can also lead to serious engine damage if you do not fix the problem as soon as possible.

Can a reduced engine power be a battery problem?

Yes, the reduced engine power message can be caused by a bad car battery. Modern cars are very sensitive to the correct battery power, and if it is too low, it can lead to many different electrical problems with your car. However, don’t just replace the battery without diagnosing it first because many problems can cause this warning message.

The reduced engine power message means that there is a problem with your engine or transmission and that there is a trouble code stored in the engine control module. There are many things that can cause this warning message.

Therefore, it is very important to read the trouble codes with a compatible diagnostic scanner before replacing any parts that try to solve the problem. This message means that your engine entered a safe mode to prevent further engine damage, so it is never wise to ignore it.