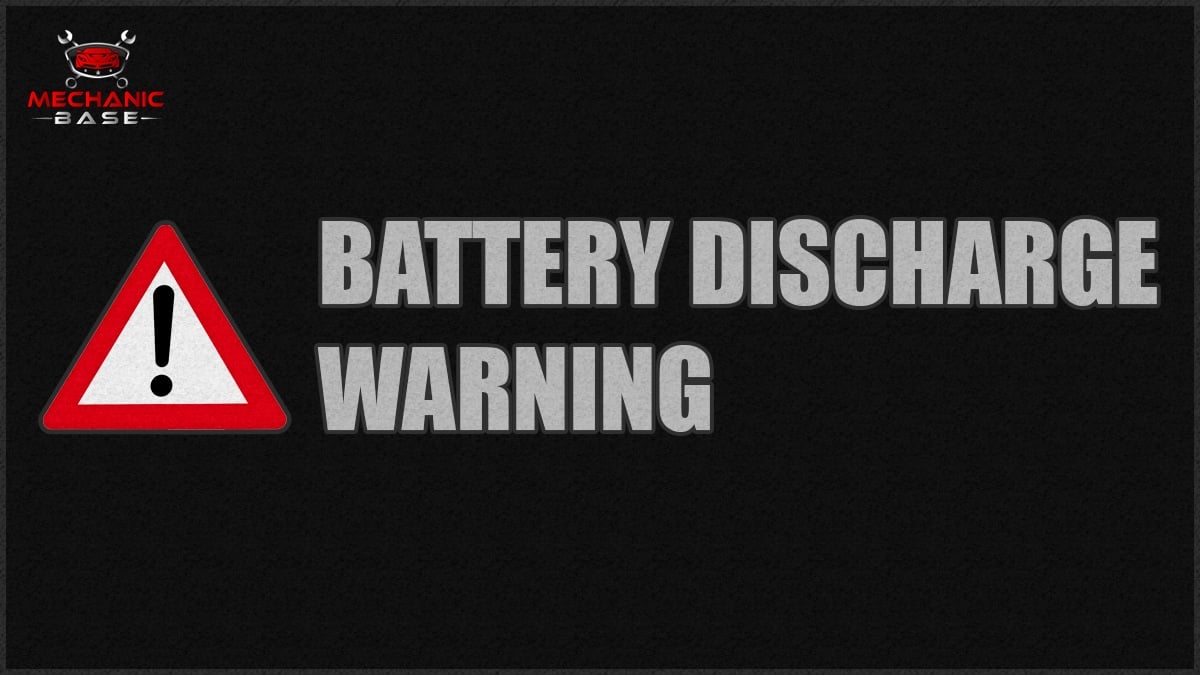 Let’s say you are sitting in your car waiting for someone and you feel like listening to the radio. You might run the stereo system without the engine on, but you could also see the Battery Discharge Warning in Kia models. This alert might cause some panic, but there’s normally a reasonable explanation for it.

In this guide, we look at the Kia Battery Discharge Warning light. We evaluate the different reasons for it and show you how to fix it. At the end of our article, we are also going to answer your Kia battery questions.

Modern Kia and Hyundai vehicles are equipped with a battery feature that ensures the power isn’t discharged faster than it is replenished. If you are using the battery to run accessories without starting the engine, the battery discharge warning light will eventually come on to let you know that the battery needs to be recharged.

Additionally, it can come on if there’s a problem with the battery charge while the engine is running. This problem stems back to some sort of mechanical failure and will likely be more complicated to repair.

Causes of Battery Discharge Warning With Engine Off

The most common cause of a Battery Discharge warning message in your Kia when the engine is off is because you are using accessories such as the car stereo, charging port, or have the ignition on with the engine off. This will cause the battery to drain, and you may have trouble starting the vehicle later.

You can turn on the accessories by rotating the key in the ignition to the appropriate spot. With the key in place, you can play your radio without starting the engine. This is a great way to save fuel, but will also drain the battery.

All of these electronic devices are powered by a battery. If you have a high-powered stereo system with performance speakers and an amp, it’s going to go through power much faster than a factory setup.

Today’s vehicles come with a variety of charging ports, some of which can remain powered on when the engine is off. If you keep your mobile phone plugged in when you aren’t in the vehicle, you are taking power from the battery that can’t be replaced.

When the battery becomes drained, the warning light will come on. For this reason, it’s best to unplug everything you aren’t using before you leave your car.

Have you ever left your headlights on when you walked away from your car? It’s a common mistake, especially when the headlights are on during the day.

Because the headlights run off of the battery during this time, you may come back to a dead battery when you are ready to go somewhere. However, before that, the warning light would come on. You just might not be in the car to see it.

It’s not normally a good practice to run your heat or air conditioning without the engine on. Not only will it cause a significant drain on the battery, but the air won’t be nearly as hot or cold as it could be with the motor running.

If you choose to run the system with the engine off, you are going to drain the battery over time. It would be better if you idled the engine during these times.

When the engine is off, the battery isn’t being recharged by the alternator. There should be nothing depleting the battery during this time, so it doesn’t need to be recharged in most circumstances.

However, if one of the battery connections is loose, it could cause drainage. Because the car isn’t running, this drainage can’t be compensated for and the battery might die.

If your battery has reached its end of life, it might be draining on its own. The electrodes, cells and plates inside the battery have reached their limit.

For this reason, it’s not going to hold a charge effectively. While it is parked, it could drain overnight, leaving you with a dead battery.

RELATED: 6 Bad Car Battery Symptoms (& How to Test it)

When there’s a parasitic drain in the car, something is using power when it shouldn’t. It could be caused by any electrical malfunction, from the heated seats to the windshield wiper motor.

When you park for the night, this malfunction continues to draw power from the battery, with no way to replace it. Depending on how severe it is, you could have a dead battery in just a few hours.

Most batteries are designed to stand up against a variety of weather conditions. However, if the battery is old and ready to be replaced, any extreme weather can wipe it out.

It doesn’t matter if you are facing cold winter temperatures or scorching hot summer weather, both are hard on the battery. For this reason, it’s best to test your battery before the season changes and to park in a garage for more protection.

If you see a Battery Discharge Warning in your Kia while driving, it could mean there is an issue with the charging system, such as the alternator, a dead car battery, or a loose connection. It can also be caused by a slipping or loose alternator belt.

The battery is linked to the electronics through various connections. If one of these connections is bad, the battery may not be able to be charged anymore.

A poor ground connection can cause the same problems. In fact, it can also cause a battery drain that adds to the problem.

The automotive battery is only going to last three to five years, even with great care. If the battery becomes old and can no longer hold a charge, you might see this warning light.

However, if the alternator is working as it should, it’s possible that the car will keep running once the engine is going. Since this isn’t guaranteed, it’s best to stop and get a new battery put in right away.

The car’s serpentine belt runs several components at once. In fact, it’s responsible for keeping the alternator working.

If the serpentine belt fails or becomes damaged, it can no longer turn the alternator. Therefore, the battery would stop charging and the warning light would illuminate. Of course, there would also be bigger problems if the belt broke.

How to Fix Battery Discharge Warning in Kia

To fix the Battery Discharge Warning light in your Kia, it will in most cases be enough to start the engine or charge the battery. If the warning light is on with the engine running, you need to inspect the alternator and charging system.

The easiest way to resolve your problem is to start the car. If you have been enjoying electronic equipment without the car on, simply cranking the engine on can resolve the issue.

Once the alternator starts running, the battery should begin charging. If it doesn’t, you have bigger problems to deal with.

If you have left the vehicle system ON too long without running the engine, the 12-volt battery might become discharged. To resolve the problem, you need to reset the battery switch, which is available in newer models.

Press the 12V Battery Reset button. Once that’s done, you can start the vehicle by pushing the brake and the Engine Start/Stop button.

You can start the engine and get the battery charging. However, if you weren’t planning to drive, you need to find another way to charge it.

With a battery maintainer or trickle charger, you can hook up the battery and recharge it. If it doesn’t seem to take a charge, check the connections and electrolyte level to ensure that it’s in good working condition.

If the battery can’t hold a charge, you want to test it. If you don’t have the equipment to do this at home, you can visit a local auto parts store for a free check.

Once the battery is dead, it’s time to replace it. Otherwise, you are going to find yourself stranded in an inconvenient location.

If the battery isn’t the issue, you need to find the problem and repair it. It could be a faulty alternator or some parasitic drain that must be dealt with.

If you are experienced in these repairs, go ahead and do them at home. Otherwise, you want to reach out to a professional for more help.

How Do You Fix a Battery Discharge on a Kia?

If the engine isn’t running, you can start the motor and the light should go away. Otherwise, there could be a problem, such as a dead battery, faulty alternator or bad connection, that needs to be repaired before the warning will go away.

What Does it Mean When it Says Battery Discharging?

When the battery is draining or discharging, it is losing voltage. The energy being used isn’t being replenished as it should be. There could be a problem with the battery or the charging system itself, but if it’s not corrected in time, the battery will die.

How Do I Know if My Kia Needs a New Battery?

There are usually warning signs showing that the battery is dying. The Battery Discharge Warning is the first symptom, but you might also notice that the headlights are dim or the electronics aren’t working as they should. It could also become difficult to start the car engine.

Does Fully Discharging a Car Battery Damage It?

Once a car battery drops to 10.5 volts, it is considered fully discharged. Below that can lead to battery sulfation and permanent damage to the inner workings. When sulfation occurs, lead sulfate crystals form on the lead plates inside the battery, so you may need to get a new one.

With the engine off, the Battery Discharge Warning light tells you that you are draining the power and it can’t be recharged. While driving, it is saying that you are using more battery than you are replenishing. Either way, action needs to be taken before the battery dies completely.

There’s no reason to panic when the Battery Discharge Warning comes on your Kia or Hyundai dashboard or infotainment system. It’s just telling you that the battery needs to be charged before it dies. If you take swift action, you can avert a crisis.