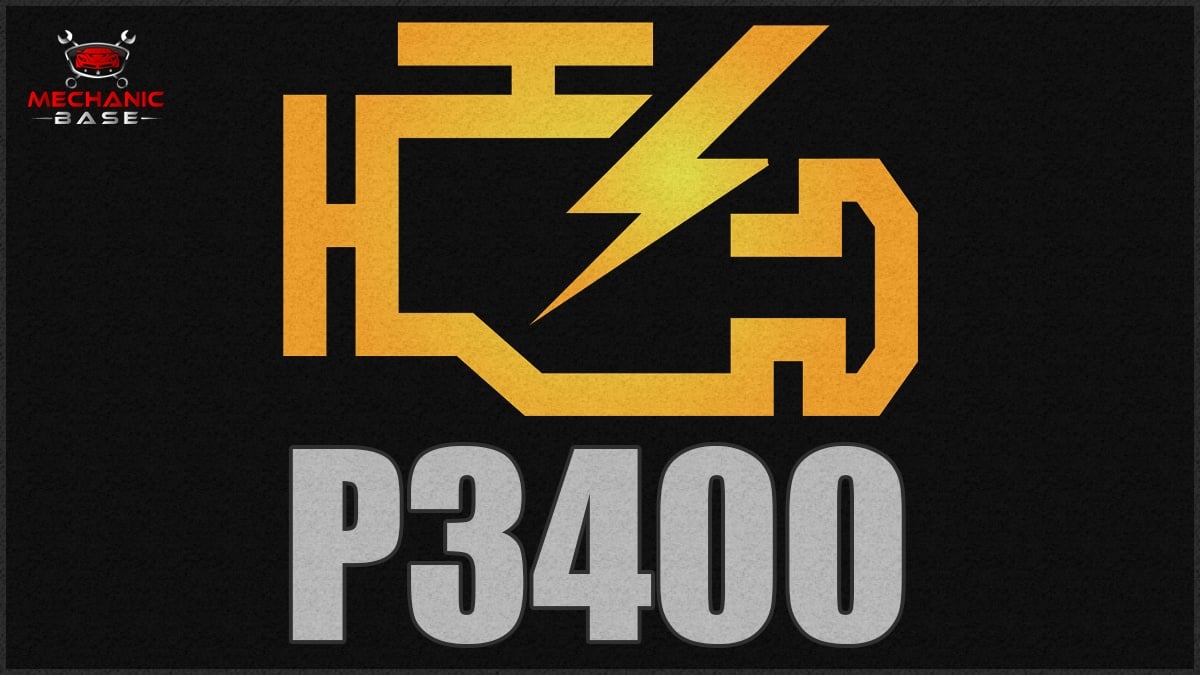 With today’s technology, automakers have found ways to save even more fuel, even on higher-powered engines. One such invention is the cylinder deactivation system, which helps to cut back on fuel consumption. However, when the Check Engine Light comes on and the P3400 code sets, you know there’s a problem with this system.

In this guide, we look closer at what the P3400 trouble code means. We also examine the top symptoms, causes and seriousness of the DTC. By looking at how to diagnose and repair the P3400 code, you may be able to save yourself a trip to the mechanic. Plus, we answer your top questions so you aren’t left in the dark.

The P3400 code is an engine error signifying “Cylinder Deactivation System – Bank 1.” When the PCM (Powertrain Control Module) sees a fault or malfunction in the cylinder deactivation system, it will stop working as intended. Any component that stops the system from working can cause this code.

So, what is the cylinder deactivation system? It’s a sophisticated setup that permits the engine to run with fewer cylinders than what is installed. By only using some of the cylinders, the car consumes less gas, but can still produce plenty of power. For example, you may have a V8 engine that runs on four cylinders when possible.

Many of today’s top automakers use these systems. You can find the system and trouble code on Honda, Chevy, Chrysler, GMC, Pontiac, Dodge and others.

Because the P3400 code signifies that the cylinder deactivation system isn’t activated, the most common symptom has to do with using too much fuel. However, other issues can also occur. Here are some symptoms that you might notice.

It may seem most obvious that the problem lies with the cylinder deactivation system, but that’s not always the case. In fact, simple problems can also lead to the P3400 trouble code, such as low oil. Here are a few causes to consider.

Medium – In most cases, there’s nothing serious about the P3400 code. Because there’s a fault with the cylinder deactivation system, the car is going to continue running on all cylinders by default. Therefore, if you have an eight-cylinder engine, it won’t harness back to four cylinders and save fuel.

The biggest problem you might see is that the car uses more fuel than normal because of the additional cylinders running, and there could be some minor performance concerns, depending on what causes the problem.

Even though the P3400 trouble code doesn’t threaten to cause permanent engine damage, the cause creating it could. For that reason, we still recommend having the vehicle diagnosed and repaired as soon as possible.

It’s difficult to determine the appropriate P3400 code fix without first figuring out what’s causing it to come on. For that reason, a complete diagnosis is needed before determining how to move forward.

We outline some diagnostic steps below. Once you’ve walked through them, you should know which one of these fixes would be most appropriate.

The most common mistake is to ignore the most common causes of the P3400 code. If the oil level is low or contaminated, the cylinder deactivation system can shut down. Considering how easy it is to fix these problems, it only makes sense to start with these problems.

Many home mechanics want to skip right over the obvious to more complicated issues. However, these problems don’t normally exist and are rarer overall. Instead of spending money and time on unnecessary fixes, it’s best to start with an oil and filter change.

How To Diagnose The P3400 Code

If you want to diagnose the P3400 code like a mechanic, you can follow these simple steps to figure out what’s wrong. For these steps, no special tools are needed. However, you will want a high-quality OBD-II code scanner.

Beyond this, you are getting into more advanced diagnostics and repairs. Whether you are dealing with an electrical short, a malfunctioning PCM or a tough oil passageway clog, you might find it beneficial to visit with a mechanic at this point.

Mechanic Tips About The P3400 Code

You could also notice some other problems with various cylinder solenoids. Here are just a few of the trouble codes that could be noted.

Depending on what needs to be repaired, you could be looking at a minimal or major expense. Repairing the car yourself will help to keep the price down. Still, we’ve included some average repair costs based on professional labor rates and parts.

Low or contaminated oil tends to be the leading cause of the P3400 trouble code. For that reason, it makes sense to start by checking the oil level and examining its quality. If you need to add more oil, make sure it matches the viscosity and type that is called for by the manufacturer.

What is a cylinder deactivation system?

The cylinder deactivation system is included with some of today’s vehicles to help save fuel. When all of the cylinders aren’t needed, the system will shut some down to reduce fuel consumption without hindering any of the power. Typically, the system helps a V8 engine run with fewer cylinders.

There should be no reason to stop driving because of the P3400 code unless it is causing other problems. The only major symptom you might notice is more fuel consumption. However, if the car engine doesn’t have the right oil or pressure, driving could lead to damage that’s irreversible.

To remove the code from the car completely, you must first resolve the problem. In many cases, the car either needs some more oil or an oil and filter change. Otherwise, you want to test the solenoids and clear the oil passageways. In severe cases, there could be an electrical short or trouble with the PCM.

It depends on what needs to be fixed. With a simple oil change, you may only spend $40, especially if you can perform the work on your own. On the other hand, the problem can be expensive to repair if there’s a major malfunction or difficult part to diagnose and you need a professional mechanic to help.

If your car is using more fuel than normal and you notice the P3400 trouble code with the Check Engine Light, you could be facing an issue with the cylinder deactivation system. In most cases, low oil levels or contaminated fluid could be to blame. In this case, you are looking at an easy fix. However, the problem could also be caused by something more complicated that requires a professional repair.

By ensuring that the P3400 code is quickly repaired, you keep the car engine running as it was intended. Not only will the oil levels be correct, but you can also ensure that the fuel economy is at its best. While it’s not a big deal to run your V8 engine on all cylinders, there are times when it’s simply not necessary, leaving you using more gasoline than needed. In today’s situations, it’s best to save where you can.