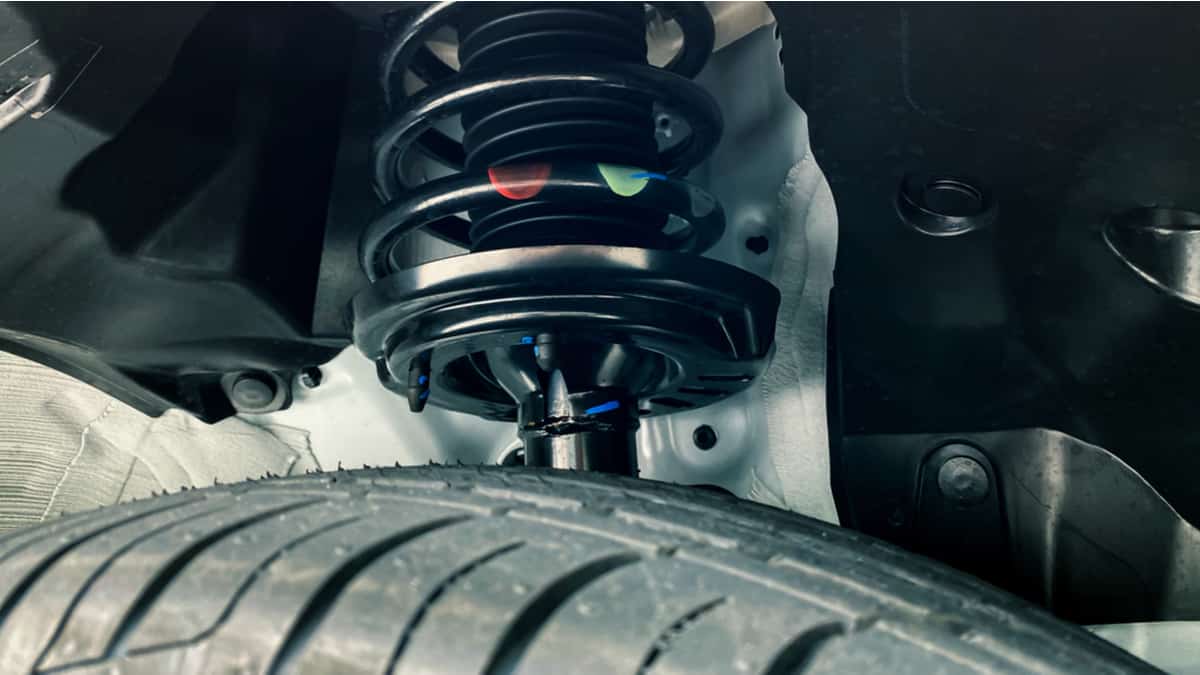 Struts are an integral part of the car’s suspension system. When a strut starts to fail, it can create numerous problems that affect drivability. That’s why you ask – how much does a strut replacement cost, and is there a difference between the front and rear struts?

In this guide, we evaluate the aspects that change the cost of replacement, and we discuss how often the struts should last. We also talk about the signs that struts are bad and evaluate whether you should drive with bad struts. At the end of our article, we show you the difference between the strut and shock.

How Much Does A Strut Replacement Cost?

Typically, it will cost between $400 and $900 to replace a pair of struts. There isn’t normally a big difference between the price of front or rear struts, but the front struts can be slightly more expensive to replace in some cases. The parts may only cost $250 to $500, while the rest of the price is spent on labor.

These are the average estimated cost of strut replacement per car model. The cost of replacing struts can also vary depending on your engine type and model year. The prices are per each strut and not a pair.

When you pick out any new car parts, the price is ultimately determined by what type of vehicle you drive. In general, many compact cars have lower cost parts than larger trucks and SUVs.

However, there are some exceptions to this rule. For example, if you drive a rare model or you have a luxury vehicle, you could end up spending a premium price to get the parts you need.

There are various brands to choose from, some of which are considered budget-friendly options. You can choose an aftermarket brand with a lower cost to save some cash now, but they may not last as long as you desire.

Instead, it’s best to opt for either OEM struts or pick a performance model from one of the top brands. While you will pay more to get Bilstein, Monroe or KYB struts, you will be much happier with the ride and longevity. These brands also offer warranty coverage for your protection.

READ MORE: OEM vs. Aftermarket Parts: Differences (& Which is Better?)

The best way to save money on strut replacement is to perform the job yourself. However, this task isn’t always easy and it’s not meant to be done by a novice.

If you head to an auto repair shop for new struts, the labor price can also vary dramatically. Choosing your neighborhood shop is usually cheaper than going to the dealership. Still, you want to make sure that the mechanic is trustworthy and offers a guarantee on the work.

When the struts go bad, there could be other parts that also need to be replaced. For example, you may also need to get strut mounts or springs, depending on the wear. Both of these will add to your overall cost.

How Often Do Struts Need to Be Replaced?

Struts are not replaced preventatively. Instead, you want to start inspecting the suspension for wear after about 25,000 miles.

In general, struts will last between 50,000 and 100,000 miles before replacement is necessary. However, if you drive on rough roads or you are aggressive, the struts can wear out quicker. You will also notice other suspension wear problems because of these issues.

How To Tell The Struts Are Bad?

When struts wear out, they can start to make noise. This isn’t a given, so you can’t bank on it, but it’s possible to hear a banging sound or hollow clunking, especially when going over bumps.

Because front struts are connected to the steering knuckle, you can also hear noises when turning the wheel. You may notice an increase in creaking and clunking sounds when you take a turn.

Struts are a part of the suspension system, helping to dampen the road’s imperfections. For this reason, bad struts are going to lead to an increase in discomfort. You will notice more changes as you hit bumps or you drive across an uneven road.

If you allow the problem to get worse, the struts will eventually get so bad that they bottom out. This condition simply means that the spring compresses too much, thereby reaching its travel limit.

Along with the comfortability aspect, there will also be several reductions in performance that become noticeable. As the struts wear out, the vehicle can start to dive or squat while accelerating or braking. It could even lead to a leaning condition as you take turns.

When the strut bearing wears, the steering will also suffer. It can become difficult to turn and feel less responsive. If your handling or steering performance is altered, you are putting yourself in danger on the road, so you want to get the problems resolved as soon as possible.

Bad struts cause handling issues that change how the tires touch the road’s surface. Because the tires no longer have complete contact with the road, the tread can wear unevenly. Worn-out struts are notorious for creating a cupped effect on the tread.

This cupping effect creates a variety of low and high spots on the tread. This occurs because the tires bounce up and down on the road surface while driving. If you don’t get the struts replaced at the first sign of trouble, you may also find yourself buying new tires, which dramatically alters your repair costs.

Your car’s struts are filled with hydraulic fluid that should remain within the structure when everything is working as it should. If the struts are bad, the oil can start to leak out of the casing, indicating that there’s a problem.

This oil seepage occurs as the seals get old over time. The oil may not land on the ground, as it is prone to accumulating on the outside of the strut itself. Feel the strut and examine it for an oily buildup to see if it is seeping.

LEARN MORE: 6 Symptoms of a Bad Strut (Front or Rear)

Is it Safe to Drive with Bad Struts?

Many people will put off getting the bad struts replaced to save money. For several reasons, we don’t recommend taking this route but instead encourage you to get the replacement as quickly as possible.

For starters, driving with bad struts can be dangerous. Not only can the ride become unstable, but your handling, steering and braking performance can be significantly reduced. If you cause an accident because you didn’t get the struts replaced, you aren’t going to be happy with the chain of events that happen next. Between having to pay for repairs and dealing with higher insurance premiums, you could also be responsible for other people getting injured.

Additionally, when the struts are bad, the car deals with much more stress, especially the suspension system. By procrastinating, you could end up needing more repairs down the road, which also means higher auto shop costs. From the strut mounts to the tires, there’s no reason to replace parts that would have remained in good condition if you had replaced the struts immediately.

Strut vs. Shock: What’s the Difference?

It’s common to hear people talk about struts and shocks interchangeably. While these are both important components of the suspension system, they are different parts with varying purposes. Yes, both of them are needed to improve the handling and ride of your vehicle, but the way they work is different.

Struts, on the other hand, are a damper but are also needed to complete the structure. The struts replace the upper control arm and upper ball joint that is used in another suspension system. This part is heavier and needs more space than shock absorbers. The internals of the strut are similar to the shock, thereby offering a damping function. However, it is strong enough to support the spring and hold the tire in its position. A lot of the side load on the vehicle’s suspension is held up by the strut.

A Mechanic’s Tips About Strut Replacement

Can You Drive With Worn Out Struts?

No, it is not recommended to drive with worn struts. This will adversely affect the handling of your car, and it can even be dangerous for road safety and cause an accident if your struts fail at higher speeds. Therefore, if you suspect that your struts are worn out – replace them as soon as possible.

What Happens If You Don’t Replace The Struts?

If you ignore the fact that your struts are bad and just keep driving, your car’s handling will get worse and worse and after a while your vehicle will become dangerous to drive on the road. Your struts can become so bad that your car can fail at higher speeds and cause an accident.

Should You Replace All 4 Struts At Once?

No, it is not necessary to replace all four struts at the same time. It is usually recommended to replace both struts on the same axle, but it is not a requirement as it can be quite expensive to replace two struts on a car. However, if you choose to replace just one, you must understand that your car’s handling will be affected.

How Long Does It Take To Replace Struts?

When budgeting for strut replacement, be sure to factor in any additional repairs that may be needed such as strut mounts, coil springs, a wheel alignment, or new tires. And always consult your trusted mechanic for an accurate estimate specific to your car before scheduling any repair work.