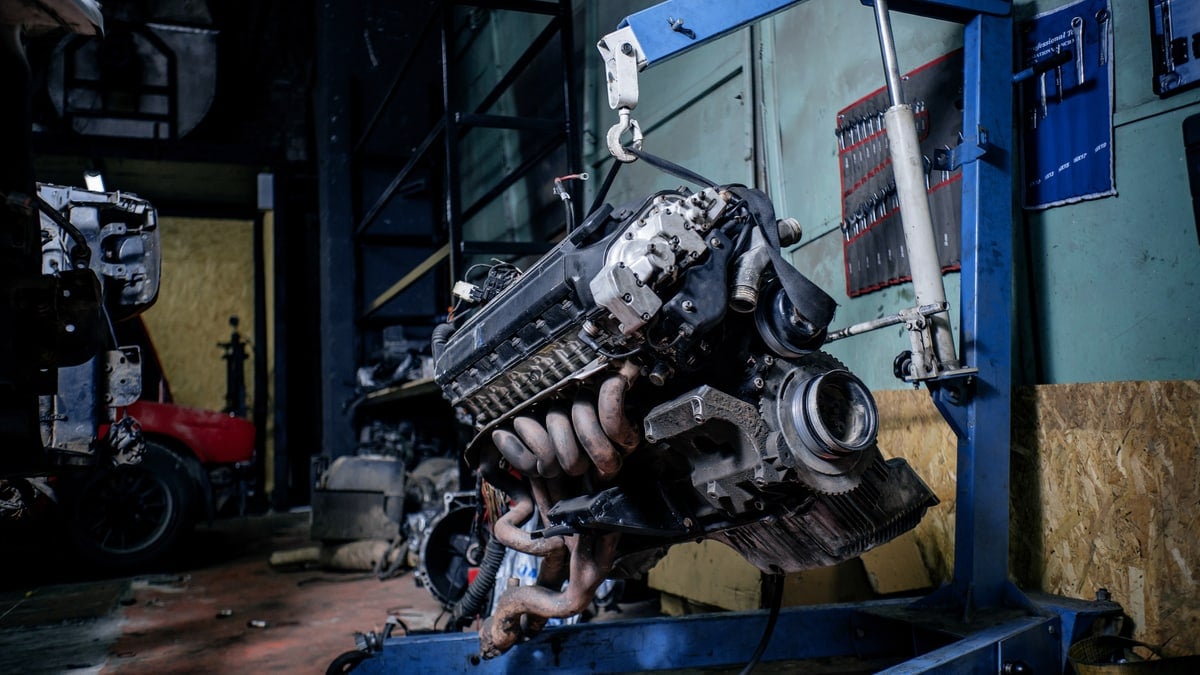 If your mechanic lets you know it’s time for a new engine, you already know that the job isn’t going to be cheap.

How much does it cost to replace a car engine? The answer might cause you to take a deep breath.

In this guide, we look at what plays into the average cost. We also discuss the different types of engines you can choose to replace your defective one with. Additionally, we show you how to prevent engine replacement, so you can save money.

How Much Does an Engine Replacement Cost?

On average, you can expect to spend anywhere from $1,500 to $7,500 for a typical car engine replacement, depending on what type of car you drive. Additionally, factors such as the labor rate, type of engine being replaced and the other parts that are needed will all affect the total cost.

If your engine has failed, you might be wondering if it’s worth replacing. As you look at the cost, you might consider purchasing another vehicle instead, which is a logical solution for some. There are several considerations to think about before you decide.

Should You Pay to Have a Car Engine Replaced?

For starters, how long are you planning to keep the vehicle? If other parts are failing and it’s costing you a lot to repair, it might be time to jump ship and cut your losses. On the other hand, if everything has been running well and you are confident the car can provide many more miles of service, an engine replacement could be looked at as an investment.

You must also consider the worth of your car. If your vehicle is worth $2,500, but the engine replacement is going to cost $5,000, you may decide to purchase something else instead. This car might be better served as a parts vehicle or maybe it needs to take up a spot in the junkyard for other people to benefit from.

The price you spend on the new engine is going to be dramatically impacted by how large the motor is. If you have a four-cylinder engine, the cost will usually be much lower than a large V8. As an example, you might spend $2,500 to get a four-cylinder, whereas you would quickly pay $4,000 or more for the eight-cylinder.

As the engine size gets bigger, the operation is more complex. Creating these larger engines naturally means the price will be higher.

RELATED: How Much Does A Car Engine Weigh? (Small or Large Engines)

You have multiple options when your engine fails. You don’t need to choose a brand-new engine, which will make the price higher than any other option.

There’s also the choice to choose a remanufactured or rebuilt engine, as well as a used motor. We discuss more about these options down below.

Putting an engine in is a tough job. Not every mechanic is willing to take on this task. However, when you find someone that is, you can expect that they are going to charge you a premium price for the hassle.

On average, an engine replacement can take 4 to 16 hours, depending on the complexity. You should be prepared to receive a charge for this long or longer, at whatever the current rate is. On average, labor rates are anywhere from $90 to $250 per hour, which can change widely depending on where you live in the nation. With this in mind, between $360 and $4,000 of the bill accounts for labor charges.

There’s more that’s involved in the engine replacement than simply the motor. All of the bolts and connecting parts will also need inspection and replacement when worn. You might need a new belt, hose, pulley or pump. With each of these additional parts, the price is going to jump higher.

Not only will the parts add more to the bill, but the additional labor has to go up in conjunction. Plus, you must factor in the consumables used, such as new motor oil.

Some shops won’t offer a warranty with the engine replacement. While you could pay less to visit this shop, you might not be willing to throw the money away on the repair. In these situations, you might want to pay a little more to get a guarantee.

The powertrain warranty doesn’t need to last long. But, you want to be able to drive away with peace of mind that there’s some recourse if there’s a defect.

RELATED: How to Find Out What Engine Your Car Has

New engines have zero miles on them because they have come directly from the manufacturer. You may have heard of the new engine being called a crate engine too. These are the most expensive option you can choose from.

In many cases, the new engine can cost more than the vehicle is worth. However, you know that the engine will be in the best condition possible.

The second best option compared to the new engine is the reconditioned or remanufactured motor. During this extensive process, the engine is brought back to like-new condition, ensuring it satisfies all of the standards set out by the manufacturer.

To complete this process, the entire engine must first be disassembled, so new components can be installed. It is also cleaned out well and must pass several rigorous tests before it can be considered good enough. Plus, the majority of these engines come with some type of warranty protection, although it won’t be as good as the new engine would.

With the rebuilt engine, there’s been a partial reconstruction of the motor, but it’s not performed to the reconditioned status. Part of the engine is disassembled, but only damaged or worn parts are going to be replaced. Still, the engine is going to be in better shape than the typical used motor.

Many mechanics will rebuild the car engine for a fee. The job that’s performed will directly correlate to how much work the mechanic is willing to put into it and how much you are willing to pay. The more experienced the mechanic is, the better the job will be. However, it’s difficult to get warranty coverage on the average rebuilt engine, but it’s still cheaper than the other two options we’ve already talked about.

RELATED: How Much Does It Cost To Rebuild An Engine?

The used motor is the one that comes out of another car and is put under the hood of yours. Most of these come from the salvage yard from a vehicle that houses the same engine. The junkyard will carefully remove it and sell it to you without any testing or guarantees. If you can find a yard that does test the engine or warranty it for some period, you will spend more.

When you purchase a vehicle from the salvage yard, find out what components come with it. Some yards offer components, such as the manifold, which helps you save money on new parts. Because you should already replace some other parts with your engine, it’s beneficial to get them as a package deal.

How to Prevent Engine Replacement?

There’s only one way to prevent an engine replacement in your car. You must take care of your vehicle and provide all of the recommended maintenance when it is due. With the regular oil change and periodic tune-ups, you ensure that the engine is always running as it should, allowing for less wear and tear.

Additionally, it helps to treat your engine with respect. You shouldn’t push the engine to work harder or do more than what it’s capable of. Being light on the gas pedal and treating the vehicle with care will help the engine to last as long as possible.

Finally, it’s important to think about what car engine you are using. Before you buy a car, it’s best to do some research because many cars have defective engines under the hood right out of the gate. For example, in 2016, Subaru issued reimbursement to owners of 2.0- and 2.5-liter naturally aspirated engines because they guzzled oil and led to premature failure. If you purchase a used car with a reliable engine, you have a better chance of getting your mileage out of it.

How Can I Pay For An Engine Replacement?

Ideally, you would want to pay for the engine replacement out of pocket with money you’ve saved up. If you are putting a small amount of money away each month, you will be prepared for this unexpected expense.

If you don’t have the cash or you prefer to rack up points on a credit card, you might choose this option instead. With a credit card, you can make monthly payments to cover the bill, thereby reducing the burden you feel all at once.

However, this option does lead to some interest charges. In the long run, you will spend more on the engine replacement than you would have if you had paid in cash.

If you have good credit, you might choose to take out a personal loan for the car repairs. The better your credit score is, the lower your interest rate will also be. You can also get a higher payout amount.

However, there will also be interest payments required, thereby causing a higher total in the end. Sometimes, these interest rates are higher than what’s found on your credit card, so compare the two before making the decision.

If you drive a new car or a Certified Pre-Owned vehicle, it might still be covered by the factory warranty. If that’s the case, let the manufacturer foot the bill for the engine replacement.

Even if there isn’t a factory warranty, you may still be signed up with a third-party company. With simple powertrain coverage, you could get a replacement engine. On the flip side, there might be a deductible payment you will be responsible for and you will have to handle the claims process. You may even have to put the money out of pocket and have the provider reimburse you.

RELATED: What Are Vehicle Service Contracts and Do You Need One?

No, a new car engine does not reset the odometer or your car’s mileage. The odometer is not connected to your engine, it is connected and calculated by the wheel speed. But an engine with less mileage can still be attractive to buyers.

How long does it take to replace a car engine?

It takes anywhere between 4 and 16 hours on average to replace a car engine, depending on the car model and engine type. In general, the older the car, the faster it is to replace the engine. Modern car engines have many more parts than older engines that need to be removed.

Is it worth replacing a car’s engine?

Is it better to replace or repair an engine?

Finding a replacement motor can be a good idea if you can find one at a good price. Repairing an engine can be time-consuming, which will result in high labor costs, but this depends on the severity of the engine damage. However, for some cars there are no cheap replacement engines, and in that case it may be more worthwhile to repair it.

Having to replace a car engine is never a fun experience, as it is usually very expensive. The only way you can try to prevent this type of engine replacement is to make sure you always maintain the engine according to the service schedule. Although it seems expensive to maintain it so much, it will be even more expensive to replace the engine.

I hope you enjoyed the article and now have all knowledge you need about engine replacement costs.