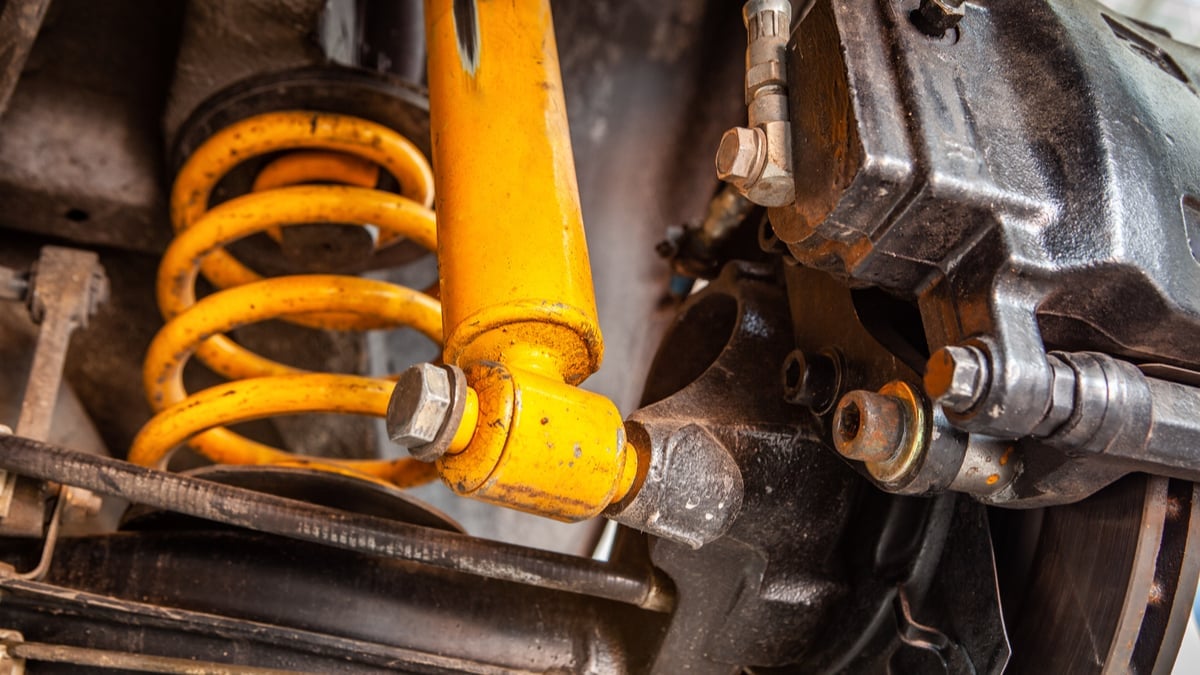 If you’ve found out that you need to have the shocks on your car replaced, you might be wondering how much you will need to spend for this repair. So, how much does a shock replacement cost and is there a difference between the front or rear shocks?

In this guide, we talk about all of the factors that affect what you spend on shock replacement. We also look at how often shocks should be changed, the signs that it’s time to get a replacement and we answer whether you can drive with bad shocks. In the end, we also review the biggest differences between shocks and struts.

How Much Does A Shock Replacement Cost?

You can expect a total replacement cost of between $200 and $750 for a pair of shocks, with the front shocks a bit more expensive than the rear. Shocks should be replaced in pairs, either in the front or rear. Parts alone could cost $100 to $350, while the rest of the money will be spent on labor.

The front shocks require more tools and are more time-consuming to replace in most car models, making them slightly more expensive to replace than the rear shocks.

There are many different factors that can affect the cost of shock absorber replacement, and we’ll go over each of them in a moment, but first let’s take a quick look at the replacement cost of some common car models on our roads.

With most car parts, you can depend on a slight difference in price based on what you are driving. Your smaller car is going to have cheaper shocks than an off-road truck or large SUV.

Additionally, if you drive a car that requires high-performance shocks or is a luxury model, the parts could also have an inflated cost. Thankfully, the price difference among shocks isn’t too drastic.

Shocks are one car part that are offered by multiple manufacturers. It goes beyond choosing whether you want OEM or aftermarket shocks. You can choose cheap shocks if you want to save a few bucks, but the performance won’t be the same.

Instead, you might prefer using shocks from a top brand, such as KYB, Monroe or Bilstein. All of these are worth the money and come with warranty protection for a better value.

As with any car repair, you can save a lot of cash if you perform the task in your home garage. With the right tools and moderate expertise, you can get the job done in a few hours.

If you do choose to have a professional complete the replacement, be selective about where you go. By choosing a local auto repair shop, you can save good money over a dealership. You just need to make sure that the establishment is reliable.

When the shocks go bad, you don’t have as much to worry about as when struts fail. Still, there are other suspension parts that are worn at the same time and it would only make sense to replace them during the visit.

Additionally, it’s possible that you might need new tires if the shocks were driven on while bad. However, you shouldn’t need to get a wheel alignment as you would with strut replacement. This would only be necessary if you got new tires.

How Often do Shocks Need to Be Replaced?

When used normally, shocks could last 50,000 to 100,000 miles. Shocks aren’t listed in the maintenance schedule for regular replacement. Instead, it’s recommended that you keep an eye on the suspension periodically to ensure everything is working as it should.

You might need to replace the shocks more often if you use a cheaper pair. Additionally, driving on rough roads or heading down the trails can cause shocks to wear out prematurely.

How To Tell If The Shocks Are Failing?

In a minute, we will discuss what happens to the ride in a car that has bad shocks. All you need to know for now is that the rough ride that’s created can do a number on the car tires. Without being able to keep the tires planted on the road where they belong, the tread is going to wear differently.

You might notice cupping occurring to the tread. If caught early enough, a tire rotation could fix the problem, along with changing the shocks. However, if you let the problem persist, you will need to purchase new tires in addition to the shocks.

In numerous ways, the ride can be dramatically affected by driving with bad shocks. The first problem is the unsteadiness, especially if any wind hits the car. If you find yourself correcting the car more often, it’s time to take a look at the suspension, including the shocks.

Worn shocks can also create rattling, rocking and shaking in the vehicle. While it’s normal to feel some of these things when hitting large bumps, bad shocks can create the same feeling even when traveling over minor imperfections. Shocks are needed to control the level of impact that occurs when a bump is hit. Not only is this uncomfortable to deal with, but it can lead you to lose control over the car.

You will also notice a change in handling when hitting the brakes. The car could start to dip or swerve. Overall, it could also take a little longer to stop the vehicle once the pedal is pushed, further leading to a dangerous situation on the road. This is even more concerning if you are traveling on slick surfaces when braking power needs to be optimal.

It would be naive to assume that you won’t feel any of these problems through the steering system when the suspension is failing. As you deal with more bumps and swerving from the bad shocks, you are sure to feel something happening in the wheel too.

As you drive across uneven surfaces, you may notice more vibration occurring in the steering wheel. This can be normal, but what’s not is when you feel those vibrations across smooth road surfaces. If that happens or the vibrations become worse when hitting the highway, it’s time to have the vehicle closely inspected.

We have a whole article about the subject, so if you are more interested in this, we recommend checking it out instead.

Can You Drive with Bad Shocks?

First, you aren’t going to have a comfortable ride. As the shocks get worse, the car is going to jump around, even on smooth surfaces. This is going to make even the shortest drive unbearable. Plus, you could easily lose control of the vehicle with all the excess bouncing.

On top of that, driving with bad shocks is only going to create higher repair bills. Not only are you looking at wearing out the tires, but you are also putting more wear on the suspension components. What might have started out as a simple shock replacement could quickly turn into an entire day with the car at the shop having multiple problems fixed. For these reasons, it’s best to have the suspension looked at as soon as you notice that something’s wrong.

What’s the Difference Between Shocks And Struts?

The main difference between shocks and struts is that shocks are designed to dampen the up-and-down movement of the suspension and keep the car stable, while struts serve as the structural support for the suspension.

When you talk to the average person, you will hear them discuss shocks and struts as if they were the same parts, but that’s not the case. It’s true that they are both parts of the suspension system, but the ways they operate are completely different. Of course, it’s safe to assume that both increase better handling of the vehicle and create a better ride, but with a different operation.

In comparison, the struts will dampen the ride, but they are also essential to the structure. Struts take the place of the upper ball joint and control arm, so they are part of the overall structure. However, the shocks are lighter than the struts. Plus, they don’t take up as much room.

Either way, the internal components of the shocks and struts are similar to one another. Yet, the strut is stronger, providing the support that’s necessary for the spring while holding the position of the tires. Struts are needed to support the side load of the suspension, where the shocks are not.

READ MORE: How Much Does A Strut Replacement Cost (Front & Rear)?

A Mechanic’s Tips about Shock replacement

Is It Worth Replacing the Shock Absorbers?

Yes, if your car’s shock absorbers are worn, they are definitely worth replacing. New shock absorbers will not only improve the drivability and safety of the car, it will also prevent other suspension parts from wearing out sooner. This will result in money saved in the long run.

Can you replace just 1 shock?

Although you can replace just one shock absorber, it is not recommended. When replacing the front shocks, you could potentially replace only one shock if the other is in very good condition. However, the rear shock absorbers are often easy to replace and you should replace both on the same axle.

Should I replace all 4 shocks at the same time?

How long does it take to replace shocks?

It takes between 30 minutes and 4 hours to replace a pair of shock absorbers on a car, depending on the mechanic’s skills and car model. Replacing the rear shocks is usually much faster than replacing the front shocks.

If your car’s shock absorbers start to wear out, it is important to replace them as soon as possible. Not only will this improve the quality of your ride, but it will also help extend the life of your tires and other suspension components. New shocks aren’t cheap, but the cost is worth it when you consider how much they can improve your driving experience and safety.

I hope this guide helped you understand the costs of replacing shock absorbers and that you now have the knowledge to decide whether to do it yourself or have a professional mechanic do the job.