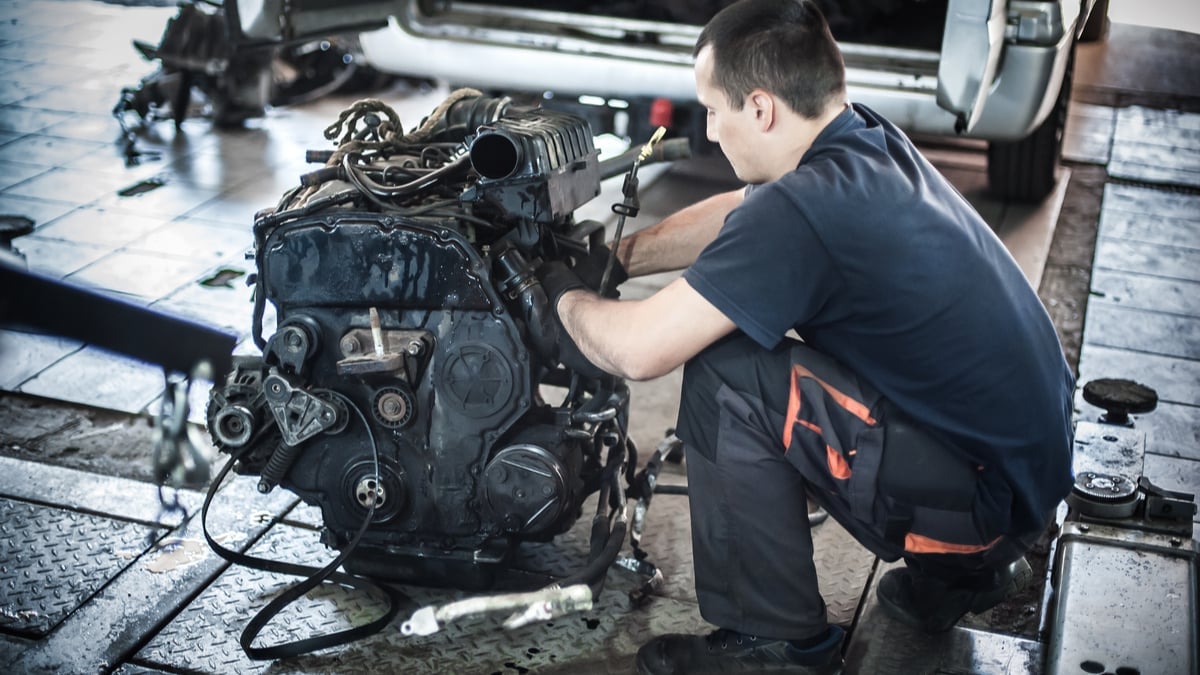 Whether you are planning to replace your vehicle’s motor or you are simply curious, you might be asking yourself – how much does a car engine weigh? With so many different engines on the road, it’s difficult to say that all motors weigh the same amount.

We look at several types of engines and discuss how the weight is determined. Our article also determines if the engine size affects performance.

How Much Does A Car Engine Weigh?

The size of the motor is going to be the biggest determination of its weight. Automotive engines are classified by how many cylinders it has.

In most passenger cars, you will find a four-cylinder engine beneath the hood. However, larger vehicles are going to be equipped with six- or eight-cylinder engines, many of which are arranged in a V-shape configuration. With each cylinder that’s added, more weight is tacked on as well.

Another factor determining the weight is the material used for the construction. A cast iron engine is going to be heavier than a motor constructed from aluminum.

An older engine might be made from cast iron, causing it to weigh more than what’s found in a newer model made from aluminum. That’s why some car models weigh less as they get newer.

The larger the cylinder holes are and the further the pistons need to travel, the more weight you can expect. Because of this reasoning, a large four-cylinder engine could weigh more than a compact six-cylinder motor.

The model year of the engine also impacts weight. The newer the engine is, the more likely advancements were made.

In some cases, these advancements can lower the weight. However, new technology can also lead to a higher weight as additional equipment is needed.

How Much Does a V8 Engine Weigh?

The typical V8 engine weighs around 400 to 700 pounds (180 to 320 kg). In a large pickup or SUV, you will often find the heaviest V8 engines. However, not all V8 engines are large and heavy. In fact, both the Ford/Jaguar 3.9-liter V8 from the 1990s and the GM 215 V8 were considered smaller eight-cylinder engines that weigh less than most.

How Much Does a V6 Engine Weigh?

Most V6 engines will weigh between 300 to 450 pounds (140 to 200 kg), but the same factors are in play. The V6 engine looks similar to the V8 motor, but it contains two fewer cylinders, so you can expect the weight to be reduced overall.

Displacement doesn’t always change the weight dramatically. An example of this can be seen with the Ford EcoBoost V6 engine. The 3.5-liter V6 motor weighs 449 pounds, compared to the 2.7-liter V6 that only goes down nine pounds even though it is smaller.

How Much Does a 4-Cylinder Engine Weigh?

The average weight of a 4 cylinder modern aluminum car engine is 200 to 350 pounds (90 to 160 kg), quite much lighter than a v6 or v8 engine. If it’s a cast-iron block you can expect it to be slightly heavier than an aluminum engine.

How Much Does a Diesel Engine Weigh?

The average weight of a diesel engine for a car is between 400 and 700 pounds (180 to 320 kg). This depends on the size of the diesel engine, but diesel engines are usually heavier than petrol engines.

The design of a diesel engine naturally makes it heavier than a comparable gas motor. Diesel engines produce more torque than the gas-powered variant, so it needs to be built differently. This added durability leads to more weight.

Engine size won’t tell you the durability of the motor. How it is used and the vehicle it is placed in will have more effect on longevity than size. Larger engines don’t work as hard as the smaller engine does, but it also contains heavier parts, so more fuel and power is needed. A heavier engine can wear out just as fast as a lighter engine. However, it can also be more expensive to repair.

Years ago, it was safe to assume that the larger the engine was, the more power it output. However, that is no longer the case.

Large engines are typically used in high-performance vehicles for better speed and acceleration. However, these heavier engines also reduce braking performance because there is more weight that must be stopped. Bigger engines can also make it more difficult to change lanes and take turns.

Additionally, lighter engines can be more efficient. With a lower weight, less fuel is needed to move the vehicle. That’s why it’s important to evaluate the performance and weight of an engine before deciding what’s best.