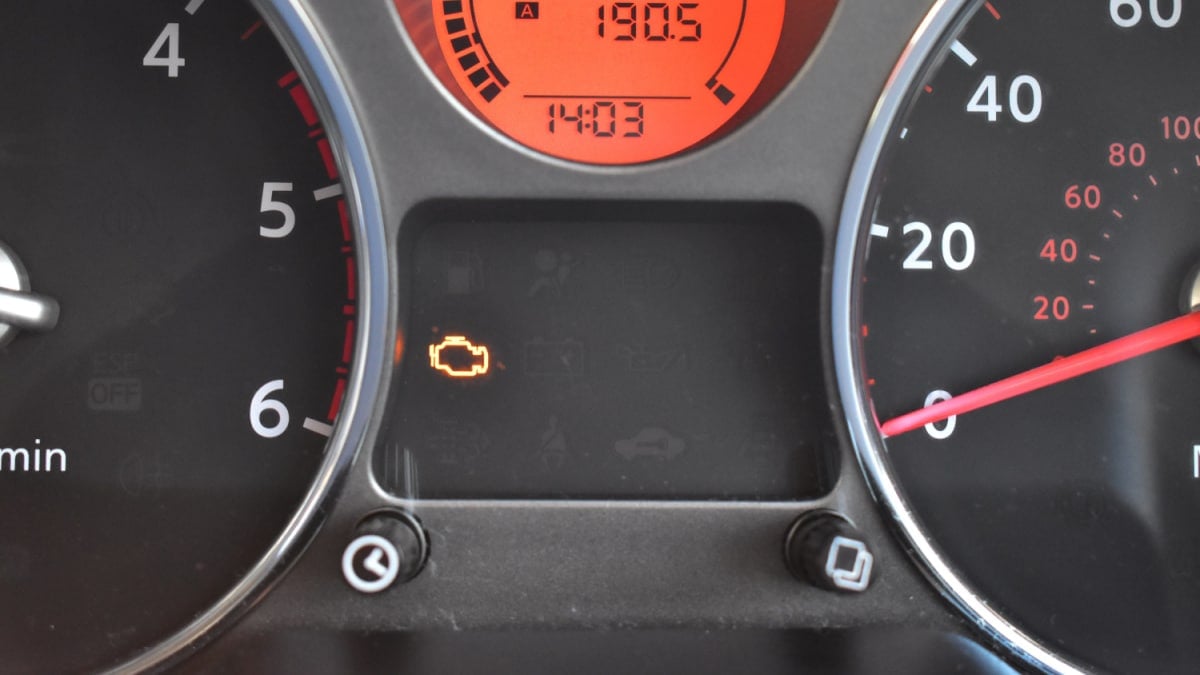 The dashboard features a bunch of different warning lights to keep you informed about the status of your vehicle. One such warning is the Engine Management Light, but what does it mean and what should you do about it?

In this guide, we cover the basics of this engine warning light and touch on what causes it to come on. We also show you some ways you can fix it and talk about whether it’s worth selling your car with this light on. Finally, we take a moment to answer a few of your top questions.

What Does The Engine Management Light Mean?

The Engine Management Light is also known as the Check Engine Light, and this light illustrates the shape of an engine to tell you there’s a problem. The light can come on for a mild issue, such as a loose gas cap, but also tells you when something major is wrong, such as engine damage.

When the amber-colored light illuminates, it normally means that there’s a malfunction somewhere that may not be an emergency. While it should be checked right away, it’s probably nothing that’s going to cause immediate engine damage. Left unchecked, it could lead to further damage. For example, you may be able to drive with a faulty oxygen sensor, but it will eventually cause the catalytic converter to fail, which is an expensive repair bill.

On the other hand, if the engine light blinks, there’s a more serious problem at hand. You should stop driving immediately to find out what’s wrong. Some vehicles also have a red-colored engine light that only comes on when there’s an emergency. Check your owner’s manual to find out what the various Engine Management Lights mean for your vehicle.

Causes Of An Engine Management Light

If the Engine Management Light comes on, you may be looking at multiple issues. The only way to know what’s wrong for sure is to complete diagnostics.

While there are hundreds of possible explanations for the engine light to come on, these are some of the top causes.

The engine is comprised of multiple sensors that tell the computers how much fuel and air is necessary for proper combustion. If a sensor has failed or is giving bad readings, the Engine Management Light may come on. In some cases, the sensor itself is bad, while other times, there’s a legitimate imbalance and the sensor is doing its job.

The oxygen sensor is a common culprit of this malfunction. These O2 sensors read how much unburnt oxygen is passing through the exhaust, so adjustments can be made. There’s also a mass airflow sensor that measures the amount of oxygen moving into the engine. If either is faulty, the engine could run rough and you will notice a reduction in fuel economy.

If one of the cylinders doesn’t fire when it’s supposed to, a misfire occurs. This problem will typically cause the Engine Management Light to flash, signifying that there’s a major problem. You don’t want to continue running your vehicle with a misfiring engine.

In some cases, the problem stems from a fouled spark plug or a bad ignition coil. However, you don’t want to overlook the possibility that there’s something damaged with the cylinder as well.

We’ve already discussed how the engine needs both air and fuel to operate, so if there’s something keeping fuel from entering, the Engine Management Light could come on. Blocked fuel injectors are a common cause for this warning light.

Fuel injectors deliver fuel to the engine. Typically, there’s a fuel injector for every cylinder and they are timed by the ECU. If a clog occurs, one cylinder won’t get the fuel needed, which could lead to a misfire.

A blocked or failing fuel pump can also create problems. The pump delivers the fuel to the engine through the injectors. However, if the pump fails, delivery can’t occur.

It’s hard to believe that something as small as the gas cap can cause such big problems, but it’s also a common complaint. If you just filled up the gas tank, the cap could be the reason that the light is on.

If the cap isn’t secured, it will trigger the engine light. Additionally, if the cap has become cracked or it’s missing, you will have the same problems.

If the Engine Management Light is blinking or red, the damage might have already occurred. This light tells you to pull over immediately and stop running the engine.

Depending on what caused the engine damage, it might still be repairable, so you don’t want to take any chances. Have the car towed home or to the shop if you can’t check it where it sits.

How To Fix An Engine Management Light

Before you do anything else, it helps to check the fluid levels. Running an engine without the right amount of oil is a surefire way to ruin it.

Pull out the dipstick and wipe it off with a towel. Re-read the dipstick to see where the levels are at and fill it up if needed. You should also check the coolant and transmission fluid at the same time, just in case either of these is low.

If you’ve recently been to the gas station, you should double-check the cap. It’s possible that you didn’t put it on tight enough, causing the Engine Management Light to come on. If that’s the case, simply secure the cap and the light should turn off.

If the cap is damaged or missing, you need to replace it. You can get a new gas cap at any auto parts store for around $10, making this an inexpensive repair.

With your compatible code scanner, you can read the faults set by the computer. Simply plug the OBD-II scanner into the port under the steering wheel to see what codes come up. If there are too many to discern at first, reset the codes and drive the car for a short time. If the light comes back on, you can re-read the codes to see what was set most recently.

Figuring out what the codes mean can be the trickiest part of this step. Because you will get a number and letter combination, such as P0300, you won’t immediately know what’s wrong. Thankfully, you can use our trouble code database for in-depth guides on the most common faults.

If you can’t determine what’s wrong or you are having difficulty understanding what the trouble code means, it might be better to visit with a local mechanic. After paying a diagnostic fee, you will have a better understanding of what’s wrong and how to fix it.

From here, you can still choose to fix the problem yourself if you have the tools and the expertise. Otherwise, it might be better to trust the professionals, especially if engine damage is a factor.

Can I Sell a Car With the Engine Management Light On?

It’s possible to sell the car with dashboard warning lights on, but you will likely take a hit on the value. If you run the KBB value of your car, you won’t be able to choose the valuation of a vehicle in Good condition. Instead, you would have to choose Poor or Fair, which dramatically reduces the value. If you don’t know what’s wrong with it, you could lose even more money.

For this reason, we recommend at least figuring out what’s wrong. If you know what needs to be fixed, you can tell the potential buyers so they have more peace of mind.

Better yet, why not repair the problem before you sell the car? You want to take this route, especially if the repair is simple and inexpensive. Don’t leave someone else with the burden of fixing it unless you don’t care how much money you receive for it.

Even if you plan to trade the car into a local dealership, you can expect them to take money off for the dashboard warning light. The technicians will check the codes and determine what needs to be fixed and then reduce the price of the car by at least that amount, if not more. Plus, the dealership is going to use its higher labor rates to justify giving you less money.

Is it OK to drive with the engine management light on?

No, when the warning light comes on the dashboard, you should take it seriously. While it could be a minor issue, there are plenty of faults that are serious and should be dealt with immediately. Plus, while the light is on, you have no way of telling if something else has gone wrong, leaving you unprotected.

Is the engine management light serious?

The amber-colored engine light that’s solid is typically not immediately serious, but you should never ignore it. Even if the problem is minor, it could lead to more damage if neglected. You would need to pay attention to a blinking amber light, as this shows a major fault is occurring.

What does a flashing engine management light mean?

When this warning light starts to flash or if it is a solid red color, you must take immediate action. This type of warning indicates that engine damage might already be occurring and there’s no time to wait. Pull over as soon as it is safe and diagnose the vehicle. If you can’t work on it where it is, call for a tow truck to haul it home or deliver it to the nearest repair shop.

The Engine Management Light should bring some concern and it should force you to take action. With that said, there are plenty of reasons that the Check Engine Light comes on for minor problems and easy-to-fix complications. With the help of a code scanner, you can tell what’s wrong, so you can keep your vehicle in good working condition.

On the other hand, there’s always the chance that the Engine Management Light is on because of a major problem. For that reason, you should always diagnose the problem right away.