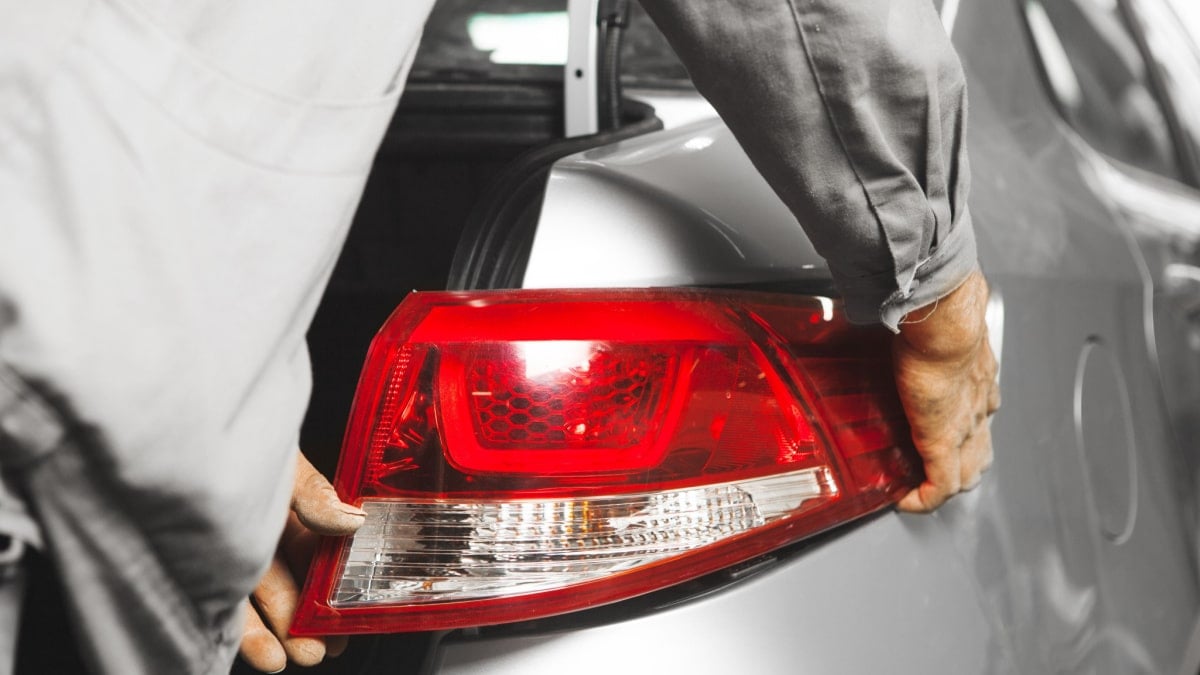 Before you hit the road, it helps to check all of the lights and signals around the car to ensure your safety. If you notice something is wrong with a tail light, you’ll want to fix it immediately. That brings you to the next logical question – how much does it cost to fix a tail light?

In this guide, we evaluate the different types of repairs and the approximate costs. We also cover the basic steps to replacing a tail light bulb and assembly.

How Much Does It Cost to Repair a Tail Light?

Since the repair cost of a tail light will vary depending on what you want to replace, here is a little more detailed information about each type of tail light replacement.

One of your cheapest fixes is to replace a blown-out bulb. Some tail light designs need a bulb and a cover. With this configuration, you can take out the old bulb and put in a new one for a minimal amount.

You could spend $10 or more on a compatible LED bulb, plus you need to make sure your vehicle can handle the LED replacement. If you are putting an LED bulb on one side, you want to do the same with the other, so they are equal.

The tail lights run on a fuse, just like everything else with the electronic systems on the car. If the light goes out, the problem could be a blown fuse. In this case, you are also looking at a minimal amount of money and it’s an easy fix.

You want to find the fuse that runs the tail lights and test it. If there’s no power, replace it with a new fuse with an equal amp rating. On average, a new fuse should cost you $10 or less.

The fuse box for the taillights is usually located inside the car under the dashboard or in the trunk. Check your owner’s manual to find the correct location of the fuse box.

In some cases, you may be able to replace just the taillight cover/lens, which will be a bit cheaper than replacing the entire taillight assembly. This lens is also known as the cover. It can be purchased in a variety of styles and designs. In some cases, the cover just gets dirty, requiring restoration. An automotive light restoration kit costs about $20, and it’s simple to use.

If the cover or lens is cracked and hindering visibility, you need to replace it. On average, you can find quality covers for $20 to $200 per pair, depending on what type of car you drive. If you can replace the part yourself, you don’t need to spend any more money.

However, if you aren’t sure how to get the lens in place, you could cause more damage to the new part and might consider visiting a repair shop instead.

If you have a modern car with LED tail lights, you most likely won’t be able to replace just the cover/lens but will have to replace the entire tail light assembly, which we’ll cover in the next section.

If your car contains LED lights within the cover, as a one-piece design, it’s possible that you will need to replace the whole tail light assembly. You won’t be able to replace the bulb by itself when the light goes out.

If you drive a lower-cost car, the assembly could be far less than $100. On the other hand, it’s possible to spend more than that, especially if you are purchasing an assembly with LED bulbs or you need professional help to get it installed. For some car models, you can spend $300 or more for a tail light assembly with LED lights.

The worst possible scenario is that there’s an issue with the wiring to the tail light. These can be the most complicated to troubleshoot, causing you to spend a good chunk of time, especially if you aren’t sure what you are looking at.

If you need to pay a technician for a professional diagnosis, expect to pay about an hour or two of labor. Once the problem is determined, you also have the expense of fixing it, making it difficult to estimate what the price might be.

RELATED: Blinker Fluid – What is it & Is It a Real Thing?

Can You Replace a Broken Tail Light Yourself?

Most people can handle the simple job of replacing a tail light bulb or fuse by themselves. You don’t need special tools or any expertise. The same is true with most lenses, covers, and assemblies. If you can follow some simple directions, you should be able to get your tail light working once again.

On the other hand, complicated wiring issues should only be handled by a professional. Unless you understand the wiring and have a copy of the schematics for your vehicle, it might be best to visit a repair shop for help in this department.

How to Replace a Tail Light Bulb

If your vehicle has a separate tail light bulb from the assembly, you can take the blown bulb out and put a new one in. Overall, the direction remains the same across the board, but it’s always helpful to read your car’s service manual.

Here are some suggestions.

It’s often advised to replace tail light bulbs in pairs. If you are changing the bulb on the right side, you should perform the same procedure on the left side, ensuring the brightness is uniform.

How to Replace a Tail Light Assembly

If the entire tail light assembly needs to be replaced, we recommend reading the service manual first. With that information in hand, you can move on to our general guidelines.

The tail light assembly is made from a plastic material. While they are built to handle mild bumps and dings, they will not hold up against stress. Take your time and handle the assembly with care to ensure you don’t break any more parts.

Can I drive with a broken tail light?

No, it is not recommended to drive with any type of broken tail light. If the bulb is broken, it’s possible that cars behind you won’t see you, which could cause an accident. If the cover is broken, it can cause cars behind you to see it as a headlight instead of a taillight because of the color.

How long does it take to get a tail light fixed?

It usually takes between 5 and 60 minutes to fix a taillight, depending on what’s broken. If you need to change a light bulb, you can often do it in under 10 minutes, but if the taillight assembly needs to be replaced, it can take up to an hour or even more.

Can you put red tape over a broken tail light?

Putting red tape over a broken tail light is not recommended, but it can be a good temporary fix until you replace the tail light cover. There are actually special red tapes for tail light repairs that can save you some time.

Are brake lights and tail lights the same?

On some car models, the brake light and tail light will share the same bulb, with different circuits. So it is possible that only one of the circuits in the bulb is broken. On other cars, you will have separate bulbs for the tail lights and brake lights.

If you’re comfortable doing some basic repairs yourself, you can save yourself some money, especially when it comes to light bulb replacements. However, if you don’t feel confident fixing it yourself or want the job done right, then take your car to a repair shop.

Remember that driving without properly functioning tail lights can result in costly fines and even accidents and should therefore be repaired as soon as possible.