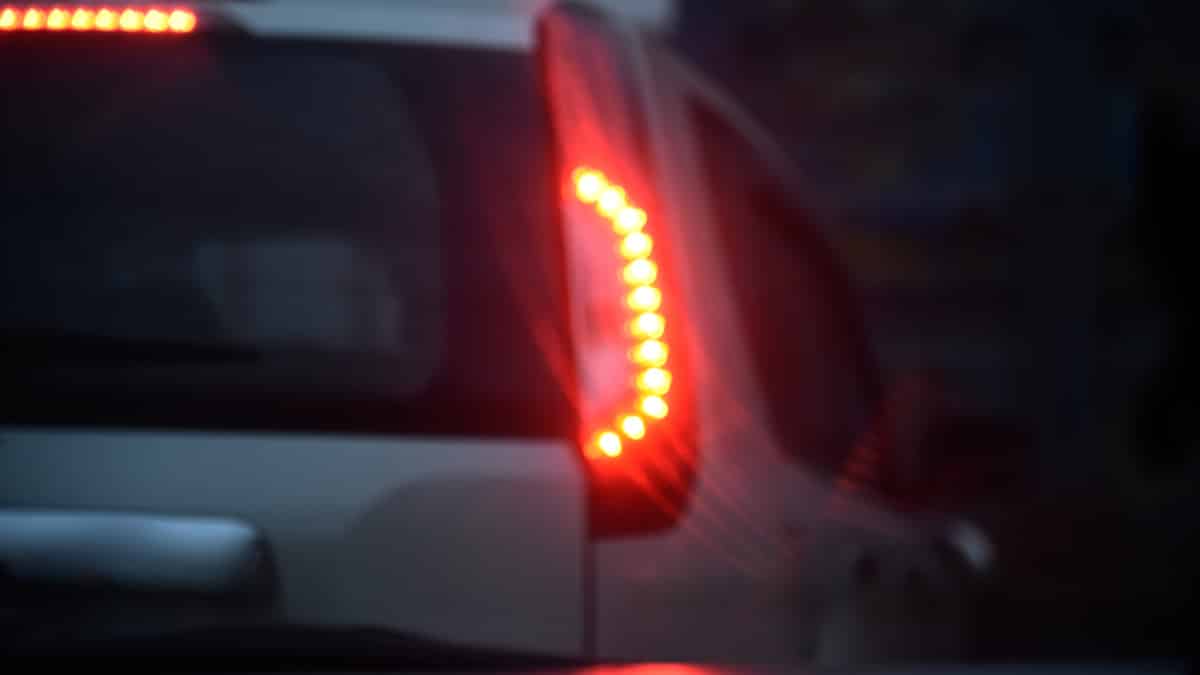 The longer you own your vehicle, the more likely it is that you’ll run into electrical problems. While those problems usually consist of burnt bulbs and blown fuses, occasionally, they can get a bit more complicated.

Don’t worry; while you’re stressed out and concerned about the cost of repairs, the answer is usually more straightforward than you think. Below we break down the most common reasons your taillights don’t work, but your brake lights still do.

Table Of Contents show
6 Causes of Taillights Don’t Work But Brake Lights Do
1. Bad/Wrong Bulbs
2. Blown Fuses
3. Faulty Control Switch
4. Wiring Issues/Bad Grounds
5. Corroded or Damaged Sockets or Plugs
6. Bad Ambient Daylight Sensor
Tail Light Troubleshooting Guide
FAQs
Is there a fuse for the tail lights?
Can you drive with no tail lights?
Do tail lights and brake lights use the same bulb?
How do you check your own tail lights?
Conclusion: Tail Lights Not Working But Brake Lights Are

6 Causes of Taillights Don’t Work But Brake Lights Do

The most common reason why your tail lights are not working but brake lights are is due to a bad or wrong type of light bulb installed. It can also be caused by a blown fuse, bad wirings, or corroded sockets or plugs. A faulty control light switch could also be to blame.

While these are not all of the possible causes, it’s the most common ones. Here is a more detailed list of the most common causes when taillights do not work, but brake lights do.

Brake lights typically use a dual filament bulb, and it’s possible for just one of those filaments to break. When that happens, you’ll get function out of one side of the bulb, like the brake light, but not the taillight.

Furthermore, many manufacturers use separate bulbs for the taillights and the brake lights. If the taillight bulb burns out, you’ll need to replace it.

Finally, if you just swapped out the bulbs, the problem might be that you’re using the wrong bulb type. Some people think that if it fits, then it’s the right bulb. That’s not true. If you still have the old bulbs check the part number and compare it to the replacement bulbs.

If you’ve already ditched the old bulbs, check your owner’s manual or Google to try and find the correct bulb for your vehicle! Keep in mind that the brand doesn’t matter, but the part numbers need to be cross-compatible if you’re switching brands.

While you may have a few burnt out bulbs, the more likely option is that your vehicle has a burnt-out taillight fuse. All you need to do to check is locate your vehicle’s fuse box and check the fuse with a test light or a multimeter.

If you don’t have either, you simply remove the taillight fuse and look at it. If you can’t tell if it’s burnt out, swap the fuse with another fuse with the same amperage. If the problem moves, then the fuse is the problem!

When you’re getting a new fuse, always use the correct amp fuse. It can be tempting to up the amperage to ensure that it doesn’t blow again, but too much amperage can lead to bigger problems if the fuse doesn’t protect the system like it’s supposed to!

At home mechanics often overlook it, but it’s one of the most common reasons your taillights will stop working. The control switch in the cab of your vehicle tells your taillights when you want them on, and if the switch isn’t working the way it should, you’ll never get your taillights on!

When this part is faulty, you will most often also lose the front parking lights.

Wiring issues are the bane of many mechanic’s existences. They can be a pain to troubleshoot and pinpoint the exact problem, but that doesn’t stop them from cropping up from time to time. Broken wires crossed lines, and excessive corrosion are all common issues, especially for older vehicles.

5. Corroded or Damaged Sockets or Plugs

If your vehicle’s taillights aren’t sealing properly, then everything inside gets exposed to the elements. While this can lead to problems all over, the most vulnerable area is the socket itself. These sockets can rust and corrode when they get exposed to the elements, leading to all sorts of electrical problems.

Whenever you’re replacing a bulb, you should look at the socket itself to see if it’s in good shape. If there is corrosion, use a wire brush and WD-40 to clean the socket. However, if the damage is bad enough, you’ll need to replace the socket.

Modern cars have automatic parking lights when it is dark outside. This means that they will shut off if there is daylight. This is different in different parts of the world, but have you ensured that it is just not too light outside for your tail light to come on?

However, it can also be caused by a bad ambient light sensor, which tells the car when it should be time to light up the taillights. This sensor is often located in the front windshield and it is not very common that it will go bad.

When you’re troubleshooting things, you need to KISS it. Not literally, of course, but you need to keep it simple stupid!

It’s Occam’s Razor in its simplest form; the simplest answer is usually the problem. Before you start digging into wiring harnesses and checking grounds, make sure the bulbs didn’t burn out and you’re getting power!

No power usually means a blown fuse, but it could mean a faulty switch too. Those three things, bulbs, fuses, and switches, make up 95% of the electrical problems associated with taillights.

Even better for you, they’re also the easiest to troubleshoot and fix! However, once you’ve ruled those three things out, you can move onto the next two. First, start by checking for power at the socket, but with a known good ground.

When you’re checking for power, make sure you’re getting good contact with the metal terminal in the socket. If corrosion or anything else is covering the terminal, you’ll need to clean it off first. If you end up cleaning the terminal, try the bulb again, the problem might have been the corrosion!

Is there a fuse for the tail lights?

Yes, there is a fuse for the tail lights for most car models. Some car models even have a fuse for each side. To find the fuses you need to find the fuse box, but it is not always easy to find. Sometimes it is located in the trunk, under the hood, or even under the dashboard. It is important to check your owner’s manual to see where the fuse is located.

Can you drive with no tail lights?

No, you cannot drive with no tail lights. It is not safe and it is against the law in most states and countries. If you have a problem with your tail lights, you should get them fixed as soon as possible. driving without tail lights is dangerous because other drivers will not be able to see your car as well, and they may rear-end your car. Also, if you get pulled over, the police will ticket you for having no tail lights. So it’s just not worth it to drive without them.

Do tail lights and brake lights use the same bulb?

How do you check your own tail lights?

Conclusion: Tail Lights Not Working But Brake Lights Are

Nothing is more frustrating than electrical gremlins. But with a little automotive know-how and a basic understanding of electrical principles, there’s no reason you can’t track down the reason for your faulty tail lights!

The most common reasons why tail lights don’t work, but brake lights are include:

It may seem overwhelming at first, but most electrical problems are cheap and easy to fix, and don’t come back if you do the job right the first time! Even better for the novice mechanic, these are problems you can usually quickly troubleshoot and fix yourself sometimes!