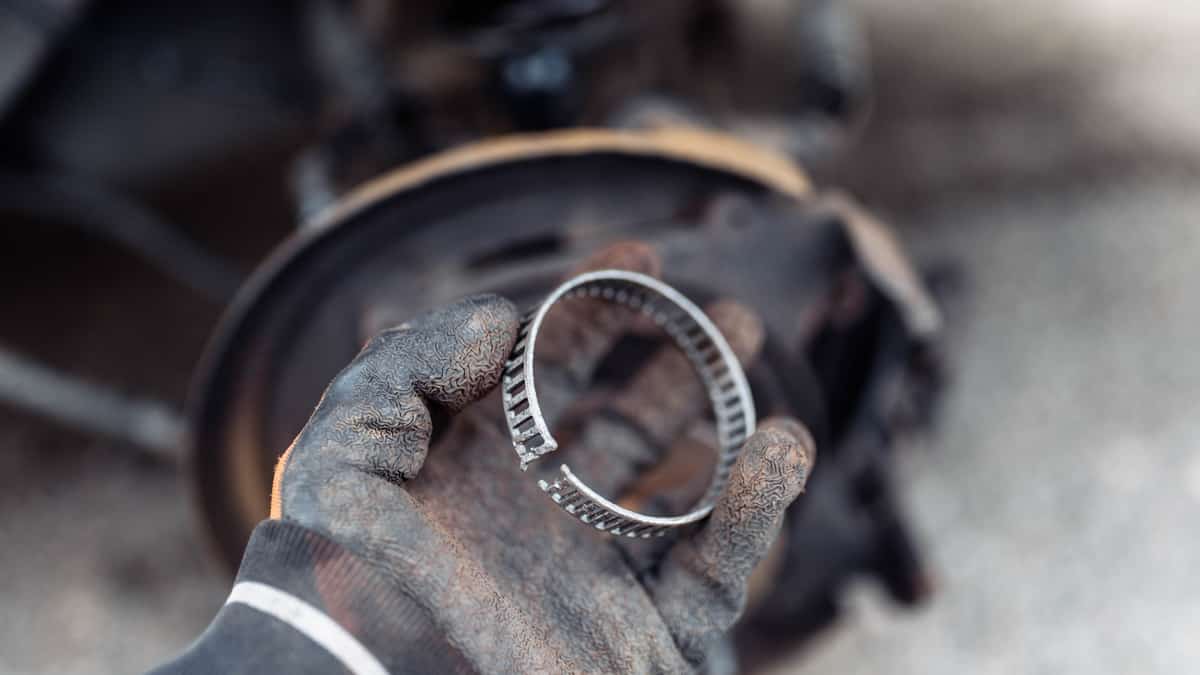 As automotive technology has advanced, safety systems have also been improved and expanded to provide a better user experience.

Today, the anti-lock braking system is a component of almost all modern vehicles. It is specifically designed to help you regulate your vehicle’s braking ability in an emergency.

As soon as the braking system shows problematic symptoms, you should tackle it as soon as possible rather than wait to repair it.

In this article, we look at the symptoms of a bad ABS reluctor ring, its location, function, and the replacement cost if you need to replace it.

Table Of Contents show
Symptoms Of A Bad ABS Reluctor Ring
1. ABS Light Comes On
2. Brake Pedal Pulsating at Low Speeds
3. No ABS function
4. Sudden braking from nowhere
What is an ABS Reluctor Ring?
ABS Ring Location
ABS Ring Replacement Cost
ABS Ring Cleaning
FAQs
How do I check my ABS ring?
Can you drive with a bad ABS ring?
How long do ABS rings last?
Can I replace an ABS tone ring myself?
Conclusion: Bad ABS Ring Symptoms

The most common symptom of a bad ABS ring is an illuminated ABS light on the dashboard. You may also notice signs like a pulsating brake pedal while braking at lower speeds. If you drive on slippery surfaces, you may notice that there is no ABS function.

You can experience many strange symptoms when one of the ABS rings starts to dysfunction. Here is a more detailed list of the signs of a bad or failing ABS reluctor ring to look for:

The most obvious indication of a problem with the ABS system is that the ABS Light appears on your car’s dashboard. The ABS light could also be called a check engine light in some cars that do not have a separate indicator light for the ABS frame.

The moment the light comes on is usually the main sign indicating that there could be a problem with your car’s ABS. You may have developed a problem with one of the sensors or a ring in the system.

Your car’s brake pedal can sometimes pulsate at low speeds or make a popping sound, just like when driving on ice. This means that your ABS is activated unnecessarily at low speed. This is a clear indication of a defective ABS ring.

A defective ABS ring is not considered a fault by the system, which is why the ABS warning light does not light up at first but only lights up when the system has completely switched off.

On various occasions, it may even go on and off several times. A faulty ABS ring provides a false signal, which causes the car’s electrical control unit to start the anti-lock braking system just before the car stops or even switch it off completely, reducing control of the car and extending the braking distance.

Normally, in most cases, you will only need to replace the ABS rings, and it is not necessary to completely replace the driveshaft and/or the joints.

During essential braking operations, the ABS should normally be activated to reduce the speed of the vehicle. Simultaneously, the loss of traction and skidding should be eliminated or reduced to an insignificant level.

If you notice that the car needs more time to stop under overwhelming braking conditions or starts to skid and lose traction, this indicates a faulty ABS. This could be due to excessively corroded ABS rings or a cracked ABS ring sending a faulty pulse to the ABS control unit, interrupting the ABS braking process.

This mostly happens if the ABS light is lightened up on your dashboard, though, so be sure to repair the problem immediately if you see it.

Some cars do also have a braking function in the ABS control unit, BMW especially.

With a brake system like this, the car can think that the car is skidding if an ABS toner ring is defective. This can cause the car to correct the skidding, which might be hazardous when the car is braking suddenly out of nowhere.

What is an ABS Reluctor Ring?

The anti-lock braking system consists of a controller, a speed sensor, valves, and the ABS speed sensor toner ring.

The system maintains the traction of the tires on the road, and the brakes’ performance at high speeds is significantly improved.

The ABS speed sensor ring is the main component of the entire system. It carefully monitors the speed of the wheels and transmits important signals that can alert the system electronically.

If the brake is applied heavily, the extra force applied can lock the wheels using the brake discs, which can cause the car to skid on the road. This is very dangerous but is mitigated by the ABS ring function.

The ring is used to detect the difference from the other wheels’ speed and generate a signal to the controller. If the ABS ring fails, the controlled ABS receives incorrect readings.

The ABS Rings are usually located around the driveshafts or the wheel hubs on most car models.

The front rings are often installed on the driveshafts if you have a front-wheel driven cars. Otherwise, you will most likely find them around the wheel bearings or wheel hubs.

The rear rings are often located on the rear driveshafts if you have a rear-wheel-drive car and around the wheel bearing/wheel hub otherwise. You can also find one ring inside of the differential on some rear-wheel-drive cars instead of two separate.

Furthermore, the quality is not much better than the front rings, which puts them in a more vulnerable state. If you have a 4×4 car, you will most likely find the ABS rings on all drive shafts.

The ABS rings themselves are often very cheap. The problem comes if there is no way to replace or buy just the ABS ring. You have to replace the whole driveshaft or whole wheel bearing and hub to replace the ABS ring in some car models. On these models, it will, of course, be much more expensive.

The labor costs are sometimes even higher than the part itself, mainly because the replacement process requires removing wheels and many other parts, which can be time-consuming. But then it also depends on the technician and what he will charge you for it.

How do I check my ABS ring?

You can visually inspect the ABS tone ring on most car models. Remove the wheel and look at the ABS ring while turning the wheel. Look for any cracks in the ring and if it is very rusty you can gently brush it off with a wire brush. However, be careful not to damage the ring.

Can you drive with a bad ABS ring?

Although you can drive with a bad ABS ring, it is not recommended. When your ABS ring is bad, the ABS control module will struggle to know if your wheel is spinning or not and this can lead to problems when braking the vehicle. It can also cause the ABS function to disappear completely.

How long do ABS rings last?

There is no fixed mileage or age for how long an ABS ring will last. ABS reluctor rings are made of metal and are placed in an area exposed to dirt, dust and water and this can cause them to go bad. Therefore, the lifespan of an ABS ring depends entirely on where you live and the roads where you drive your car.

Can I replace an ABS tone ring myself?

Replacing an ABS tone ring can be a challenge on many car models. You may need to remove the drive shaft to replace the ABS ring and this job can be quite tricky, if you are not used to working on cars. Use a repair manual to learn how to do it, but be prepared that it can be a challenge.

The main symptoms of a bad ABS reluctor ring include: