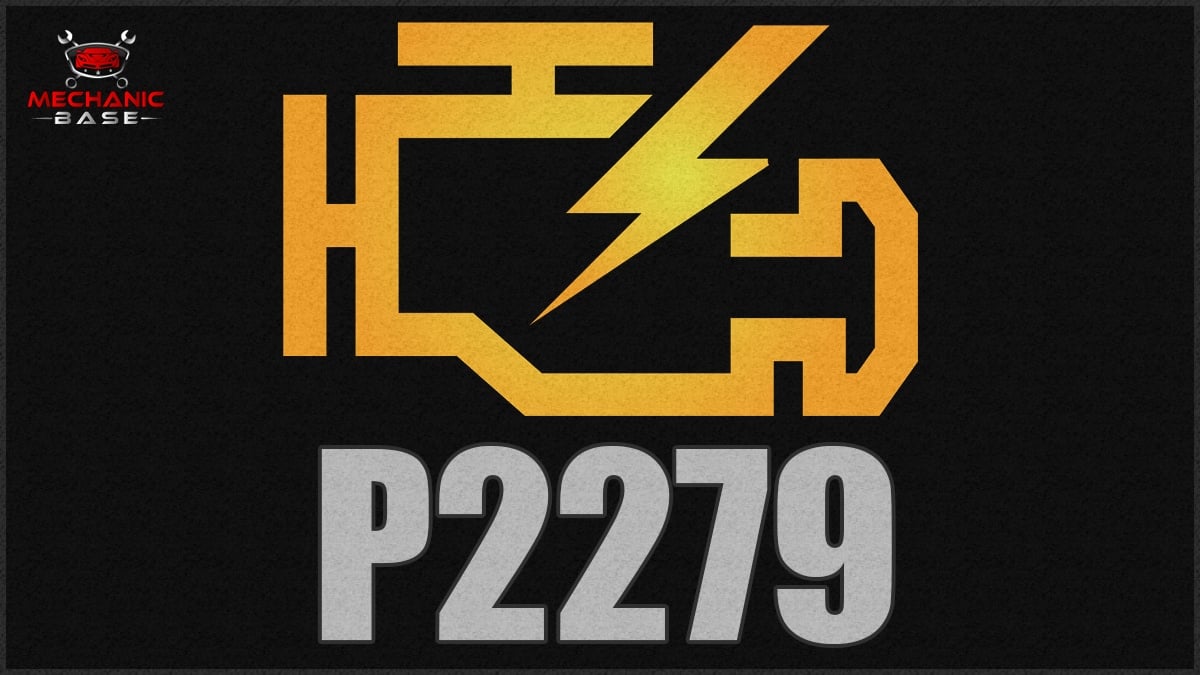 With the Check Engine Light on, you immediately go into a diagnostic mode trying to figure out what’s wrong with your vehicle. If you find the P2279 code in your scanner, you want to know how to fix the problem quickly.

In this guide, we cover the meaning of the P2279 trouble code, as well as the causes and symptoms. Not only will we show you how to fix it and what the repairs might cost, but we also answer your toughest questions.

You’ll even learn about some of the most common mistakes technicians make when trying to repair the P2279 code so you don’t have to fall into the same traps.

P2279 is a powertrain trouble code used by most manufacturers since 1996. It indicates that there’s an air leak occurring on the metered side of the intake manifold. More air is entering the manifold than the mass airflow sensor suggests.

The engine relies on the mass airflow (MAF) sensor to determine how much air is entering the intake manifold. There’s a hot wire used to measure the air and the engine control module (ECM) is responsible for heating the wire. By varying the voltage to the hot wire, the temperature is maintained. With this measurement, the MAF can read the volume of air passing over the wire.

With P2279 set in the computer, the Check Engine Light is sure to illuminate. Additionally, this code is going to be attached to a lean-running condition.

Here are the most common symptoms associated with the P2279 DTC.

Anything that creates a leak between the MAF sensor or throttle body and intake manifold can lead to the P2279 trouble code. For this reason, a complete diagnostic evaluation is required to figure out what’s wrong.

Severe – The P2279 DTC is considered serious. You shouldn’t continue driving the vehicle with this code set and you should take quick action to resolve what’s causing it.

While the engine runs lean, permanent damage can occur. If you neglect the situation, you may end up needing a rebuilt or replacement motor.

The only way to fix the P2279 code is to start by figuring out what’s causing it. Our diagnostic steps listed below will help you determine the best fix.

Until then, here are some of the most common repairs.

There are numerous ways a technician can mess up while diagnosing the P2279 trouble code. First, technicians can fail to inspect all of the hoses and the intake system for leaks.

Additionally, the throttle body tends to be commonly overlooked, even though it could create leaks. Finally, make sure the intake air temperature sensor is also checked for a vacuum leak.

How to Diagnose the P2279 Trouble Code?

If you want to diagnose the P2279 code as a professional, it’s important to follow the same steps. Here’s what most mechanics would do.

Whenever you find a leak, repair it. Some vacuum leaks can be difficult to track down. If you need more help, consult the service manual for your vehicle. Additionally, if you run into a dead end or don’t feel qualified to complete the repair, it’s best to schedule an appointment with a professional mechanic.

The cost to repair the P2279 code depends on what you find is wrong. Here’s a list of the most common fixes, with approximate costs for parts and labor.

If you can perform the repair on your own, your cost will probably be lower. As long as you already have the tools needed to complete the repairs, you’ll only need to put out money for the parts.

A Mechanic’s Tips About The P2279 Code

With the P2279 code, you may see other DTCs that help you determine what’s wrong. Some of these include:

Some manufacturers prefer to use a lean exhaust condition code instead of P2279. Still, the general meanings of both remain the same.

If other codes beyond these are present, you want to research them to pinpoint the problem. At MechanicBase, we offer a comprehensive trouble code library to help you figure out what’s going on.

Because trouble code P2279 indicates a vacuum leak in the engine, it can mean many different things. For this reason, it’s best to perform a complete diagnosis of the system before replacing or repairing any parts.

Yes, without the right amount of air entering the engine, the motor is running lean. It’s getting too much air mixed with the fuel, leading to many performance issues. If you allow the engine to continue running this way, permanent damage could occur.

You must first figure out what’s causing the leak. Once you know where it’s occurring, you can repair or replace the faulty part. The leak could be happening at a vacuum hose, intake air temperature sensor, throttle body, PCV valve, intake manifold or fuel injector seal.

Can I drive with an intake leak?

You should repair an intake leak as soon as possible. Even though the car may still run, performance will be hindered and the engine could stall. Additionally, allowing the motor to run this way could lead to bigger engine repairs down the road, which will also cost more money.

An intake air system leak occurs when a part is faulty between the mass airflow sensor and the intake manifold. Because of the leak, the system sucks in more air than it should, causing an imbalance in the air-fuel ratio. The offending parts could include a vacuum hose, intake air temperature sensor, throttle body, PCV valve, intake manifold or fuel injector seal.

With the P2279 trouble code present, you know your vehicle is suffering from an air intake leak. The difficult part is figuring out where the leak is and determining how to repair it. Any leak can be difficult to trace, especially if you don’t have all of the equipment you need or you lack mechanical skills.

If any part of this becomes overwhelming to you, it’s best to consult with a repair shop. While it might cost you some money, it’s better than driving with a lean running engine that could create further damage. Consider the cost as an investment into a car that will keep you on the road for many years to come when properly repaired.