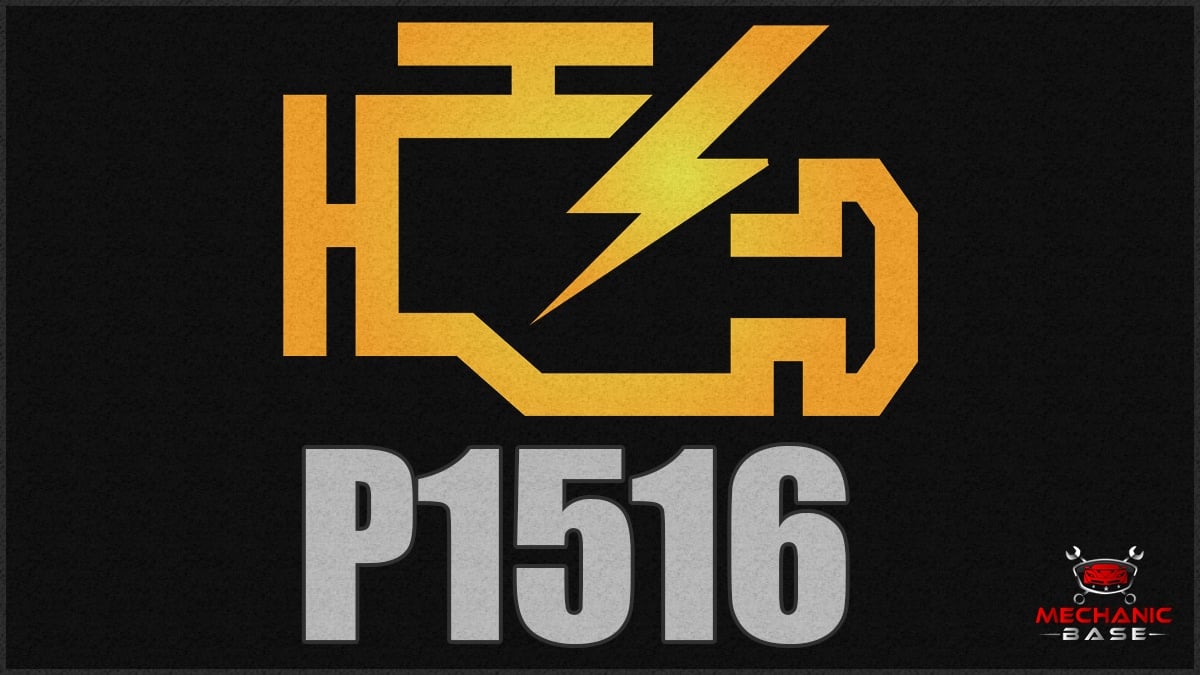 If you drive a GM brand vehicle, it’s not unusual to find the P1516 code when you use your OBDII scanner to see why the Check Engine Light is on. What should you do if this code is set in your system?

Let’s take a closer look at the meaning associated with the P1516 trouble code and the symptoms it might cause. From there, we can determine the causes and reveal some ways to fix them for good.

The P1516 is manufacturer-specific. Most often, it is seen with GM brand vehicles, and code P1516 indicates that the Throttle Actuator Control (TAC) system isn’t working as it should. This control system monitors the data from the throttle and compares it with the target. If these don’t line up, the ECM determines there’s a problem.

You will usually see this code with GMC, Buick, Chevy, Hummer and Saturn models. If you are driving a different model vehicle with this code, the general guidelines wouldn’t be the same.

The symptoms you will see with code P1516 are a check light on your dashboard, and then you may notice various engine performance issues such as stalling, lack of throttle response, or rough idling.

Here are a few of the most common P1516 DTC symptoms.

The most common cause of code P1516 is a faulty throttle actuator control module or the wiring to it. Given that the error code points to the TAC module, it is reasonable to assume that there may be something wrong with this part. However, that is not the only cause.

Severe – You don’t want to drive your GM vehicle with this code set. It’s best to get your vehicle to a safe location and have it towed to a repair shop if needed. Otherwise, you are putting yourself and others in danger.

At any time, you could lose the ability to accelerate, which could be deadly if you are pulling out in traffic. The engine could also stall and leave you stranded in an inconvenient location.

To fix the P1516 code, you will need to diagnose the throttle actuator control module and its wiring. If you find any problems with these, you need to repair or replace them. You’ll also want to inspect the pedal position sensor and throttle body. You should also clean the throttle body if it’s dirty.

With the right diagnosis, you can figure out what the problem is and get it repaired. It’s best to walk through the proper steps before making a judgment.

You may find that these are some possible repairs.

You don’t want to make any mistakes when attempting to diagnose the P1516 trouble code. That’s why it’s important to follow all of the procedures laid out in your service manual for your particular model. As an example, you want to be careful evaluating the Freeze Frame Data with your code scanner. If you are reading TPS voltage checks, you must know what’s normal.

In some car models, P1516 can be caused by a dirty throttle body, so you definitely want to try cleaning the throttle body and recalibrating it to see if you can get rid of the code.

It’s also important to check all of the connectors and wiring. Even the smallest amount of damage could cause massive problems. The last thing you want to do is replace a part thinking it’s broken when it’s actually something else.

How to Diagnose the P1516 Trouble Code?

You can diagnose the P1516 DTC just like the professional mechanics do, especially if you have a high-quality code scanner. Here are some basic steps to follow with a GM vehicle, but these should never circumvent what’s found in your car’s service manual.

If these steps don’t reveal the problem, you need to visit a professional repair shop to get more help. You may not have the diagnostic tools and equipment to get to the heart of the matter.

You can expect it to cost between $0 and $300 to fix the P1516 in most cases. If it’s a broken TAC module, you can spend $300 to fix it, but if it’s just a dirty throttle causing it, you can do it for free if you know how. But if the throttle body is broken, it can be much more expensive.

Your proper diagnosis will help you figure out what needs to be spent. Here are some examples of what your average cost might be, especially if you need to pay for parts and labor.

Mechanics Tips about the P1516 Code

The P1516 trouble code can be associated with several other throttle system faults. You could find multiple trouble codes, helping you figure out where the problem lies. It’s possible to also see these trouble codes with your scanner.

In some cases, it makes more sense to try and troubleshoot one of these codes before the P1516. In diagnosing and repairing the other issues, it’s possible that you will inadvertently fix the P1516 DTC.

To clear P1516, you need to use a diagnostic scanner on most car models. If you fix the problem causing the code, it can sometimes clear itself if you drive for a while. However, it is much faster to clear it with a scanner, and it is not even certain that your car model will clear it by itself.

Yes, P1516 will clear itself on most car models after a while. How long it takes depends on the car model you drive. However, on some car models, it won’t clear by itself, and in that case, you need to use a diagnostic scanner. You also need to fix the problem that caused the code, in order for it to get cleared.

Where is the throttle actuator control module located?

The throttle control module is often located in the engine compartment near the fuse box on many GM vehicles. Some engine types also have it integrated with the throttle body, and in that case you will find it on the intake pipe between the air filter box and the engine.