If you are at least a little bit into cars and car engines, you have probably heard about Seafoam before.

But is it really as good as people are saying, and can it damage the engine in some way? Is it worth the money and how much better will my engine be after one treatment?

In this article, we will go through what seafoam really is and if it’s worth the price.

Seafoam is a secret formula made to clean up carbon build-up inside of car engines and fuel systems. The Seafoam brand has been used for cleaning engines of fuel & oil deposits for the last 50 years.

What Does Seafoam Do?

Over the years, there will build up carbon & sludge inside of your engine & inside of the fuel system. This will lead to more wear on your engine and clogged fuel systems may cause misfires or other dangerous situations for your car engine.

Seafoam motor treatment is designed to liquefy the sludge deposits deep inside of the car engine so that they can safely be ejected out of the engine.

Cleaning internal engine parts is really difficult without taking the whole engine out of your car and then operating deep into your engine. It is both time-consuming and may cost a lot of money with all the new gaskets when you are reassembling it again.

That’s why Seafoam is such a good alternative to use instead of taking your whole engine apart.

Below, you will find a video review of Seafoam by Project Farm, which also shows different ways to use the Seafoam. If you want to continue reading instead, continue under the video. 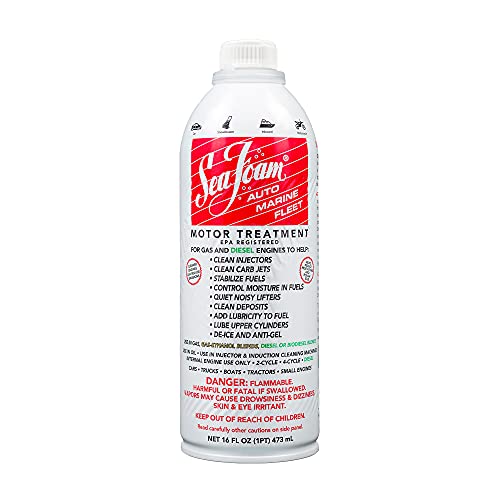 How To Use Seafoam

There are a couple of different ways you can use Seafoam. You can either put it into the crankcase/oil cap or into the fuel tank, or use it to clean the intake.

If you are looking for something to quieten down a noisy lifter or other engine parts & to remove oil sludge and clean up engine sludge, then Seafoam is the right product for you.

You will need to pour 8 oz of seafoam into the crankcase for every treatment. One bottle contains 16 oz which means that one can be enough for two treatments.

It is really recommended to pour half the bottle in before your oil service, drive 1000 miles and then replace your engine oil and pour the rest of the bottle into your crankcase. This will help to get as much dirt and oil out of the engine as possible.

When filling Seafoam, open the oil filter neck and use a funnel to pour in the substance to make it easier for you.

Another great way to use Seafoam is to pour it into your fuel tank to clean the fuel system. Old fuel can cause a lot of build-up in your fuel system parts.

Your fuel system contains a lot of different parts and some of them have really tiny passages, like fuel injectors – which means that they can easily get clogged.

If these parts get clogged, you might experience misfires or severe engine damages.

When you pour seafoam into the fuel tank, it will help to dissolve build-up inside of your fuel system.

One bottle is enough for 16 gallons of fuel which means that it will often be enough to use half a bottle depending on the size of your fuel tank.

The last way to use Seafoam is to pour it into the intake system. The intake system often gets very dirty with a lot of build-up during the years. Carbon build-up inside of the intake and the throttle body may cause conditions like misfires or lean/rich fuel mixture.

For this task, you should use the Seafoam Spray product.

The best way to do this is to make use of a friend. Remove the hose in front of the throttle body and tell your friend to start the car and rev it up to 2000 rpm.

While the car is running at 2000 RPM idle, you should carefully pour the Seafoam spray into the intake. You will notice when you use too much spray because the engine RPM will decrease. You want to pour in as much as possible without making the engine to die.

There are actually a lot of improvements you may get by using the Seafoam product, especially if you are using it on an old and tired car engine.

Here is the main improvements you can expect when using seafoam.

All of these types of use might give you better fuel efficiency.

Without oil sludge and build-up, your engine component will get more lubrication and better oil pressure, and this will, therefore, give you a much quieter & healthier car engine.

Because of the better air-fuel mixture and lesser friction of your internal engine parts, your car engine will most likely have lesser exhaust emissions. This is both good for the environment and any emission test you will do in the future.

Also, because of the better air-fuel mixture and lesser friction you might feel a great boost regarding your engine’s performance when you are pressing the accelerator.

Friction will cause your engine to wear out very fast. Also, dirt inside of the fuel system can cause lean conditions, which may also cause serious damage to your car engine. By using Seafoam for maintenance, your car engine will last longer and you will save money in repair costs.

Seafoam is a great product for those who want to clean their fuel & engine systems of sludge and contaminants. The liquid solution can be poured into the fuel tank and there it will mix with the fuel and clean your system. You can also use a special Seafoam spray in the air intake or use the Seafoam in the crankcase.

You will most likely experience fuel efficiency, performance improvements and a much quieter car engine by using Seafoam.