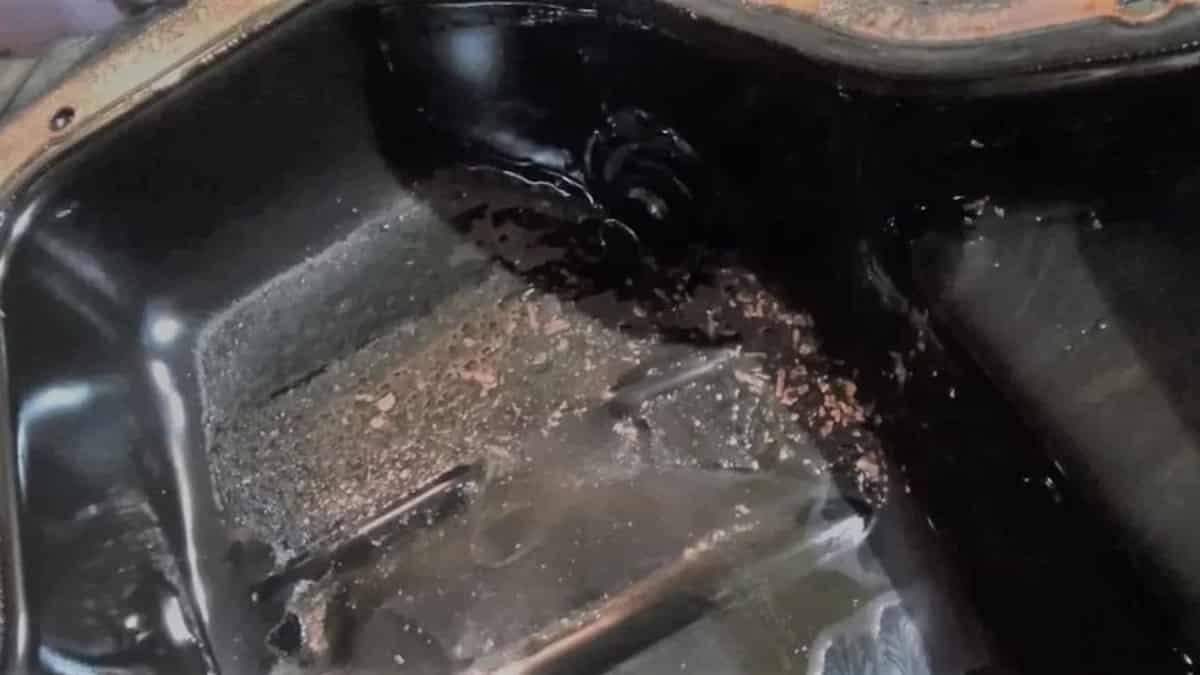 There are a few issues that are sure to cause major alarm with all car owners and metal shavings in the oil are one of them. If you notice metal shavings in oil while you are performing your regular maintenance, you will need to take quick action.

We look at the cause of oil contamination and show you the problems it can create. We also examine your next steps to ensure your vehicle runs the way it was intended to.

What Causes Metal Shavings in Oil?

The most common reason for copper metal shavings in motor oil is bad rod bearings or main bearings. If it’s aluminum or metal, it could come from the pistons, a faulty oil pump, or worn camshafts.

Motor oil is necessary for proper engine lubrication and to keep the parts working as they should. Without this lubrication, the metal parts would grind together, thereby reducing the life of the motor.

Sometimes, the speed of the pistons and a lack of lubrication can cause some metal debris to come off of the internal components. In a few instances, this wouldn’t be a big deal as the metallic particles were caught in the filter and removed during a tune-up. However, if an abundance of metal shavings are showing up in the oil, it indicates that the metal components inside are chipping away.

RELATED: How Much Metal In Oil Is Normal?

If the shavings you see in the oil are iron, you have an issue with one of the rotating parts inside the engine. The camshaft and crankshaft are both constructed of iron.

Plus, various valve train parts can be made from iron. Either way, you are facing a serious repair that shouldn’t be delayed.

Bronze, copper, and brass all have a unique appearance that is undeniably different from the rest. If you notice these colored shavings in the oil, you might be dealing with a worn-out busings.

The trouble might also come from a defective bearing inside the engine. While these parts are small, both spell big trouble for your engine when they fail.

This silvery gray color shaving can also look similar to aluminum. However, chromium and molybdenum are what the pistons are made from.

When you see these shavings, you can almost bet that the pistons are worn out. There might also be piston ring breakage occurring.

These shavings tend to occur because of wear on the surface of the engine. There are several worn-out components that can cause aluminum shavings.

It’s possible that you are dealing with the overhead camshaft bearings. Otherwise, it might be due to the aluminum caps.

What Problems are Caused by Metal Shavings in Oil?

When your vehicle is idling, everything should be smooth. However, vibration or shaking during idle could indicate that there are metal shavings in the oil.

When there isn’t enough lubrication for the engine components, the metal pieces begin to rub together. Over time, metal chunks fall off and end up in the oil. The rough idle is simply a symptom of the engine not running as it should.

When the engine doesn’t get the right amount of lubrication, you will likely notice some strange sounds. Because oil isn’t moving freely in the engine, you could start to hear some ticking noises.

In some cases, these sounds are present all of the time. Other times, you are only going to hear ticking when you first start up the vehicle.

An engine knock is a common sign of motor failure. It can be caused if you neglected regular oil and filter changes.

The longer you allow contamination to build up in the oil, the more stress the internal components are put under. Engine knock should always be taken seriously and looked at before the motor fails on you.

Decreased performance is always an indication that something is wrong with the engine. If you are stepping on the accelerator pedal but aren’t seeing a response, you should take notice.

Decreased engine power means that the motor can’t work as it should. It might be under additional stress from the contaminated oil.

You might also notice a Check Engine Light comes on or you see the oil pressure warning indicator. In some vehicles, there will be a Service Engine Soon or Oil Change Reminder light up on the dashboard.

Additionally, there are some alerts that the vehicle might be dealing with reduced power. When you see an indicator, it’s a sign that you should have the vehicle looked at right away.

If there are very few metal shavings in the motor oil, then there is often not a problem, wear and tear over time. However, there are many of them, and it happens after a short oil change; you may have an issue with your engine.

While you hope that fixing engine problems would be cheap and easy, it isn’t usually the case. However, the longer you let anything go, the more expensive it can become. What might be a simple fix, such as performing a quick oil change, can quickly turn into a complete engine replacement.

Take your car to the mechanic for a full inspection. They will be able to tell what sort of damage has been done and if it is repairable. In some cases, a part can be replaced, while other times, an engine rebuild might be a better solution.

Rebuilding the engine can get quite costly. You will probably pay $2,000 or more, depending on what type of vehicle you drive. However, the engine rebuild gives you numerous new parts with the motor. To perform a rebuild, the following will occur:

If you drive a small, compact car, an engine rebuild shouldn’t take long. However, if you have a pickup or SUV with a large V8 engine, it’s going to take some time. However, with proper engine maintenance and regular oil changes, you won’t ever need to worry about metal shavings in the motor.