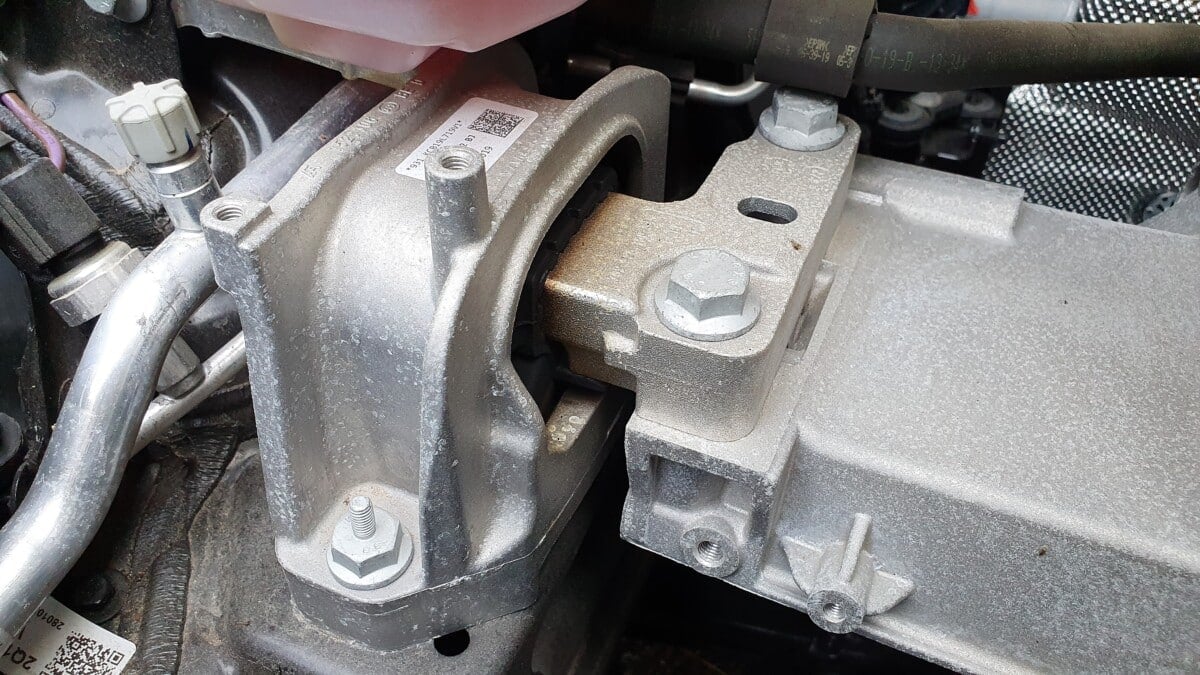 There is a lot of moving parts inside a car engine, and if you were to bolt the engine directly to the body of the car, it would be terrible vibrations, and you wouldn’t be able to speak without yelling inside the car.

That’s why there is something called engine mounts or motor mounts between the engine and the body. These take away most vibrations and other noises from the engine.

The bad thing is that these engine mounts can sometimes wear out and cause some trouble. Let’s begin with a quick look at the signs.

Symptoms Of A Bad Motor Mount

The most common symptom of a bad motor mount is noises from under the hood when releasing or depressing the accelerator pedal. You may also notice violent vibrations or unnecessary engine movements. If you open the hood and the engine is tilted, it’s also a sign.

Because motor mounts are not movable parts, there are just a few common symptoms that bad engine mounts can do. Here is a more detailed list of signs of a bad or failing motor mount to look for:

1. Noise from Under the Hood

The most common sign of all motor mount symptoms is that you may notice a strange noise from under the hood.

This is especially true if you hit hard against a bump or pothole and a loud rattling can be heard in the engine compartment. If you hear such a thing, you should contact the mechanic as soon as possible, because a defective engine mount can cause great damage if it is not repaired in time.

The engine mount is intended to dampen and reduce the vibrations of an ignited engine. So if you feel more vibrations inside the car than usual, there is probably something wrong with the rubber in your engine mounts. Rubber is a component that can wear out due to friction and extreme stress. The engine exerts both on the engine mounts, so it’s only natural that the rubber wears out, causing its vital functions to be affected.

This symptom will not be easily noticed. You may accidentally come across it when you open the hood to fill coolant into the radiator, or you may notice it after the other two symptoms appear. If the seal on the engine mounts loosens, the engine will begin to shake and vibrate violently. This movement can become even more violent if you press the gas and try to accelerate. The torque generated by the engine will further destroy the engine mounts, forcing you to make repairs as soon as possible.

If you open the hood and see that the engine is tilted to one side, it may sign that one engine mount is broken. Remember that some engines are fitted tilted from the factory to be sure of this symptom, you can google your car and the model to find pictures of how it should look like.

If your engine jumps at idle when you open your hood, it can be because of bad motor mounts. Just remember that a jumping engine on idle can mean many things, and it’s not sure that it is because of a bad engine mount, but it can be a sign of it.

What is a Motor Mount?

The engine is the heart of a car, and without it, a car is completely useless. To keep the car’s heart in place, you need strong connections that won’t let the engine fall to the ground. These connections are called engine mounts, and they are responsible for keeping the engine firmly in place.

Motor mounts come in all shapes and sizes, but they all have the same task: to prevent engine vibrations from spreading to the rest of the car. For this reason, engine mounts are made from a combination of metal and rubber. The metal is responsible for withstanding the engine’s weight and keeping it in place even when the engine is exerting extreme torque.

On the other hand, the rubber part is responsible for reducing the vibrations that can occur elsewhere. After understanding the functions of an engine mount, it should be clear that some symptoms can occur due to engine mount failure.

The engine mounts are located on each side of the engine and most often a third one on the opposite side to reduce the engine’s twisting on acceleration.

You often have to look from under the car to find them because they are most often installed on the engine’s bottom but can be in the top in some rear cases.

Remember that the cost of repair is directly proportional to the make and model of your car and the availability of the part.

Your mechanic has to lift the engine with a pulley and chain and keep it lifted while he inspects and replaces the motor mount. Even with such a small thing as an inspection, your mechanic must lift your car and look under the engine mount. Given the nature of this operation, the mechanic will ask you for a lot of money for most car models.

The main symptoms of a bad motor mount include: