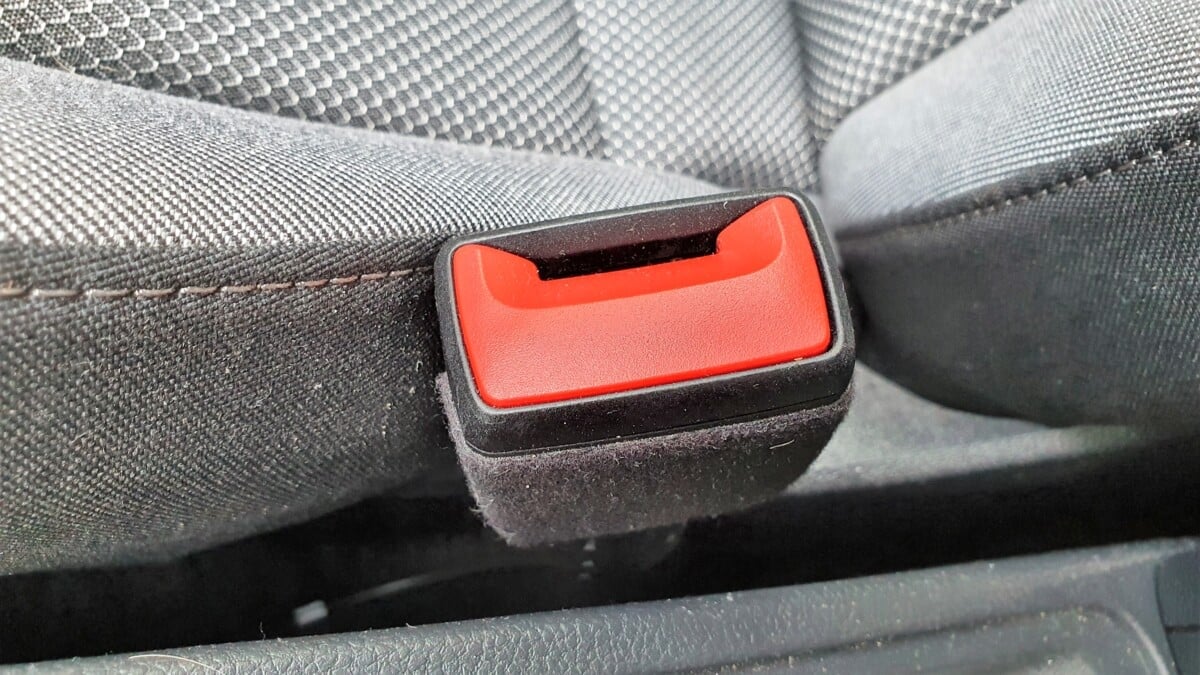 Fixing the seat belt buckle is as simple as inspecting it, opening it to see if anything is damaged inside and putting it back together. If these steps don’t work, you have no choice but to replace the buckle for your on-road protection.

With just a few basic tools, you can have your buckle fixed. We review the steps for you to follow and also discuss the fundamentals of the seat belt buckle.

You may not need to do anything with the belt but simply examine it. If there is something stuck on the belt, it’s possible to remove it and restore the original function. The seat belt is in a location where dirt, grime and debris can easily build up over time.

If you see something stuck to the tongue, you might be able to pry it off without taking any other steps. Products such as Goo Gone work well when the substance is extra sticky.

If there is nothing on the male part of the buckle, it’s time to look inside the mechanism. Something could have found its way into the casing and gotten stuck inside.

You can take a butter knife or other object and gently stick it inside the buckle. Additionally, compressed air can be shot into the buckle to get the debris out. If the object is large, you might need to move on to the next step.

You should also try some WD-40 or any other lubricant in the seat belt buckle.

To get a closer look, you must take the female end of the buckle off of the seat. In some cases, this simply requires you to unscrew the buckle, while other models may force you to take off the seat.

You can find the directions for your vehicle in your service manual. Either way, it’s the easiest way to get inside of the buckle itself.

Once the buckle is removed from the seat, you will notice a socket located between the edges. To dismantle it, you must remove all of the screws. With the edge of a screwdriver, you can pry it apart.

If there are no screws to remove, you can simply pry it apart. However, you want to be gentle or you could damage some of the internal components.

Once the buckle is open, you should be able to see all of the internal mechanisms. Not only will you see how the push button works, but there will also be a cam and springs. Push down on the button to see what happens next. If you notice anything blocking the movement, you should be able to remove it easily now.

However, there’s also the chance that the buckle isn’t working because of old parts. While you could rebuild the buckle, we recommend moving onto the last step instead.

Some people enjoy tinkering around with things such as broken seat belt buckles but the repair can be time-consuming. While there are kits out there to rebuild the seat belt, it makes more sense just to replace it.

You might also consider replacing the entire seat belt since the rest of it is also probably worn. Replacement seat belt kits tend to cost between $25 and $100 for the parts. If you can put it on yourself, there’s no need to pay any additional labor, which could add $100 to $200 onto your bill.

What is the Seat Belt Buckle?

The buckle is the part of the seat belt that releases and secures the tongue. The tongue is located at the end of the belt’s webbing material and it fits perfectly within the buckle.

When the buckle operates as it should, the tongue is held firmly in place. There should be a minimal amount of effort required to fasten or unfasten the seat belt.

The above steps were written with the assumption that the seat belt had been released from the buckle. However, there are times when you might find yourself stuck in the seat belt, making it even harder to perform a repair.

In this case, you will want to spray a lubricant, such as WD-40, into the seat belt buckle opening. Shake it around a little bit to let the lubricant settle inside on top of the mechanical components. After a few minutes, try pushing the button again to release the buckle.

If this doesn’t work, you can always apply more lubricant and an extra dose of pressure. Once it is removed, you want to generously lube the inside of the mechanism. Put the seat belt in and out of the buckle several times to make sure it is working correctly.

If the buckle hasn’t been released at this point, you only have two more options. Ideally, you will want to pull the seat belt out from the retractor far enough that you can wiggle your way out of it. Otherwise, you need to use a seatbelt cutter to free yourself from its grip. However, this option means you will need to replace the seat belt.