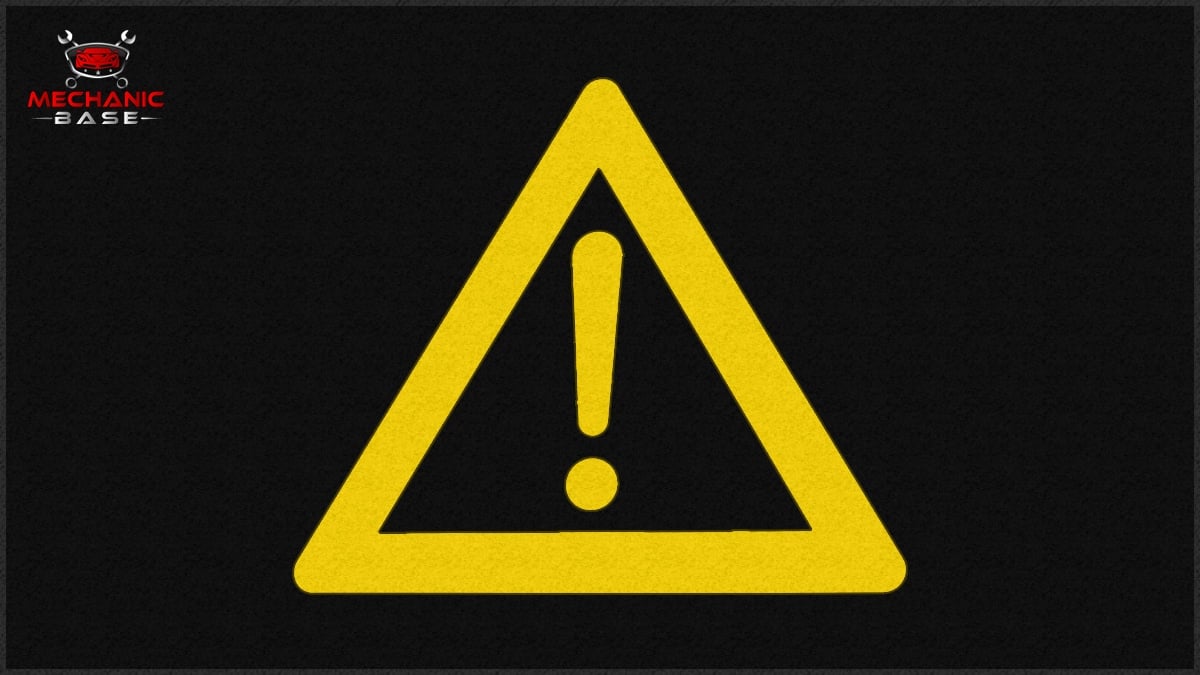 On a typical car dashboard, there are a lot of warning lights that tell you when something is wrong. One of these is the triangle with an exclamation point. What does it mean and how does it get fixed? It’s time to clear up the confusion once and for all.

In this guide, we cover the meaning of a triangle with an exclamation point, so you don’t have to wonder. We also discuss what causes it and show you how to fix it, even if you aren’t mechanically inclined. At the end of this article, we offer answers to some of your top questions, giving you the accurate information you need.

What Does A Triangle With Exclamation Point Symbol Mean?

The triangle with an exclamation point warning light has different meanings with varying automakers. It could indicate a Critical Warning Message is available, telling you to look for other warnings. With Honda models, it also means there’s a problem with the vehicle stability assist (VSA) system.

The triangle with the exclamation point can be either red or yellow, depending on what brand it is. The color of the warning has nothing to do with the severity of the problem. In most cases, this light also comes on solid. It’s not normally known to flash, as some other warning lights can.

Causes Of A Triangle With Exclamation Mark

The triangle warning light can be a catch-all alert or can show you problems with a specific system, depending on what type of car you drive. To understand what it means for your vehicle, you should check the owner’s manual. In some cases, it has to do with the traction control, stability control, VSA or brake system. Here are a few possibilities.

With some vehicles, the exclamation point can indicate a problem with the traction control or stability control systems. You may also see a warning light that shows a car with squiggly road lines beneath it. It resembles a car driving on slippery road surfaces.

In some cases, these lights simply show that the traction control system has been turned off. In other situations, it shows that there’s a malfunction that needs to be repaired.

It’s important to note that the traction control and stability control lights can illuminate for a minute under normal conditions. If the light comes on and goes off, it probably means that traction was lost for a short time and regained. This happens when driving on slippery road conditions and it’s no cause for alarm. In fact, this flashing indicates that the system is working just as it was designed.

Honda vehicles have Vehicle Stability Assist that can malfunction. When it does, you may see the exclamation point and another warning light that simply says, “VSA.”

Again, these lights could indicate that the system is turned off. Other times, there’s a problem that needs to be resolved. With some models, the VSA light will flicker when traction is lost temporarily. It’s only when the light is on solid that you need to troubleshoot the problem.

Should VSA Be On or Off?

If you drive a car with Vehicle Stability Assist, you may wonder whether it should be on or off. After all, the manufacturer has provided a button to turn the system off. When should this be used?

In most conditions, you should never turn off the Vehicle Stability Assist (VSA) system. It’s meant to be enabled in most driving conditions. The only time that it could benefit you to turn it off could be if the vehicle is stuck in the snow. If you can’t get the wheels to move in snowy situations, temporarily turn it off and see if that helps.

When it’s turned off, the VSA light and the exclamation point will illuminate. These warnings should go away once you turn the system back on.

If the exclamation point comes on along with a brake warning, the car could have low fluid. Without the right amount of brake fluid, it becomes harder to stop the vehicle quickly.

In rare cases, it could indicate that the brake pads are worn or there’s another fault with the system. A quick look in the service manual should help indicate what the combination of warning lights means for your vehicle.

With the majority of vehicles, the exclamation point is used to warn of other problems. It’s designed to get your attention, either to the dashboard where other lights are or the infotainment system for an important message.

One would think that the warning lights or message alone would be enough to indicate a problem. However, automakers felt that a second warning was needed to get drivers’ attention.

How To Fix An Triangle With Exclamation Point Symbol

It’s not too difficult to figure out what’s going on with the exclamation point symbol. In many cases, mechanical experience isn’t even required. Here are some steps to consider.

1. Check the Meaning in the Owner’s Manual

Because the exclamation point can mean varying issues, it’s important to figure out how your automaker intended it. Start by looking in the owner’s manual to get clarification.

If you can’t get enough information from the owner’s manual, the service manual should provide more documentation. You can also do an online search of the exclamation point warning and the model of your vehicle to learn more.

When the exclamation point comes on with other warning lights, your code scanner might be helpful. Plug your compatible code scanner into the OBD-II port and read the codes.

Some trouble codes are manufacturer-specific, while others are generic. The code will be a combination of letters and numbers, resembling something like P0300. You can research the code in our DTC online library or look it up on the internet.

If there’s a brake warning light on at the same time, start by checking the brake fluid. Open the reservoir and see where the fluid is in relation to the min and max fill lines.

If the fluid isn’t between these lines, you need to add more fluid. If the fluid looks contaminated, you may also consider performing a flush. This service is usually done every two years or 30,000 miles. Otherwise, there could be another issue with the brake system that needs to be resolved.

Beyond these simple problems, you might be at a loss about what to do. Without advanced mechanical experience, it’s best to visit a local repair shop for further guidance. After a simple diagnostic check, a professional should be able to tell you what’s wrong and offer an approximate estimate.

To find a qualified mechanic in your area, read online reviews and choose a location that’s recommended. You don’t want to automatically choose the establishment that’s the cheapest because they may not perform high-quality repairs.

How Much Does It Cost To Fix A Triangle With Exclamation Point?

It depends on what is causing the problem. If you need to turn the VSA system back on, the fix won’t cost any money. Additionally, adding some brake fluid is a minimal cost compared to other situations. On the flip side, if there’s a malfunction with the traction control or vehicle stability assist, your repair bills could become expensive. For this reason, it’s important to get an accurate diagnosis up front.

Can You Drive With a Triangle With Exclamation Point?

Your car may still drive with the triangle and exclamation point on the dash, but you shouldn’t assume it’s safe. Instead, figure out what’s causing the alert to determine if it’s safe. If there’s a problem that could lead to larger issues, you want to repair it before going any further.

What Does a Red Triangle With Exclamation Point Mean?

Some car manufacturers use a red triangle with an exclamation point to alert you to other warnings. Look at the dashboard or infotainment system to see if there are any other messages. The red color doesn’t mean anything in particular, other than that’s the preference of the manufacturer.

What Does a Yellow Triangle With Exclamation Point Mean?

Some car manufacturers prefer to use the yellow triangle with an exclamation point to alert you to other warnings. Look at the dashboard or infotainment system to see if there are any other messages. The yellow color doesn’t point to a problem in particular and isn’t different from a red one, other than that’s the preference of the automaker.

At the first sign of a triangle with an exclamation point on your car’s dashboard, you need to go into investigative mode. Look around on the dashboard to determine if another warning light is on or read the infotainment screen to see if a message has appeared. Use this information to reference the owner’s manual to figure out what’s going on.

While the alert may be nothing to worry about, you should always diagnose it promptly. In the rare occurrence that something major is wrong, you want to fix it before larger problems occur. With all of the warning lights turned off on the dashboard, you know your car is running just as it should.