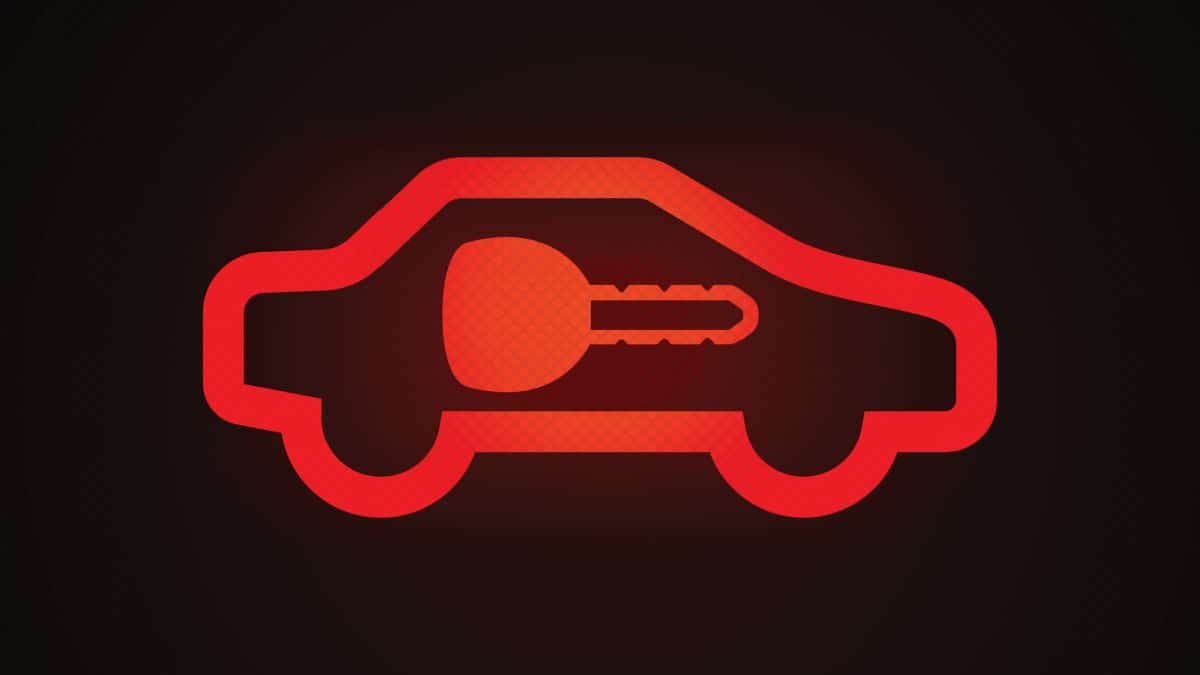 In this guide, we evaluate the meaning of the car with lock symbol. We show you the top causes of the warning and give you some tips that will help fix it. At the end of our article, we have a few answers to your top questions, so you gain a better understanding of your vehicle.

What Does A Car With Lock Symbol Mean?

The car showing a lock symbol indicates that the security system is activated. This system is designed to enhance security and prevent theft from occurring. If someone tries to steal the car or open the doors without the key, the car and lock symbol can start flashing on the dashboard.

With that said, there are also times when the system activates, and theft isn’t occurring. For this reason, it’s important to walk through a complete diagnostic procedure to figure out what’s wrong.

The most common cause of a car with lock symbol is a bad key fob or low battery in the key fob. It can also be due to low battery voltage in the car, a faulty immobilizer, bad door lock or attempted theft.

Here is a more detailed list of the causes of a car with lock symbol.

The most common reason for a car with lock symbol is a faulty key fob or a dead battery in the fob. Your car’s key fob is designed to lock and unlock the doors. In some cases, it can also start the engine through the way of a proximity key or if it has a remote start feature.

However, if something happens to the key fob, either because of a low key fob battery or a damaged unit, it could interfere with the security system. In some cases, you would notice these problems happening slowly before the key fob stops working entirely.

RELATED: Keyless Remote Battery Low: What To Do & How To Replace Battery

A weak or dying car battery can lead to the same situation. Without a strong signal, the key memory could be lost, even if it is right next to the car. When the system can’t read the key fob, it will assume that someone is trying to steal the car.

Other electrical problems can lead to a similar outcome. For example, if the fuse goes out, it will act the same as if the battery were dead.

The immobilizer is a system of its own. While unlikely, there’s always a chance that there’s a fault within the system itself.

Because the immobilizer runs on sensors, any failure could lead to the warning light. Once damage occurs, the proper disable code won’t be received and the car with lock symbol will remain on.

The other part of the equation is the key lock. If the lock becomes damaged or you attempt to use the wrong key, the anti-theft system is going to activate.

To prevent theft, the immobilizer turns on and the car with lock symbol comes on the dashboard. While the system is sophisticated, it can’t easily tell the difference between forced entry and a broken door lock.

There’s always the possibility that someone tried to steal the vehicle. Whether someone tried to jimmy the lock and ignition or they attempted to use a different key, the system is working as it was intended.

As soon as the attempted theft is recognized, the immobilizer is meant to prevent the car from starting. With this system, the car won’t be able to be stolen easily.

How to Fix Car With Lock Symbol

To fix a car with lock symbol, you want to replace the battery in your key fob and inspect the car locks. Then you should try your spare key fob, if you see the same issue, you know there is an issue with the original key fob.

Considering the most likely cause of your problem is either the key fob or the lock, it’s important to begin the inspection here. Check the key fob battery, as these only last a few years at a time. If you can’t use the key fob to unlock or lock the doors, it’s worth replacing the battery. Most batteries only cost around $5.

If the key fob doesn’t work after replacing the battery, it may be damaged. You need to have it replaced. The cost for a new key fob can vary based on what it’s used for. If it doesn’t need to be reprogrammed by the dealer, you may only spend $50 online to get a new one. However, the cost can quickly become more than $200 if the dealership is your only option. You may also need to program it to the immobilizer, which only a locksmith or the dealership can do.

RELATED: How Much Does It Cost To Replace A Car Key?

Finally, an inspection of the ignition cylinder must be examined. If someone tried to break in and mess with the ignition, it could be damaged. This is what happens when a thief attempts to jam a screwdriver into the lock cylinder. Sadly, you will probably need to replace the ignition to fix this problem.

Take a look at your car key next. If it’s damaged, the system might think you are trying to break in. You can try a spare key in the lock to see if that fixes the problem. If so, you might need a new key.

Not all modern cars use a physical key anymore, so this step might be skippable. If you only use the key fob system and a proximity key, this step doesn’t apply to you.

If the battery isn’t charged fully, the same problems can occur. Start by unplugging the battery terminals to perform a reset and charge the car battery. After ten minutes, you can reconnect the battery to see if that fixes the problem. However, doing this will also reset the electronics, including your clock and radio presets.

If that doesn’t fix the car with a lock symbol, it might be time to see if the battery is dying. If so, replace the battery to resolve the problem.

4. Attempt to Start the Car

The car probably won’t start while the car and lock symbol are on the dashboard. For this reason, you must first attempt to turn off the light before you can start it.

Put the key in the ignition and see if the light begins to flash. Once the car doesn’t start, you can switch the ignition back off and wait a few minutes. If the security system stops flashing, it has disabled itself and you can try to start the vehicle once again.

5. Use a Physical Key

If you have a physical key that can be used on the doors, try this method to reset the system. Some key fobs contain a hidden key that can be pulled out for a time such as this.

Insert the key into the door and attempt to unlock it. Don’t open the door if it unlocks. Instead, leave the door unlocked for about a minute. In this minute, the security system should recognize that you are using the right key and disable it.

You can also attempt locking and unlocking the door several times. This method can cause a reset that disables the system.

The car immobilizer uses a fuse to run the electrical connection. Fuses are not bulletproof, so there’s always the chance that it needs to be replaced.

Find the proper fuse to check by looking at the diagram in your service manual. You also need to make sure that the fuse is the same amperage as the one you are replacing.

If the above steps haven’t brought you to a resolution, it’s time to seek professional guidance. If the trouble seems to revolve around the lock or key, you might do better to reach out to a locksmith.

Otherwise, diagnostics should be performed by a qualified mechanic. If there’s a malfunction with the immobilizer itself, you may not be experienced enough to handle the repair.

What Does the Car and Lock Symbol Mean?

Today’s vehicles have an anti-theft system that keeps people from stealing your car. When the dash light of a car with a lock comes on, it means that the security system is enabled. It will usually flash once it is activated but can often be turned off by resolving the issue.

How Do I Get My Car Out of Anti-Theft Mode?

If you can get into the car, put the key into the ignition. Turn it to the ON position and leave it there for a few minutes. You can also perform the same procedure with the actual car lock, by unlocking it but by leaving the door closed. Both of these methods can reset the anti-theft mode if there’s not an underlying problem.

What Triggers Anti-Theft in a Car?

The anti-theft system activates when someone tries to take your vehicle. It can happen from using a screwdriver in the ignition or attempting to use a foreign key. However, mechanical malfunctions can also lead to a false activation of the system.

Can Anti-Theft Cause Car Not to Start?

Once the anti-theft system is activated, you might not be able to start the car engine. You need to reset the system and get the anti-theft light to go off before the engine starts. If the system doesn’t reset, you have to resolve whatever mechanical malfunction is leading to the fault.

What Happens When a Car is Immobilized?

The immobilizer is an electronic device meant to keep the vehicle from starting if theft might be possible. It shuts down the ability to start the engine if the wrong key or key fob is used with the vehicle. Once the threat is resolved, the immobilizer disables, allowing the engine to start normally.

In most cases, when you see a car with a lock symbol on the car’s dashboard, it means that the immobilizer does not recognize your car key signal. When this occurs, you will not be able to start the vehicle. This is often caused by a low battery charge or a bad key fob.

If you are dealing with a car and a lock symbol on the dashboard, you need to figure out what’s going wrong. Once theft can be ruled out, you need to start diagnosing the problem, so you can get your engine started again. Thankfully, most problems are not difficult to figure out and fix.