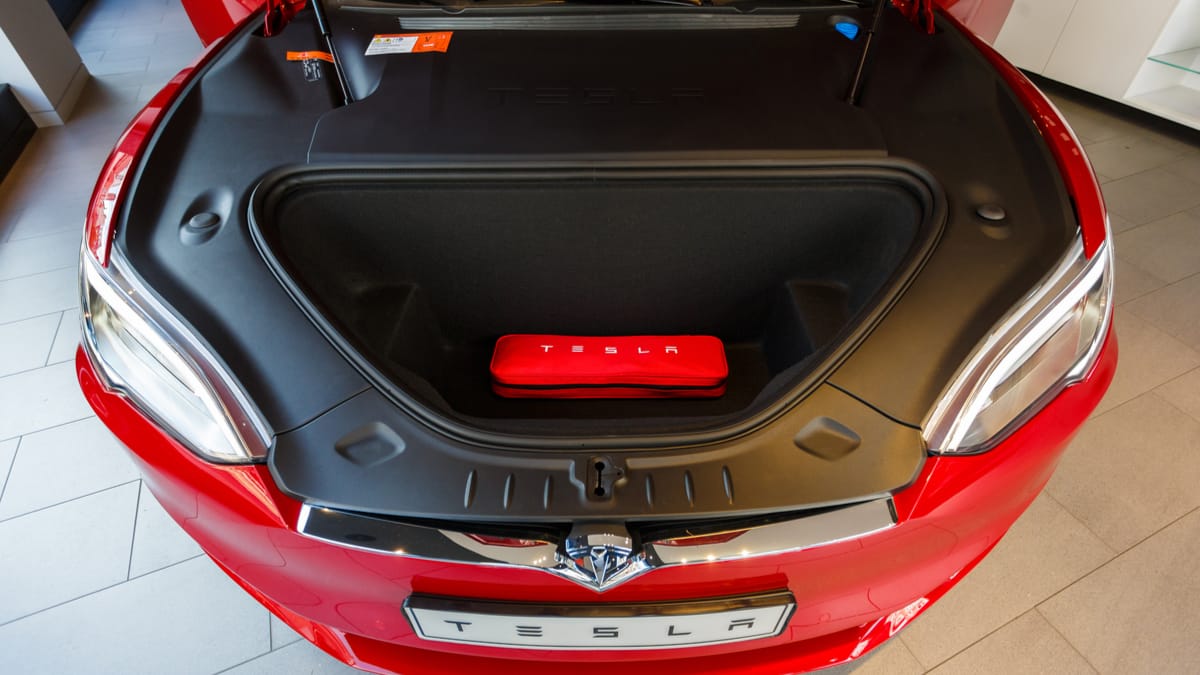 Tesla is one of the most known electric vehicles on the road and the company has been around since 2003. But, have you ever wondered how the Tesla runs? For example, do Teslas have engines? How is this electric vehicle configured?

In this guide, we look closer at the type of engine that Teslas have. Our review goes on to cover whether the Tesla lineup includes a typical transmission. We also examine the benefits of using the AC motor.

Table Of Contents show
Do Teslas Have Engines?
Where is the Tesla Engine?
Do Teslas Have Transmissions?
Benefits of an AC Motor?
1. Increased Torque
2. More Efficiency
3. Compact Size
Tesla vs. Hybrids

Do Teslas Have Engines?

Yes, Teslas have engines, but they don’t have a traditional internal combustion engine. They are made with electric motors that use rechargeable batteries. While traditional cars have one engine, Tesla vehicles can have up to four electric motors.

To charge a Tesla vehicle, it must be plugged into an appropriate connector. The time it takes to charge your Tesla will depend on what model you drive and what type of charger you use.

While the Tesla looks like an average car, it’s not built anything like what you are used to. Instead, there’s an entirely different configuration found in these electric cars.

Where is the Tesla Engine?

If you’ve ever looked under the hood of a Tesla, you know that there’s no engine underneath. Additionally, you aren’t going to hear the traditional sounds of a combustion engine. With a gas- or diesel-powered motor, you hear plenty of noise and you know there’s an engine running, but that’s not the case with Tesla EVs.

Under the hood of the Tesla, you find additional cargo space because there’s no engine to make room for. While the Tesla car won’t have a gas-powered engine, it is powered by an electric motor or multiple that are powered by rechargeable batteries.

There is a motor located on each axle that’s being powered. If you own a rear-wheel drive Tesla, the motor sits on the rear axle, so it can power it. Front-wheel-drive models have one on the front axle. Additionally, the all-wheel-drive Tesla contains a motor on both axles to power all of the wheels.

Do Teslas Have Transmissions?

Tesla EVs don’t contain a traditional transmission. Instead, the electric motor takes the input from you to start spinning. The design allows for instantaneous torque sent directly to the car’s wheels.

With a Tesla, all of the movement happens immediately when you push down the accelerator pedal. The Tesla EV and many other models rely on a single-speed automatic transmission. This setup is needed to take the torque coming out of the electric motor and apply it to each of the appropriate wheels.

Without a gas-powered engine, the Tesla can also accelerate quicker than the majority of cars on the road. That’s due in part to the electric motor configuration. While the top speed might not be comparable in the Tesla models, you are going to get off the line faster in these EVs than you would your traditional gas-powered car. All of that is thanks to the instant torque you receive from the simple transmission combined with the electric motor.

What’s interesting about the Tesla electric motors is that they are AC motors instead of DC. AC stands for alternating current versus DC, which stands for direct current. So, why does Tesla choose to use AC motors over the DC option? Let’s take a closer look at the benefits.

Benefits of an AC Motor?

We’ve already discussed how much instant torque you can receive from a Tesla. However, you might not realize how much more it produces as well.

With an AC motor, you can get greater torque ratings compared to an engine that would be a comparable size. With this additional power, you can go faster and push forward from the start much faster than the average gas-powered car.

When you drive an electric car, you are always thinking about how to make the ride more efficient. After all, when the ride wastes precious range, you are stuck looking for a charger and taking a break sooner than you had planned.

That’s why it’s great that Tesla uses AC motors. These are more efficient, allowing you to save miles. Plus, the AC motor generates steady output amounts that increase stability when traveling at higher speeds.

The size of the AC motor compared to the power is much better than what you will find with the DC motor. For this reason, you can reduce the weight of a Tesla significantly with an AC motor.

With the weight lower, there’s less strain on the efficiency too. Plus, less room is needed to place the motor, which is also a benefit.

Many people confuse the Tesla EV with a hybrid vehicle, but they are not the same thing. In fact, Tesla vehicles have no gas-powered engine at all, whereas the hybrid does. Sure, the hybrid can be plugged in with compatible models, but this only helps gain a small amount of range to offset the gas-powered motor.

You won’t be able to drive hundreds of miles on battery power with a hybrid, mainly because there’s not enough space to add all of the necessary equipment with the standard motor and transmission in place. Instead, the hybrid is meant to provide electric-only power over shorter distances, making it a great option for driving in an urban area.

Additionally, hybrid models can be made in multiple formats. You can choose a model that doesn’t get plugged in or one that does. There are also many more hybrids on the roads right now than electric cars, although that is going to continue shifting in the future as more automakers invest in EV technology.