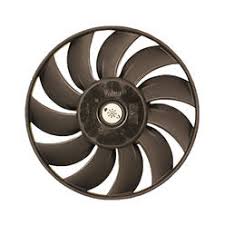 It is an important component in an air conditioning system that acts as a heat exchanger that dissipates the heat, as opposed to a radiator whose job is to absorb the heat from the engine coolant and continue to release the heat to the atmosphere to keep the engine running cool.

What is an AC Condenser?

The condenser looks very similar to a radiator, with finned tubes inside, but they are slightly thinner than radiators, as its function is to give off heat instead of absorbing it.

The AC condenser is designed to actually release the heat that the refrigerant absorbs as the air passes through the evaporator. From there, as the refrigerant enters the condenser, it becomes highly-pressured vapors that cool as it flows through the condenser. This transforms it back into a cool high-pressure liquid. Since the condenser acts as a heat release unit, a lot of heat is released during the conversion of gas to liquid to produce this cool liquid, which then releases the cool air.

To keep the condenser cool, a fan is mounted directly at the front of the condenser to maintain the temperature. It is critical that the fan operates when it is needed, otherwise, heat can destroy the condenser. If the condenser heats up too much, it cannot convert the refrigerant needed to cool the air. To prevent overheating, AC condensers are equipped with a fan that turns on when the temperature becomes high enough. Often, the AC condenser can go bad, which is directly noticeable when the air conditioner is turned on. Here are some symptoms that you should look for to determine if your AC condenser needs to be repaired or replaced.

Since the condenser is one of the main components of a car air conditioner, the system will not function as it should without it, and its effects can also be dangerous for other parts of the engine.

The air isn’t cooled when AC is turned on

This is the first and most important sign to look for. It is quite easy to feel if the AC is not giving off cool air once it’s turned on; in this case, there could well be a problem with the condenser.

The AC gives out warm air

You sense a burning smell when the AC is on

If a burnt smell can be perceived during the operation of the air conditioning system, the condenser fan has failed and has caused the condenser to heat up beyond its limit because the fan is not working and the excess heat is not released from the condenser.

The car overheats when the AC is on

While the air conditioner is running, the temperature needle should be under constant control, as the temperatures often suddenly jump up if the engine is not cooled. Similarly, if the condenser does not give off heat as it should, the engine will absorb that heat, because it’s the engine that keeps the compressor running.

The diagnosis of a bad AC condenser fan is quite simple. You can easily find the AC fan by opening the hood of your car. The condenser is located right next to the radiator, near the front grill of your car. These fans operate automatically. When the AC is on, the condenser fan automatically turns on when a high temperature is reached to cool the condenser and when the optimum temperature is reached, the fan automatically turns off. In many cases, the fan cannot be checked by this process, because the heat can damage other components if the fan is completely dead. Here are some ways you can check if your AC fan is working or not:

SEE NEXT:  How Much Does an A/C Recharge Cost? - Repair Cost

Turn on the AC

After you have switched on the air conditioner, the fan should turn on in a few seconds. Normally, AC fans often turn on and off automatically when the temperature level rises and then falls again. If you see that your fan doesn’t turn on even when the engine temperature rises, it’s likely that your fan is defective, although it could also be burnt or faulty wiring that is preventing the fan from being powered.

Use a Multimeter to check for a signal

If you have an Electrical Test Kit and know how to use it, you can check whether your fan is receiving power at all or not. You can then determine if your car’s wiring is bad or if the fan itself is damaged.

Check for any obstruction near or in the fan

Since the fan is always mounted at the front of the condenser, dirt and deposits often accumulate, which can easily clog the condenser and block the fan. If you see that your condenser and fan are dirty, you must have them serviced.

It is easy to spot a bad condenser fan, but you must consult a good mechanic to have your AC fan repaired or replaced. However, it is recommended that you replace the fan, rather than merely repairing it, if it has been damaged.

Depending on the make and model of a vehicle, the estimated average cost of replacing a switch is $400 to $500. Labor costs can range from $50 to $100. Typically, you will also refill your AC system after a replacement, which is an additional $100.

Search
Related Posts
About Mechanicbase
Mechanicbase is a blog created for all car and automotive lovers. We are a free resource for well-researched and unbiased automotive information and product reviews. We are owned and operated by SellenMedia.
0shares