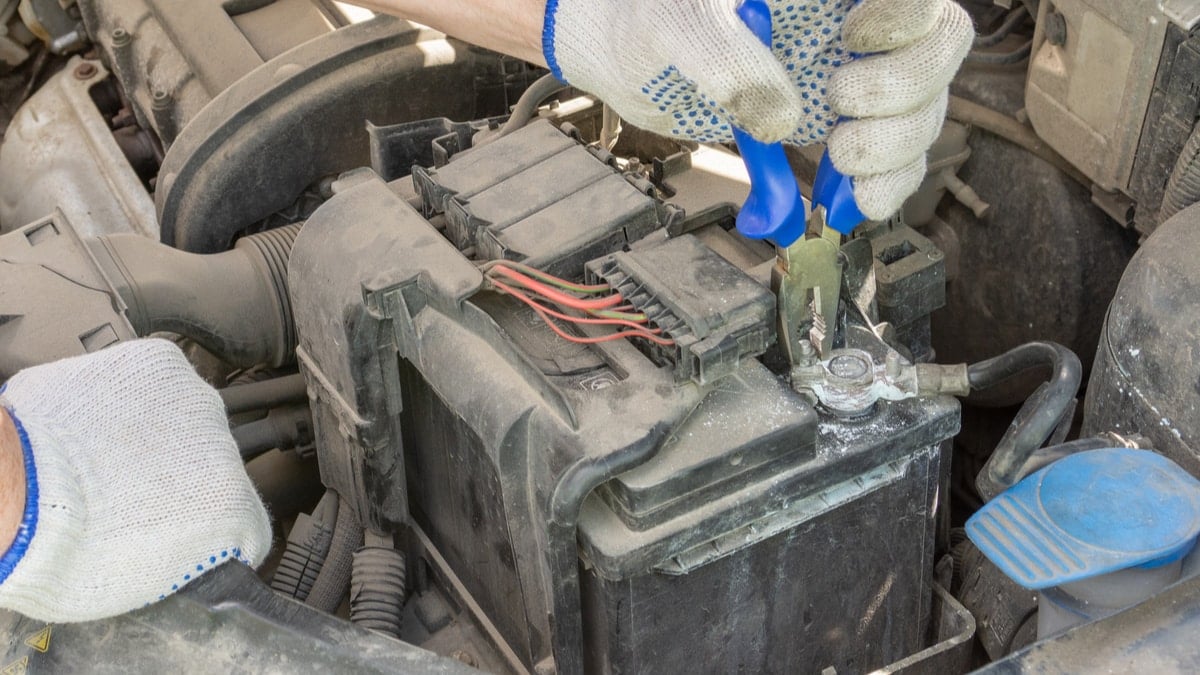 Whether you need to jump start the car or it’s time to replace a battery, you must know the proper way to disconnect and reconnect the cables. Which battery cable should be removed first but installed last? If you don’t get the answer right, you could put yourself in danger.

In this guide, we look closer at the reasons to take the negative cable off first. We also help you identify the two battery cables and describe in-depth why this step is essential.

The battery terminals in your car should be either marked or color-coded. If the terminals are marked, you will see a positive symbol on the positive terminal and a minus sign where the negative terminal is.

There’s also the chance that the caps are color-coded. In this case, red indicates a positive terminal, while the black cap shows you where the negative terminal is. If you are really lucky, your car will include symbols and colors, making it easier to identify.

Which Battery Cable Should Be Removed First?

The negative cable should always be removed first and reconnected last. If you take the positive off first, you could create an electrical short, and there are risks for sparks, especially if anything metal touches the area. You must take proper battery precautions to keep everyone safe.

To disconnect the battery cable, you will need a socket wrench, typically 10mm. It needs to fit on the connector bolt. Turn your wrench counter-clockwise and it should loosen. Just make sure the socket never touches both of the terminals at the same time, or you will create an electrical pathway.

When you remove the negative cable, you want to put it aside. Don’t let it touch the battery or positive terminal.

Which Battery Cable Should Be Reconnected Last?

The negative battery cable should be reconnected last and the positive cable first. When you are putting a new battery in or have finished jump starting it, you have to be careful to reconnect it appropriately. If you follow the steps you took to remove the terminals, you would simply do everything in reverse order.

RELATED: Battery Terminal Corrosion Causes (How to Fix & Prevent It)

If you fail to remove the negative connection from the battery first, you put yourself at risk of an electrical short. As an example, if you were to drop a metal tool on the positive terminal and it also touches anything metal on the vehicle, you could create a circuit.

This problem will short your battery. It can also give you one heck of a shock. That’s why the negative cable should always be the first off and last back on.

However, it’s also just as important that the connectors don’t touch each other or anything else while you have them disconnected. Some people choose to use a plastic zip tie or another item to attach them temporarily somewhere out of the way. Just make sure you don’t let them touch anything made from metal.

Once you are ready to reinstall the connectors, you can remove them from the zip ties. Remember to install the positive cable first and always end with the negative. Give both connectors a strong wiggle to ensure that they are properly seated for the best connection.

Don’t be alarmed if you see a small spark when you put the negative cable back on. This just indicates that you re-established the electrical circuit.

What happens if you disconnect the positive terminal first?

Although disconnecting the positive battery terminal first is possible, this is not wise, as you might damage your vehicle by doing this or even hurt yourself. While undoing the cable lead, you might touch a chassis or other car’s metal parts with a spanner while undoing the cable leads. Because the negative battery cable is still connected, this creates a short circuit, which may destroy the battery or even damage sensitive electronic components.

Can you just disconnect one battery terminal?

Yes, as long as you disconnect the negative cable. By doing so, you’ll effectively cut off the car’s whole electrical system from its source of electricity. And this is absolutely needed when working around sensitive electronics such as sensors or control units. However, ensure the disconnected cable doesn’t fall on the battery terminal while working on the car. This is best done by zip-tying it to a nearby piece of plastic trim or a similar non-metal object.

Why do you connect the positive terminal first?

Is it OK to just disconnect the positive terminal?

No, it is not OK to just disconnect the positive terminal, nor it’s wise to do this first when removing the battery. This is because a piece of metal, such as a wrench, that accidentally bridges the battery post and chassis’ metal parts would cause a short circuit. The result of this would be a dead battery and possibly fried electronics. In addition, a sudden burst of electricity may give you an electric shock or cause a battery explosion.

Disconnecting the battery may seem like a simple job – you just undo the terminals and remove the cables. There is, however, only one correct way of doing this, and that’s by removing the negative terminal first. This will prevent electrical short circuits if you accidentally bridge the positive terminal and the chassis with a wrench.

So, when disconnecting the battery, you first have to determine which of its terminals is a negative one accurately. Do this by looking for a minus (-) mark on the battery’s top side. You also need a suitable socket or wrench, which, for most cars, will be 10 mils.

Once the cables are off the battery, you should prevent them from swinging around or touching one another. The easiest way of doing this is by zip-tying them for something. Lastly, reconnecting the battery should be done in reverse order. This means connecting the positive cable first and tightening its clamp before hooking up the negative one.