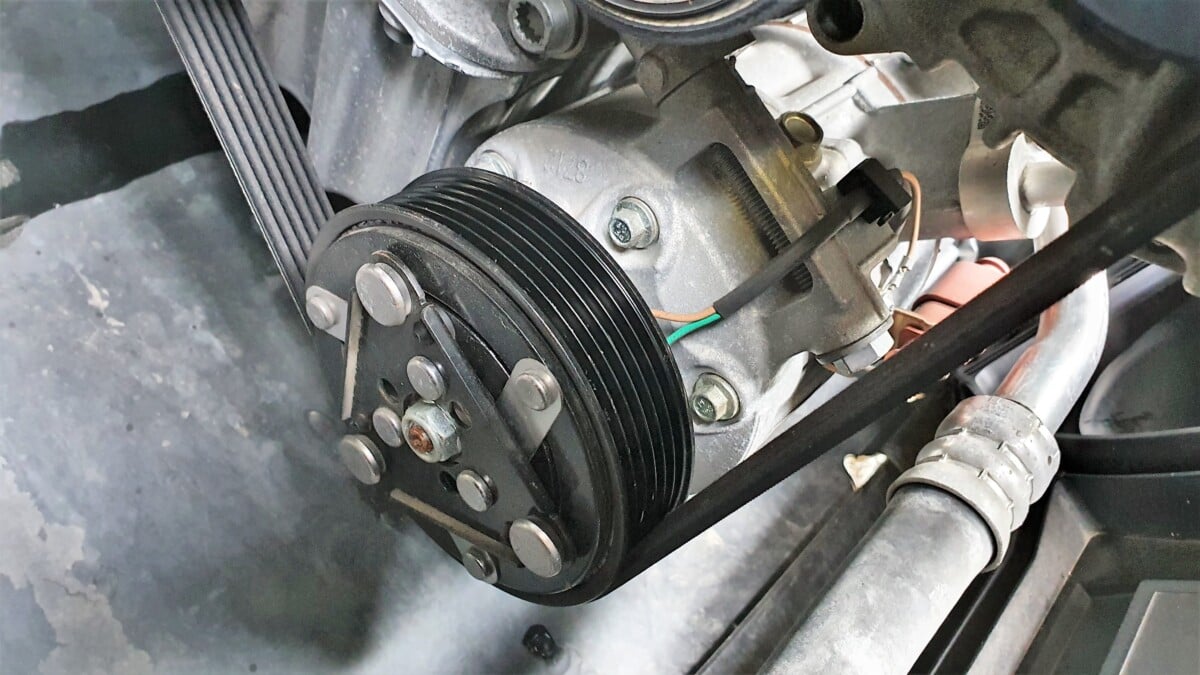 When the car AC doesn’t work as it should, you could be dealing with several issues. However, it’s essential not to overlook the possibility that you have a bad AC compressor clutch.

With so many moving parts of the compressor, it can be difficult to determine which one went bad, but it’s possible to narrow down the clutch. Let’s take a quick look at the most common signs to look out for.

The most common symptom of a bad AC compressor clutch is a non-functional or intermittent air condition system. You can also notice loud noises coming from the engine when the clutch is engaging and disengaging all the time.

As you can see, there are quite many ways to tell it’s bad, so let’s go a little bit more into detail. Here is a more detailed list of the 5 most common symptoms of a bad ac compressor clutch.

The most common sign of all bad ac compressor clutch symptoms is a higher cabin temperature than usually during hot days when you need the A/C.

Anytime the cabin temperature rises unexpectedly, you can often look at a defective compressor. A damaged clutch causes the compressor to malfunction, as it becomes unable to regulate the refrigerant flow.

Of course, the higher cabin temperature could also be related to a lack of refrigerant, so it’s important to properly diagnose the system.

If you turn the AC on and hear a loud noise, it could be a b is failing. Just like the engine, the compressor contains several moving parts.

If the clutch or other moving part starts to fail or seize, noises are a common complaint. However, a worn-out or leaking bearing can also create a high-pitched squealing sound. On the other hand, a seized bearing is going to create a grinding noise.

Because it is so difficult to determine what part inside the compressor has gone bad, it’s often best to replace the entire compressor than attempt a repair.

The clutch allows the compressor pulley to engage or disengage from the motor, ensuring it is only running when it should. If the clutch seizes, normal action cannot continue.

Look at the front of the compressor while the air conditioning is running to see if the clutch is spinning.

4. Inability to Turn Air On or Off

With the clutch broken, the compressor could remain activated, making it impossible to turn off the air conditioning. This isn’t good for the other AC components and could lead to bigger problems.

However, it’s much more common for the clutch to break and make it impossible to turn on the air instead. Without the clutch, the compressor doesn’t receive any power from the engine, so you are left without air conditioning.

Look at the compressor to see if there are any signs liquid is leaking out through the front seal.

The AC compressor clutch is found in front of the compressor. When you turn the air conditioning on, the clutch engages and spins during normal operation.

To find the AC compressor, look at the front of the engine where the other belt-driven accessories are found.

The Function of an AC Compressor Clutch

The AC compressor clutch is responsible for converting energy from the engine and delivering it to the compressor. When you turn on the air conditioning, the clutch engages and begins spinning to transfer the power.

The compressor clutch also keeps the air conditioning from running constantly. If it ran all the time, you would notice a decrease in fuel economy and have worn-out air conditioning components more often. It would also cause excessive strain on the engine.

It doesn’t take long to figure out the AC compressor clutch is bad and you only need a few simple tools.

Take a look at the AC compressor clutch. You might need a flashlight to see it well. Most of the time that the clutch fails, you will see discoloration or a burnt area.

The clutch disc moves along flexible rubber isolators that allow it to move. When the heat becomes intense, it starts to melt, leaving a rusty color. When this happens, you must replace the entire compressor.

You will need a wire crimp tool because the connectors are small. Route the wires to the car battery. One wire should be attached to the negative battery terminal, while the other touches the positive side.

If your electromagnet is good, the compressor clutch will kick on. Remove the positive wire to release the clutch. You can repeat this process several times to ensure the clutch is working as it should.

Every time you activate the clutch, you should hear it engage. If this doesn’t work as planned, the compressor might have a defective magnet, requiring replacement.

Because the compressor is one of the main parts of the air conditioning system, it is an expensive part, probably the most costly of the entire system. However, it isn’t difficult to replace.

If you plan to continue driving your vehicle, replacing the AC compressor is a no-brainer decision. However, you don’t want to take shortcuts and replace just the clutch, just to find out down the road that another part is bad and you need a new compressor anyway.