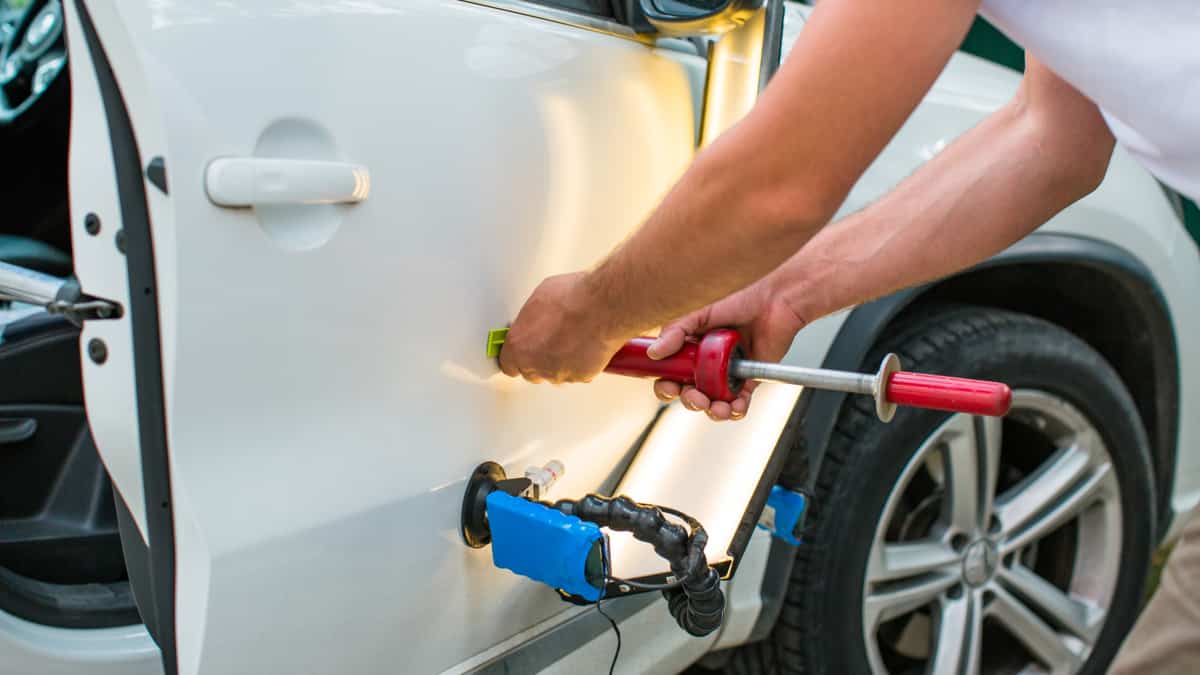 Whether it’s caused by hail or an impact, you want to have car dents removed immediately before further damage occurs. Still, many people are scared to find out the car dent removal and repair cost, fearing that it is going to break the bank.

In this guide, we evaluate the reasons the cost fluctuates. We also analyze a few at-home dent removal remedies that might help you save money.

How Much Does It Cost to Repair a Car Dent?

For a small dent, you might pay $50 to $95 to have it removed. The larger the dent is and the more work that must be performed will both cause the price to go higher. In severe cases, you could spend $300 to $1,500 or more. However, several factors play into how high the repair cost becomes.

If there is a dent the size of a quarter or less on the car, you are going to spend the least amount of money. This dent could have occurred from hail or another impact, but it shouldn’t require a lot of labor.

Most technicians can repair the smaller dent with PDR as long as they have the right equipment. At most body shops, this dent is going to cost $50 to $95 to repair.

The moderate dent will measure ½-inch to 2-inches big. These can also be caused by hail in a more severe storm. They are also caused by golf balls and other objects.

Sadly, a lot of these might not be repairable with PDR. If that’s the case, expect to spend $500 to $2,000 for each dent, depending on the location and type of paint required.

If a big object has hit the vehicle, you might be looking at expensive repairs. Baseballs and shopping carts can leave deep dents that require a lot of manual labor to remove.

Depending on the part affected, it might be best to replace it. For example, you would be better off replacing many bumpers instead of trying to repair them. On the other hand, repairing a dent in a body line could cost several thousands of dollars.

The larger the dent is, the more it will cost to fix. The main reason comes down to the way it needs to be repaired.

On average, you can expect to spend about $50 to $95 for a smaller dent. It goes up substantially if the dents are larger and need more comprehensive repair.

This seems like an obvious factor, but many people don’t consider the effect it has on the price. If you have one dent that needs to be fixed, you can spend less than $100 if it is small.

However, the price jumps up accordingly if there is more than one dent. That’s why hail damage can get so expensive to repair.

If you have a small dent, the body shop might be able to use Paintless Dent Repair (PDR). This low-cost method doesn’t require sanding the body, re-painting or drying, making it inexpensive and fast. Instead, the body is reshaped back to its original beauty.

If the dent is too large, PDR won’t be an option. For this repair, the area must be sanded, painted and dried, so a qualified technician is needed. You could easily spend $2,000 if the dents are large. In some cases, it might be best to replace the panel entirely. You can even get a new bumper for many cars without spending more than $500 to $750.

RELATED: How Much Does It Cost To Paint A Car?

If the dent is located on a body line, it’s going to be much more complicated to fix. Ideally, you hope that the dent is found on a flat surface, which is much easier to fix.

Additionally, if the damage is too bad, it might not be repairable. In some areas, it’s best to replace the part completely to make it look its best.

Even with the smallest dent, some cars can be quite expensive to fix. For starters, the paint needed could be a specialty kind that causes the price to rise significantly.

Additionally, the car’s construction could increase the price as well. If it’s made from steel or aluminum, you could be looking at a higher cost.

You could easily save some money on the dent repair by visiting a smaller, less-known body shop. These technicians might not have a lot of experience, so you get what you pay for.

However, it’s often better to go with a reputable body shop, especially if you hope to avoid overspray, color mismatching, sagging paint and other imperfections. With that said, if you are driving an older car with other body issues, it could make sense to go with the cheaper option just to get the blemish looking better.

If you are only dealing with a small dent, you might be able to remove it at home with a special plunger. Don’t use your toilet plunger, but purchase one specifically designed for this auto body task. It can remove dents in almost any spot on the car.

To use the plunger, put some water on the affected area and the plunger surface. Gently push and pull the plunger until you are able to remove the dent. If done correctly, the car body should look like new without causing any more damage.

You don’t need any special tools with this handy method. You can boil some water in your teapot or electric kettle to remove small dents in the car body. Just make sure you are safe or you could get burned.

Carefully pour some of the boiling water onto the dented surface. Before the surface is able to cool down, you want to pop it out from the other side. This task can be difficult if you can’t easily access the other side. However, it almost always works on dents that aren’t too large.

You may also be able to get the dent worked out with the help of dry ice. The dry ice can help the body contract back into place. Just make sure you take precautions to keep the dry ice from your exposed skin or it can cause serious injuries.

Hold the dry ice on the dent. You might need to rub it around slightly until that dent decides to pop back into its original shape.

If you are having trouble with the other methods, you want to give the compressed air and hairdryer method a try. Turn on the hairdryer to its hottest setting. Heat up the dent to make it more malleable.

Once you have the surface hot, it will have expanded. You can now spray the can of compressed air onto the dent. The cold air coming out of the can will cause the surface to contract so the dent can be retracted.  Just be careful so you won’t burn the paint.

If it’s a larger dent, you want to get help from a professional though.