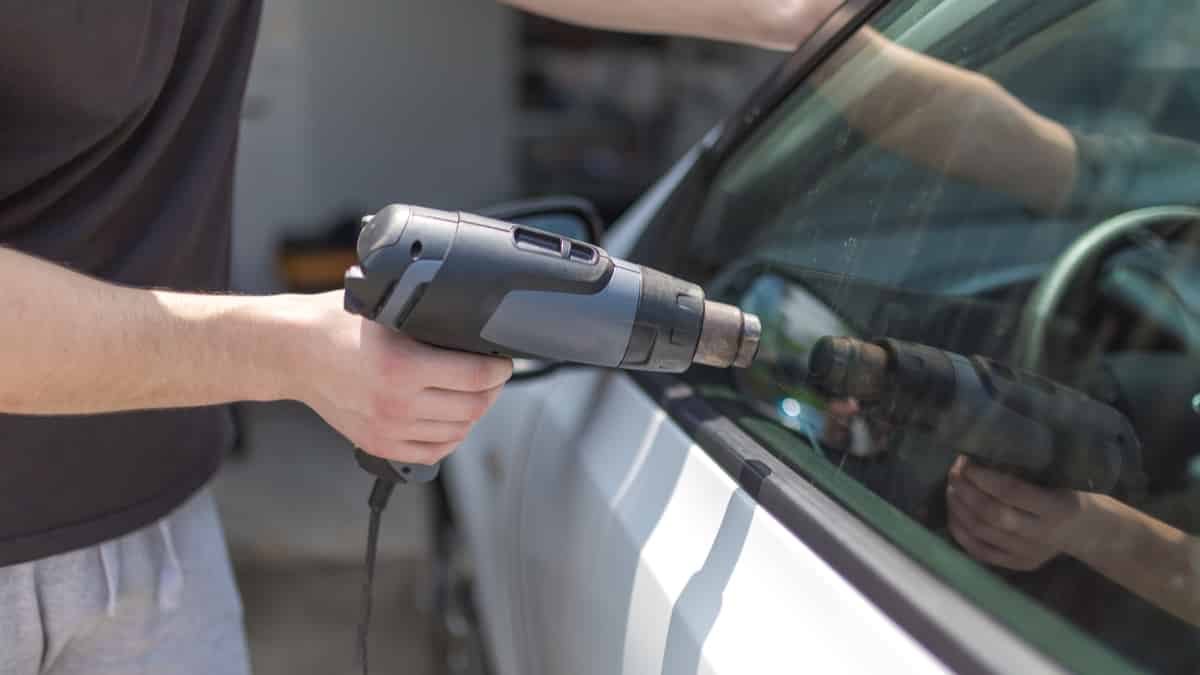 Tinted windows on your car can be great for various reasons. They provide a much cooler cabin, privacy, and it usually makes your car look much better.

Unfortunately, window tint has a lifespan, and sometimes you need to replace it. But how do you remove it without damaging the window or making a mess?

In this article, we will talk about the reasons for removing the window tint film, four different methods to remove it, and how to remove excessive glue afterward.

4 Reasons to remove your window tint

There may be many different reasons you want to remove your car window glue, and it’s now always because it’s getting old. Here are 4 common reasons why you would like to remove it.

The most common reason you would want to remove the window film is because of bubbles or other film damage. With time, sun, heat, and cold the film will start to come loose after some time and cause bubbles and other damages.

There could also be a reason that you don’t want tinted windows anymore. Maybe you think your car’s cabin gets too dark while driving in the night, or you do not like the look of it.

In many countries, it is actually not legal to have tinted windows, especially the front windows. Maybe you got stopped by the police or have a yearly inspection that needs you to remove the window tint.

After some years, especially if you have a cheaper window film installed, the film will get discolored and look bad. You will often notice this by the film is turning to a blue, green, or red color, which is especially visible in the sun.

RELATED: How to remove paint from your car?

4 Methods of How to Remove Window Tint

So let’s get on how actually to remove the film when you decided to remove it.

You can use four different methods to remove the film, and some are better than others. However, it is your decision which method feels suitable for you.

The first and best method, if you ask me, is to use heat, then remove the film. This is a very straightforward method, and it will not leave any glue left behind if you do it properly.

Just peel up a small corner in the film and pull it easily; heat the film with the heat gun or hairdryer until the glue loosens up, and the film starts to getting pulled off the window with just a small amount of pressure.

It is recommended to heat from the outside of the window, which will make the glue to melt before the film. If you melt directly on the film, it may stretch the film when you pull, and you will get the film in several pieces instead of one.

Be careful, so you do not burn yourself, though, and not overheat the window, as it can actually damage or crack the window.

The same basic does actually apply here, except that we will do it without a heat gun.

As you may know, your car can be super-hot when it has been standing in the sun for a while. If you do not own or do not want to spend money on buying a heat gun, you can actually use the sun’s heat to do about the same thing.

Just let the car stand in the sun for some hours, then pull the film off the window. This does matter a lot on the film quality. If the film is of really high quality, it may be difficult to remove it with this method and leave a lot of glue behind.

Overall, this method will leave some glue behind, which you will need to remove afterward. How you can remove excess glue, you will find out later in the article.

A pretty unknown method is actually that you can remove it very effectively with a steam cleaner. The heat from the steam will heat the glue, and the steam will make it super easy to remove from the film.

Just pull a small corner of the film and start to steam the film directly at the glue while you gently pull the film. This is a very effective method that will not leave any glue left behind, except that you need a steam cleaner to do it.

Steam cleaners can be pretty expensive, but if you have one at home, you should absolutely use it in this case. I prefer this method before the heat gun method, actually.

The last method here is to use a scraper to remove the film. This will be slower than the other methods, but it is definitely a useful method.

It is recommended to use a scraper and not a knife for this method. Just pull a little corner of the film and start to “cut off” the glue from the window. You can also combine this with the 2nd method of letting your car stand in the sun for a while.

This may leave some glue left behind, though, which should not be a problem though because you already have the scraper to remove the film.

Be careful with the scraper, though, so you won’t press the edge of the scraper against the window, as it may cause scratches in your window, which may be super difficult to remove.

Now, when you removed the film on all windows, you might notice a lot of glue left on the window – depending on the method you were using.

This is totally fine and something we will take care of right now. Here are four different methods you can use to remove the excess glue left on the windows.

The most effective method we found of removing excessive glue is to use the Goo Gone sticker remover. Just apply this on the glue and let it sit for a while, and then scrape the glue off very easily without effort.

You can also scrape off the film without any sticker remover if you have a super sharp scraper. Just make sure that you will not make any scratches on the window, so make sure the scraper is sharp enough and do not press with the edge against the window.

Alcohol does actually solve the window glue and can be a good alternative if you do not want to order and wait for the Goo gone sticker remover. Your 50-year-old whiskey might not be the optimal choice here, but a 90 percent isopropyl alcohol may do the job very well.

Just apply it on the glue and then remove it with a scrape or towel afterward.

Nail polish remover is actually very effective against window tint film glue and often something most people have at home. Just apply it to the window and then take a cloth or something similar to remove it. You can also use a scrape to remove it afterward effectively.