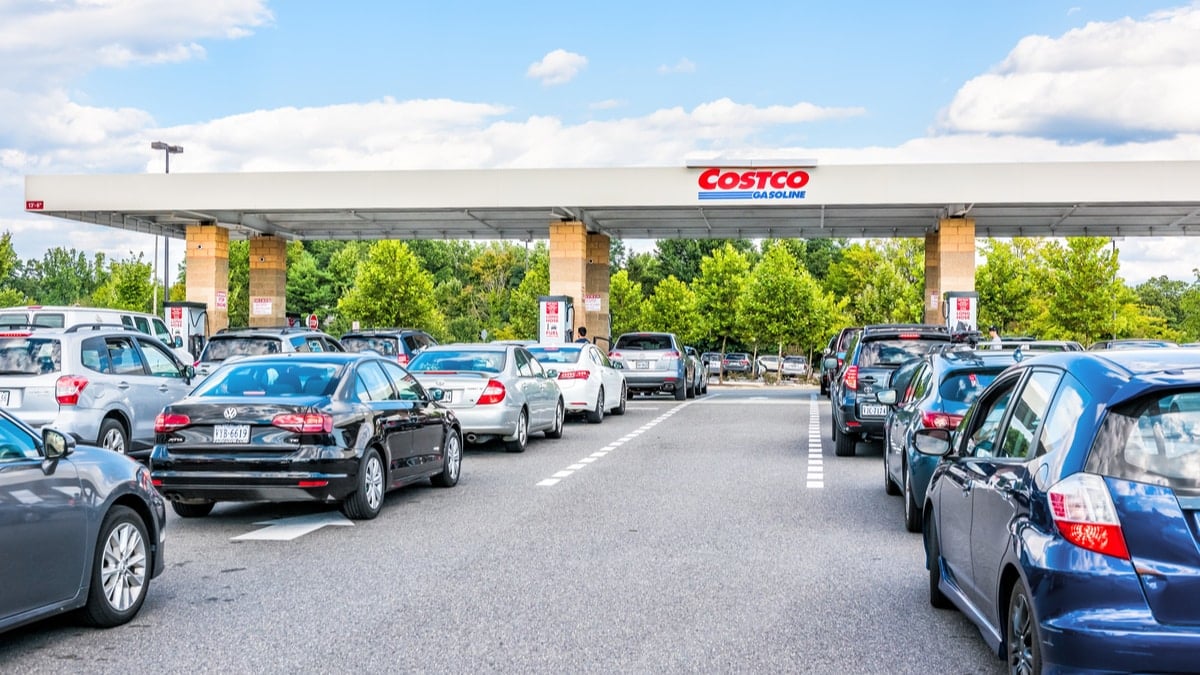 Costco might be home to rotisserie chickens and bulk goods, but the company has also earned a reputation for being the best place to buy fuel.

At any given time, you can find gas prices significantly lower than the rest of the region just by shopping with Costco. But, how does Costco sell gas so cheap, and what is the overall cost?

In this guide, we explain why Costco gas is so cheap. We also look at a few reasons to fill up at Costco and point out a few downsides you might not have thought about.

Table Of Contents show
Why Is Costco Gas So Cheap?
Benefits of Costco Fuel
1. Top Tier
2. Check Prices in App
3. Safety Attendants
4. Diesel
5. Rewards
Downsides of Costco Fuel
1. Long Lines
2. No Cash
3. Location
Frequently Asked Questions
Do you need a Costco card to buy gas?
Can you buy fuel at Costco without a membership?
Is Costco gas worth it?
Is Costco gas really cheaper?
What is the best day to buy gas at Costco?
Can I use someone else’s Costco card for gas?
How Do You Save On Costco Gas?
What is the cheapest day to buy gas at Costco?
Conclusion: Costco Gas Prices

Why Is Costco Gas So Cheap?

Costco gas is cheap because of the volume they are selling, and it’s used to attract customers into the store to buy higher-margin items when becoming a customer. With Costco selling gasoline at an average of 20 cents a gallon below the regional average, it seems unusual that the company makes a profit.

Costco fuel tends to be even lower than Walmart and Sam’s Club in many regions, with averages hitting 20 cents lower than expected. However, an analysis of how much revenue these low prices bring the company shows why it’s a good marketing tactic.

When you fill up at Costco, you probably head into the store to grab a few things while you are there. While the company is happy for you to buy some snacks, a new shirt, and giant jars of pickles, the real hope is that you grab that new couch you see or upgrade your television.

Annually, Costco sells about $20 billion of fuel, making up about 10% of the total sales. While it’s a low-margin commodity, there’s no lack of volume happening at the pumps. In fact, one Costco location can easily sell a million gallons of fuel in a month, where the average gas station pumps out 80,000 gallons.

Additionally, Shell, Exxon and other notorious gas stations tend to be independently owned. Because of this structure, they can’t afford to lower prices to match Costco. These retailers need to make a decent amount of money on the fuel that’s being sold, unlike Costco, who can make it up in retail products.

One would think that Costco skimps on the quality to keep the prices low, but that’s not the case. As with all of the Kirkland products in the store, the gasoline is of the highest quality.

In fact, Costco uses top tier fuel, which means it meets a certain standard. It contains special additives that clean the engine and reduce buildup. Top tier fuel is known for improving engine performance, maximizing fuel economy and protecting the internal components of the motor.

Most people agree that getting high-quality gas is important, but no one wants to pay more than necessary. While everyone knows Costco sells some of the lowest-price gas, you want to be able to compare pricing.

Thankfully, the Costco app allows you to do that. Before you make a trip to Costco, you can check the prices to see how they compare. You can also get other important information, such as the hours of the store.

When you visit a regular gas station, there’s nobody standing by, ensuring your safety. However, that’s exactly what Costco provides to its customers every day. The Costco safety-certified attendants are trained to run the show.

They can offer assistance if you are having trouble pumping fuel and they also keep the area clean. Most importantly, they understand how to run the fuel station, so it complies with environmental and safety regulations. This peace of mind is worth its weight in gold.

Costco doesn’t just offer top tier gasoline but also has diesel at the pumps. If you drive a pickup, you can save money on your fuel as well. The Kirkland Signature diesel is just as premium as the gasoline.

Costco assures that the diesel fuel prevents wear to the engine and improves combustion for an easier start-up. It is also created to clean out the engine and protect the fuel system.

On top of that, Costco diesel is designed to ensure a clean operation of the injectors. That’s why it has also earned the prestigious status of Top Tier.

There are many perks to shopping with Costco in general, but having the Anywhere Visa Card by Citi makes shopping with this store even better. This credit card offers 2% back on all Costco and Costco.com purchases.

What makes it truly special is what is received when you use it for fuel. Not only can you take advantage of the super low gas prices, but this card also gives you 4% cashback. You can earn up to $7,000 each year.

If you’ve ever been to the Costco fuel pump during rush hour, you know how long the lines can get. Sometimes, all of the cars won’t even fit into the area.

If you are in a hurry, the savings might not pay off for you, especially if waiting might make you late for work. Additionally, you won’t want to wait longer than necessary if the gas light is on and you’re about to run out of fuel.

While the majority of people rely on paying with plastic these days, there are still some that prefer cash. Costco only accepts debit cards, Visa credit cards and Costco cash cards. You won’t be able to pay cash at these pumps.

If you are one of the people that need to walk cash inside to the attendant and watch the gas pump rise slowly at the end, getting fuel at Costco won’t make you happy. You can head to the local gas station or run inside and buy a Costco cash card instead.

Costco locations don’t tend to be situated close to one another. These stores don’t oversaturate the market like Walmart and Sam’s Club.

Because of this, there may not be a Costco gas station close to you. Is it worth driving an hour to save 20 cents a gallon? Probably not, especially if your vehicle isn’t fuel-efficient. For this reason, you might only fill up at the Costco gas station when you are already in the area.

Do you need a Costco card to buy gas?

Yes, you must be a member and have a valid Costco membership card to purchase gas at Costco gas stations. To become a member, you can go to Costco’s website to be able to use their low-cost gas stations.

Can you buy fuel at Costco without a membership?

No, it is not possible to purchase fuel without a valid membership card at Costco gas stations. Go to Costco’s website to apply for a membership to use CostCo’s gas stations.

Is Costco gas worth it?

Yes in most cases Costco is worth it. However, to use their gas stations you have to pay a membership fee. But if you drive a lot and live near a Costco gas station, it could definitely be worth it. If you don’t drive much at all, you need to think about the membership fee and figure out if it’s worth it in your case.

Yes, Costco gas is cheaper than other gas stations in most cases. However, you must become a member to use their gas stations and you must pay a membership fee. If you drive a lot and live near a Costco gas station, you can definitely save a lot of money.

What is the best day to buy gas at Costco?

Weekdays between 10 and 11 AM are definitely the best time to buy gas at Costco if you don’t want to waste a lot of time standing in line. This is mainly because on the weekends there can be very long queues at Costco gas stations due to the low price.

Can I use someone else’s Costco card for gas?

It’s technically possible to use someone else’s Costco card for gas, but it’s not recommended because it’s against the rules. If a Costco employee checks the card, it can lead to serious problems.

How Do You Save On Costco Gas?

To save even more money on Costco gas, you can use their Visa card and get 4% cashback on your gas purchase. This VISA card and the discount will also work at all gas stations. Visit Costco’s website for more detailed information before getting the card.

What is the cheapest day to buy gas at Costco?

Historically, Monday and Sunday are the cheapest days to buy gas. However, this is not always the case and therefore, there are no fixed cheaper days every week. Therefore, if you want to save gas, it is better to check the gas price in real time on their website.

The gas prices at Costco vary based on the region where they are located. However, we can look at a few locations to give you an idea of what you would pay.

For example, if you look in the Dallas, TX area (Rockwall), you see that the lowest price gas aside from Costco can be found at RaceTrac for $2.96 a gallon. However, the local Costco is currently selling it for $2.64 a gallon. That’s a 32 cent savings.

Additionally, if you look in San Diego, CA, you can see that Costco is selling fuel right now for $4.09 a gallon. In comparison, the Pilot has it currently priced at $4.35, giving you a 26 cent difference. Either way, you are saving a good amount of money by shopping with Costco.