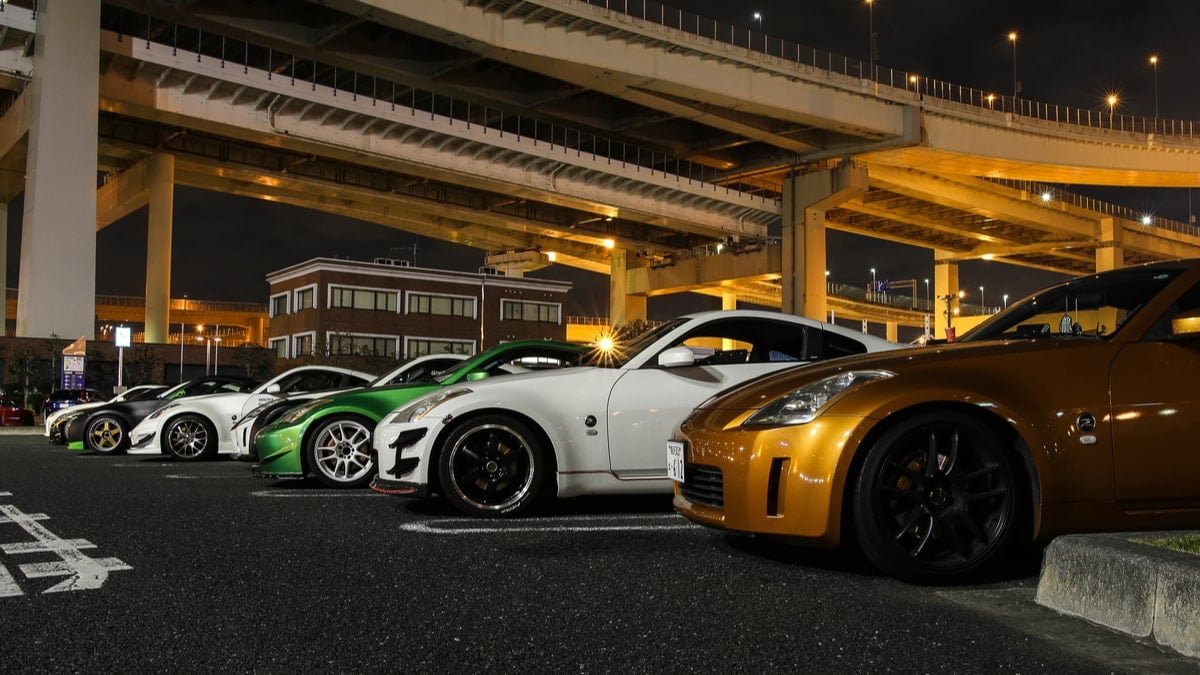 As you’re surfing the net and exploring discussions on used cars, you might keep coming across a particular acronym and wonder what it’s all about – JDM.

JDM stands for the Japanese Domestic Market, and is actually one of the most unique and perhaps undervalued areas of used car buying and selling.

But what’s so interesting and special about JDM cars? Why all the fascination surrounding them? These questions and others we will try to answer in today’s blog all about the amazing world of Japanese Domestic Model vehicles.

What Does JDM Mean?

JDM stands for Japanese Domestic Market, and it refers to cars that are initially manufactured with the intention of being sold exclusively in Japan’s home market. In other words, they are not export models.

Why such a distinction? Well, western drivers take for granted that many factors behind European and North American car production are in alignment, with the exception of gas mileage where European expectations are much higher.

When it comes to Japanese Vs. European/North American expectations, however, it’s like looking at 2 completely different worlds. The Japanese market is driven much more by technological innovation and the integration of new technologies, whereas western markets are more forgiving of this aspect, instead favoring cars that will last a long time and can be used dependably for up to a decade or so.

Some may argue that some emerging technologies like AR navigation is helping to narrow that gap, with many young western buyers more enamored with technological upgrades than previous generations.

However, the overall difference remains. Japanese car owners are much more likely and willing to change a car after a shorter time if it means getting the latest technological thing.

This forces Japanese OEMs to move more aggressively to get these tech items integrated and working in JDM models, even if it’s not 100 percent perfect yet.

The Japanese model of switching cars more frequently often leaves a huge surplus of vehicles that the companies have nothing else to do with but either sell to overseas buyers, or destroy.

Where Does JDM Demand Come From?

The above explains the supply of JDM cars, but where does the demand come from? The first factor that explains JDM demand is the uniqueness of the vehicles. Some JDM models are a unique and invariably better version of an export model.

For instance, fans of the sporty Subaru Impreza models in the UK were chasing JDM models for their more powerful engines and better performance capabilities. The UK export models were compared to castrated animals in their lack of power and performance.

Another factor is a need for affordable fleet vehicles. Countries like the Philippines, for example, are not as cash rich as China and don’t have a strong domestic manufacturing base for commercial vehicles like trucks.

Buying new models from China is expensive, as it is from Japan, but JDM surplus models, on the other hand, are very affordable and readily available. Popular models have included the Isuzu Elf, Isuzu Giga, the Mitsubishi Canter, the Hino Profia…the list goes on. Never heard of these? That’s because they’re JDM models.

Finally, there is the existence of the so-called “JDM Culture” which refers to those who import JDM cars in order to take advantage of their modification potential, or to stand out massively from the crowd with a car that perhaps no one else has in their neighborhood, perhaps even their county or state. We’ll explore both of these ideas in more depth below.

Where Do JDM Models Find the Most Popularity?

Looking purely at statistics, one has to acknowledge that New Zealand is perhaps the greatest fan of JDM vehicles. In New Zealand, around 60 percent of registered on-road vehicles originate from overseas markets.

Among these imports, a staggering 94 percent of them are Japanese models. In real terms, the nation imported some 134,800 JDM vehicles between 2015 and 2019. Popular models in New Zealand include (but are not limited to):

Two more categories that find a lot of popularity are the high-performance sports cars and “Kei” cars, which we’ll look at further below. Outside of New Zealand, JDM has also found great popularity in the UK, Canada and Australia. With the exception of Canada, there’s something that joins together the Japanese, New Zealander, British and Australian markets — they all drive on the left-hand side of the road.

With right-hand drive cars being common to all these countries (meaning the wheel is on the right-hand side of the passenger cabin), as well as having a more permissive import culture, it’s relatively easy to bring in JDM cars to these markets.

Some are bought at auction by independent car dealerships, fixed up and then sold on for profit. The uniqueness of the models makes them very attractive to the right sorts of buyers.

Further above, we mentioned the popularity of performance models and so-called “kei” cars in the JDM sphere. As for performance cars, models such as the Toyota MR2, Toyota Supra, Subaru Impreza, Nissan R34 GTR, Nissan Skyline, Nissan 180SX and others are all among popular choices.

Very often, these cars are not imported to use as street cars either because they’re too problematic to register and insure, or because they’re just plain illegal due to lack of safety features.

Arguably the most famous example of a banned model is the Nissan Skyline GT-R, which is banned in the US because it doesn’t meet the requirements of the Imported Vehicle Safety Compliance Act of 1988.

Some models like the Mazda MX5, Toyota MR2 and whatnot are used as street-legal cars, and are imported for their unique specifications compared to export versions of the same car. Above we mentioned UK enthusiasts who wanted to get their hands on JDM Subaru Impreza/WRX models over UK models because they offer different specifications such as AVCs, more engine horsepower, different transmission, bigger injectors, better brakes…and the list goes on.

It’s not that Subaru is trying to make the car “lesser” when exporting, but rather they have to make it cost effective for an overseas market, which explains the many differences. Purchasing used JDM models, however, allows UK buyers to get the specs they want — or the potential specs if they’re going to mod and tune — without spending more than they would in the UK market. Even better, the car is right-hand drive and ready and aligned for UK roads.

That’s not to say there aren’t still performance limitations on JDM cars. A rule from the Japan Automobile Manufacturers Association (JAMA) created voluntary restraints on speed capabilities on many JDM cars, with speedometers and top speeds only going up to 111.8-mpg (180 km/h).

What about “kei” cars?

These refer to very special and unique compact utility vehicles, usually with very small engines of around 660cc, and a length of no more than 12 feet. Popular models include the Suzuki Jimny, Honda Beat, Daihatsu Copen, Autozam AZ-1 and others. These are utility vehicles built originally for the ultra-compact streets of Tokyo, Osaka and other major cities in Japan. They’re small but reliable, as well as easy to park and fun to drive.

You can see the appeal of a kei car in a country like the Netherlands where space is limited and auto-related expenses high. The smaller engines are efficient but also cheap to insure. On the narrow streets of Amsterdam, they’re also very easy to park! The same goes for London, Paris, Berlin and even Sydney and Melbourne.

JDM Models and the US Market

So what’s the story with JDM and the US? Why isn’t the land of the free awash with JDM vehicles like some of the other countries we’ve mentioned? Well, the US does have a fairly decent market by any standards, but the size is still severely hampered by the existence of regulations that dictate any imported car that doesn’t currently meet US safety standards can only be imported when it reaches the milestone of being 25 years old.

Since many JDM cars don’t technically meet these standards, American enthusiasts are forced to update their potential JDM buys each year by checking which new models become legal with the passing of each calendar year. Assuming the rule won’t change anytime soon, it’s fair to also say that with each year going by, the potential for the JDM market in the US grows with newer and better-built models — thus more lasting — add more mainstream appeal.

In truth, however, the US market will never have the scope of the countries mentioned above with this kind of rule in place, since it places huge limits on available models and makes the chances of finding lower-mileage models, for instance, very difficult.

Conclusion – JDM: A Force for Good?

Opinion on JDM cars remains divided. Some see them as a great alternative to domestic vehicles, offering unique styling and also access to newer technologies but in older models.

For instance, The JDM 2003 Honda Accord came with viable variable cylinder management technology, something that was scrapped in the US after an unsuccessful attempt to use it during the 1980s in Cadillac cars. The tech wasn’t available on export models until 2008.

The main downside with JDM cars are potential speed restrictions — though horsepower limits were already lifted in 2004 — as well as common high mileage. Though Japanese drivers have a lower annual average mileage than Americans by far, JDM cars coming into overseas markets are older and thus still have quite big numbers on the odometer.

For many, however, this just encourages a “hunt” for those models that exhibit the low-mileage, low-cost and high-tech combination that can make JDM so attractive.

As long as there are unique models available, JDM will undoubtedly continue to thrive.

What is the best JDM car?

There is no way to say which JDM car is the best, there are so many to choose from and it comes down to your personal preference. However, the Toyota Supra is one of the best JDM cars if you ask car enthusiasts. It is a classic car that has been around for decades and continues to be popular today. Plus, with its impressive performance and sleek styling, it’s no wonder why so many people consider it one of the best JDM cars out there.

What is the fastest JDM car?

The Nissan GT-R is one of the fastest JDM cars on the market. This sleek and powerful Japanese sports car has a top speed of 196 mph and can go from 0 to 60 mph in just 3.5 seconds. It’s also relatively affordable compared to other high-performance cars, making it a great option for anyone looking for a fast JDM car.

There is no clear consensus on this question, as there are many different factors to consider when it comes to automotive performance. Some people might prefer JDM cars because they believe that the engineering and design behind them is more sophisticated than what you would find in American or European cars. Ultimately, it comes down to personal preference.

Are JDM cars illegal in the US?

All JDM cars are not illegal in the US. There is, however, a 25-year rule for JDM vehicles and this means that any JDM vehicle that is newer than 25 years cannot be driven on the road in the US.