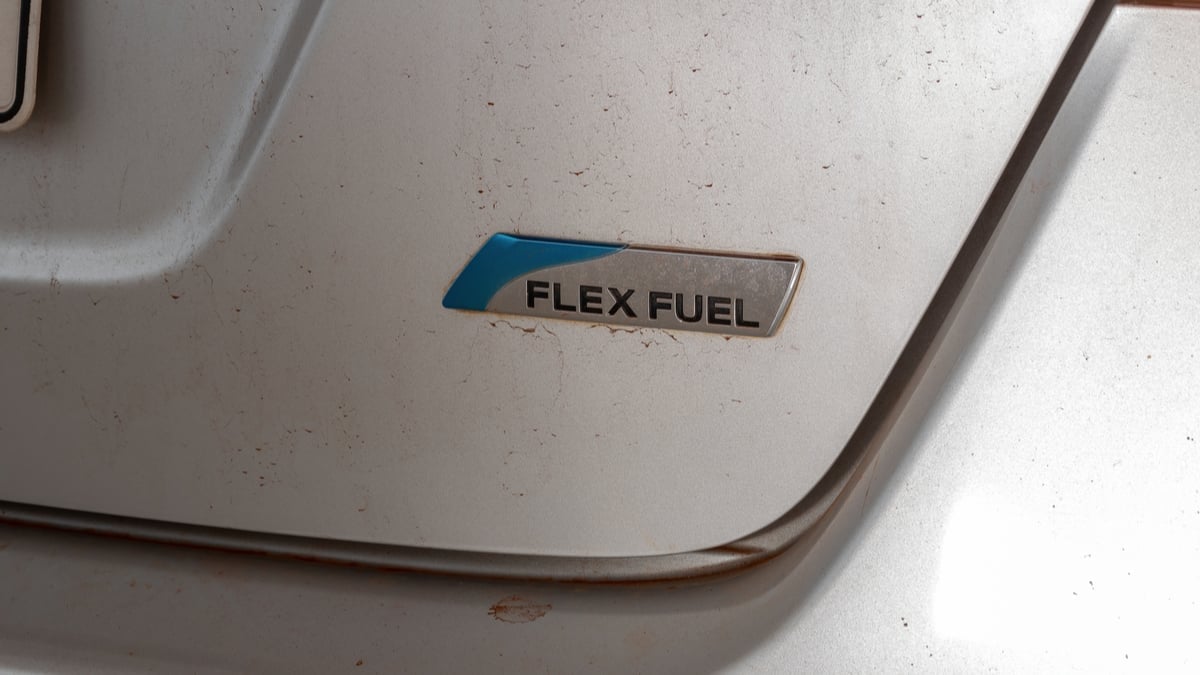 With everyone looking to save money on fuel and explore alternate forms of transportation, the flex fuel vehicle has become more popular. What is a flex-fuel vehicle and how could it benefit you?

In this guide, we explore the purpose of flex fuel and show you what vehicles can use E85. We also discuss both the benefits and disadvantages of this alternative fuel. At the end of our guide, we talk about different blends that contain ethanol and what each one’s purpose is.

What is Flex Fuel?

Flex Fuel typically refers to a flexible fuel vehicle (FFVs). This is a vehicle engine designed to run on multiple fuels. The most common is to run on either E85 or gasoline. E85 is a form of gasoline that’s blended with ethanol.

This ethanol is made from a variety of plants, such as corn. While most gasoline in the U.S. has some ethanol, the E85 formulation is made from a higher percentage.

While most people assume that E85 always contains 85% ethanol, that’s not the case. E85 is an ethanol and gasoline blend that consists of 51 to 85% ethanol. There are variations in the formula based on what season it is and where the distributor is located. E85 that’s sold during winter months usually has lower ethanol levels because of the crops.

Can All Cars Use Flex Fuel?

The only cars capable of using E85 are the ones specifically designated as flex-fuel. These vehicles contain an internal combustion engine that can use either the conventional gas or ethanol blend like E85. The car will contain a special badge on it stating it is a “Flex-Fuel,” “E85” or “FFV.” Without this badge, you wouldn’t want to put E85 in the gas tank.

Another indication that your vehicle is a flex-fuel is if it contains a yellow-colored gas cap. There are also some capless fuel fillers with a yellow ring around them, indicating that E85 could be put into the tank. These vehicles allow you to use any level of ethanol blend, even the conventional form. There are sensors in the flex-fuel vehicle that determine what gas is being used so adjustments can be made automatically. The sophisticated system figures out exactly what fuel injection and timing is required for complete combustion.

If you are still unsure, you can check your owner’s manual to see what fuel is needed. It should indicate what’s best and what can be used. If all else fails, reach out to the dealership where you purchased your car or inquire online with the manufacturer.

READ MORE: Can You Use Regular Gas in a Flex Fuel Vehicle?

Many people are concerned with how gasoline is affecting the environment. Ethanol is cleaner burning for the environment. Because of this, there are fewer toxic fumes being pumped into the atmosphere.

Flex fuel helps to keep the amount of greenhouse gas to a minimum. This environmentally-friendly variant is one that is going to become more popular in the coming years as we all try to do our part to make the world a cleaner home for everyone.

RELATED: The Pros and Cons of Ethanol Fuel

Ethanol is produced by crops that are commonly made in the United States. Most ethanol is made from corn, but it can also be created by cane sugar.

It’s far better to purchase crops that are grown at home versus purchasing oil from foreign countries. All that’s needed to keep making ethanol is more crops.

With the flex-fuel vehicle, you have flexibility, which is where the name comes from. If you are at a gas station that’s offering E85, you can choose to fill up the tank with it.

Otherwise, if the fuel station doesn’t carry E85, you aren’t left without gas. Instead, just fill up with the conventional fuel instead. The setup of the vehicle can adjust the timing and fuel injection to run either one.

The flex-fuel vehicle is built with the latest technology, as seen by the electronic sensors installed. These high-tech advances make it easy for the vehicle to quickly adjust to whatever fuel is being used.

With the flex-fuel vehicle, you can use any ethanol blend, from 10-85%. Your car will then determine how to adjust to this fuel type for the best performance.

If you choose an electric vehicle, you get great tax breaks. However, it isn’t just an EV that provides some tax breaks.

You can also take advantage of a little tax savings with the flex-fuel vehicle. Even a small reduction in your tax obligation will be welcome.

There are arguments either way, so it must be looked at. Some automotive enthusiasts swear that using the alternative fuel can have a positive effect on performance.

There’s no documented loss of performance when filling the tank with E85. Because of the advanced sensors and sophisticated technology, it’s quite possible that you might notice more horsepower and torque as a result.

We discussed how the flex-fuel vehicle uses sustainable fuel because it is created from corn or sugar crops. However, this production is not flawless. There are some issues with creating enough sugar and corn to meet demands.

On top of this, corn can become the victim of diseases that ruin crops. Additionally, bad weather can have a negative effect on how many crops are produced. All of these determine how available the crops are and how much they will cost for production.

Even though the flex fuel engine is more advanced, there are issues that make it less reliable. When you use higher ethanol ratios, the engine will endure more wear.

Ethanol is known for absorbing dirt. With this dirt inside the engine, there will be more corrosion and damage to the motor. For this reason, you can expect it to have a shorter lifespan than your traditional car engine.

We touched earlier on the performance aspects of the flex-fuel vehicle. It’s true that you might get more horsepower and torque, but at what cost? This added power can reduce fuel economy.

The difference isn’t going to be extremely noticeable. Plus, with the cost difference between E85 and conventional gasoline, you should still end up ahead.

Flex fuel still hasn’t made its way to every gas station in the country. There are many regions and stations that don’t carry it at all. Unless you are in the Midwest, you might not ever see a station with E85. However, that should change in future years, but this upgrade requires a significant investment into fuel stations and the infrastructure.

While this number might not look familiar to you, it’s what is commonly used. The majority of gasoline sold in this country contains some percentage of ethanol.

The majority of fuel stations use a 10% ethanol and 90% gasoline ratio. That’s what the E10 is and it’s used in more than 95% of gas-powered vehicles on the road.

This blend has been approved by the EPA. It contains 15% ethanol to 85% gasoline. You can use it in most light-duty models that are 2001 or later.

If you check with the manufacturers of these vehicles, almost all of them will approve the use of E15. You can get more specifications if you read the owner’s manual, but the majority of 2021 and newer models often recommend using this formulation.

You won’t find E25 as readily as some of the others. This blend contains 25% ethanol and 75% gasoline.

For now, E25 is only approved by certain manufacturers. For example, it can be used in some MINI and BMW models.

At the top of the spectrum is the E98 blend. This contains 98% ethanol and virtually no gasoline at all.

Obviously, this blend isn’t meant for on-road use in today’s cars. With that said, it is chosen by some race cars as a popular fuel for performance.

READ MORE: What is Diesel Fuel Gelling? (& How to Prevent it)