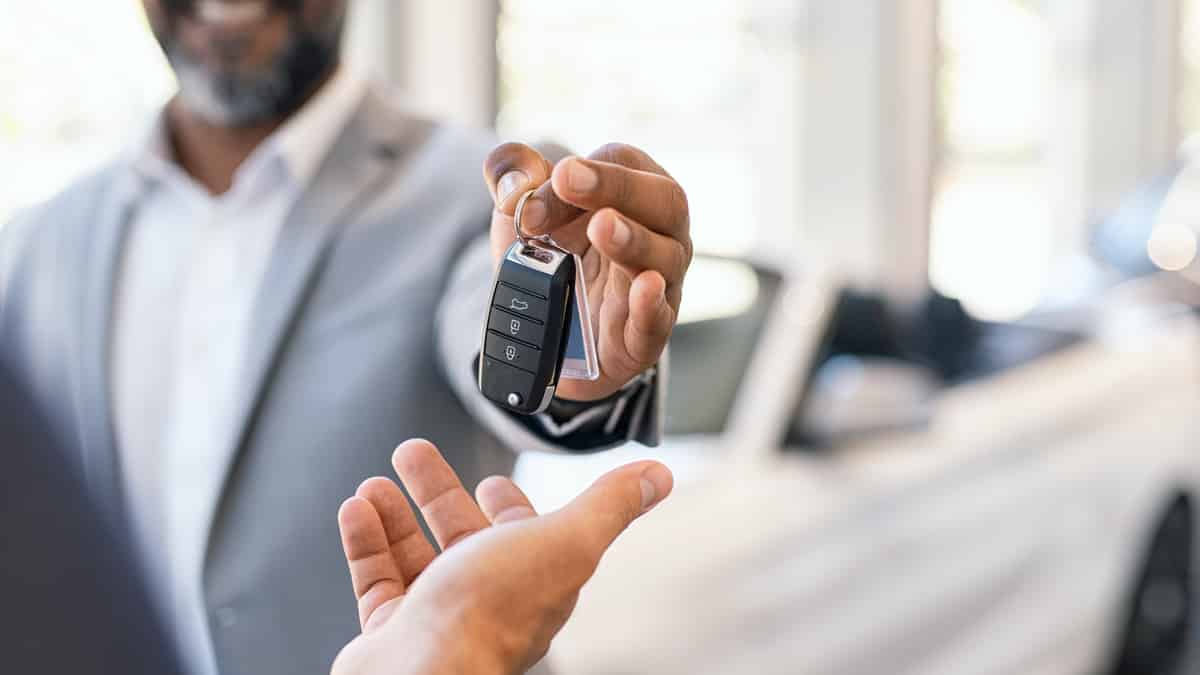 We have so many channels through which to buy cars nowadays and transactions can happen so quickly. You might be looking at a car for sale on Craigslist in the morning, test-driving it at lunchtime, and then making a transfer to purchase the car in the afternoon. To help us navigate the mixed waters of car purchasing online and everywhere else, we are also told of the many “red flags” to look out for when buying pre-owned cars.

One of those red flags is the seller of the vehicle not having a title in-hand. The vehicle’s Certificate of Title (as its full name usually appears in documentation) is the key document that acts as proof of ownership of a vehicle. In the US, just about every state department of motor vehicles advises buyers most stringently to compare the name(s) on the title of the vehicle with those of the identification of the seller(s). If the seller is unable to produce the matching name, then it is advised that you proceed no further.

Is this fair, though? Are there no legitimate reasons a seller might not have their title? Can you still buy the car with no title there? These questions we will be answering in today’s blog.

Contents show
What is a Vehicle’s Title
Why Might a Seller Not Have Their Title?
Steps to Take When There is No Title
1. Get a Vehicle History Report
2. Prepare a Bill of Sale and Pay with a Traceable Method
3. Get a Replacement Title
4. Track Down the Original Title
5. Get a Surety Title Bond
Conclusion: Avoid, but Don’t Exclude

What is a Vehicle’s Title

To reiterate what we mentioned in the introduction, a vehicle’s title is the legal proof of the vehicle’s actual and legal owner. Whenever you want to do anything with your car like register it, transfer ownership to someone else, get new license plates, etc., the title is the document that the DMV requires to prove your ownership.

There are three main title statuses that can exist: clean, lien, and salvage. Sometimes a seller having a salvage title is a bigger red flag than them not having their supposed clean title. A clean title status means the car is bought and paid for, and has not been in any accidents that rendered it written off by an insurer.

Lien title status means that the current keeper of the vehicle isn’t yet technically the full owner because they haven’t finished paying for the vehicle. The lienholder is most likely a bank, credit union or other financial institution. Sellers are supposed to get a lien release letter before they are able to sell on a clean title.

Salvage title status means the car was totaled in a car accident and declared off the road by an insurance company. Someone has then restored the car and re-registered it, but it can’t come back with a clean title, so instead it gets “Salvage.”

Titles are issued by individual state DMVs, and therefore look very different. The front will be fairly empty, just revealing basic details of the vehicle, including the name of the legal owner of the vehicle. On the back is space for the seller to fill in theirs and your details as part of the title transfer process that happens during a typical private car sale. You would then take this document with your own ID and payment to the DMV to register the car in your own name.

Despite what the many sites and other sources say, warning you against ever buying a car without a title, there is no reason to immediately launch suspicion at the seller. Yes, there is a chance that the reason there is no title is because the car was stolen and you might be about to enter a criminal situation.

On the other hand, there are some very legitimate reasons as to why a buyer doesn’t have their title in hand, and you can still complete the transaction safely using some tried-and-tested methods. First, what reasonable excuse could a car owner have for not having their title in-hand?

In either case, there’s still some cause for suspicion because you have to wonder in the first case why no title was issued subsequently to the car’s importing. In the second case, you have to wonder why the seller has not taken steps to replace the title before they sell the car. It can take some time to get a replacement — up to 90 days in some states when done by mail — but if the seller wanted to do everything right, then why not replace the title and do everything right?

RELATED: How to Safely Sell Your Car

How, then, should you buy a car without a title? We will still argue that it is okay to do so, but only if you use one of the following methods to back you up:

These 5 methods will be discussed in more detail in the next section.

Steps to Take When There is No Title

Above we mentioned the five things to do when purchasing a car with no title. Below, we’ll go into these in a bit more detail.

1. Get a Vehicle History Report

Turn to Carfax or AutoCheck and get yourself a detailed vehicle report. It will cost you $39.99 for a Carfax report and $24.99 for an AutoCheck report. They cover the same essential information with a few differences in approach. The main thing is to determine whether or not the car has been claimed as stolen before. Either report will give you that information.

You can also take the vehicle’s VIN number — that’s etched into the frame, so impossible for the owner to “misplace” — and run it through a check with the DMV. If you can’t get anywhere with the DMV due to confidentiality or other issues, then try putting the number through the National Insurance Crime Bureau to see if it has been stolen.

If the above checks out that the car hasn’t been reported as stolen, then that’s a good sign to move forward. It’s especially alright if the seller also promises to get you the title in due course. Some of the remaining methods below can help with that goal.

RELATED: Carfax Vs. AutoCheck – Which Vehicle History Report is Better?

2. Prepare a Bill of Sale and Pay with a Traceable Method

When there is no title, a bill of sale becomes very important as a way of proving the vehicle is being sold in good faith. The bill of sale will contain both the buyer’s and seller’s names, as well as addresses, the sale price, the odometer reading, all the car information and more. The bill of sale can then be signed and notarized, too.

The other thing is to avoid paying in cash, even if it’s what the seller prefers. When there is no title, you have some leverage to use in insisting that an alternative such as a check or bank draft be used. The ideal method is to create a sales agreement between you and the seller that places the funds in escrow until the title is finally produced.

In this case, when you have a buyer who claims they can get you the title soon, but it will take some time, you can create equity between you. You demonstrate your willingness and ability to purchase the vehicle by placing the money in escrow, and then the seller has to hold up their end of the bargain.

3. Get a Replacement Title

The next method is to simply replace the title using the official DMV channel. If the vehicle has been titled and registered by this seller in this state, then getting a replacement is as easy as filling in a form at the DMV, bringing proof of identification and residence, paying a fee and getting a new title issued. When you go in person, it’s faster than mailing it, too, typically just a matter of days. When mailing, it takes weeks. Once the new title is in-hand, things can proceed as planned.

4. Track Down the Original Title

If you know where the car was last registered — there’s a good chance it was out of state if the title has gone missing — you might be able to track down its current titled owner. This is a situation where the current owner and keeper never registered or titled the car for themselves. They may have received it as a gift, or just never bothered doing paperwork when they bought the car.

If you have the state where it was last registered, you can contact the DMV with the VIN and request information on the titled owner. You’ll likely have to explain the circumstances, but there’s no guarantee they’ll give you what you’re looking for. Most of the time it should work and you can get some contact information for the titled owner, after which you can contact them to help get a replacement title sent to you.

5. Get a Surety Title Bond

One bond status we haven’t much talked about is the lien status. If there is no title in the seller’s hand, then you can’t know for sure whether or not it has been fully paid off. If there are liens on the car, they are listed on the title and it is legally the property of the finance company, and the seller, even if they are the registered keeper of the car, are not entitled to sell it.

You can check if there are liens by contacting the DMV and providing the VIN. If there are liens and the seller isn’t going to clear them, obtain a lien release letter and get their title back that way, then you should really walk away from the deal.

If there are no liens, then you can move to find a Surety Bond provider. Ask them what they need to organize a Lost Title Bond. If the seller can provide proof of purchase, proof of residency, proof that the car is not salvaged, and an accurate valuation, then the bond can be issued. You need an accurate and impartial valuation for the vehicle, which is then used to calculate the bond amount, perhaps twice the value of the vehicle. You pay a small percentage of the bond’s value as a fee, and are then covered against any financial penalties that were to come your way in the event that the sale was not kosher.

In the end, it’s still better to avoid car sales that don’t come with a title in the seller’s hand, but really that’s just to steer clear of risk and bureaucratic burden that comes your way as a result of such a transaction. It’s understandable, however, when the car model is exactly what you want, and the price is right, that you might not be afraid to go the extra mile to get the car you want.

Follow the steps we have laid out above, and you’ll have done everything you can to make it work, and to protect yourself from the bad behavior of unsavory sellers. Always keep one eye on how sellers are reacting to your taking the above steps. If they appear rushed, agitated, nervous or unwilling to share, then that confirms the red flag that many people advise from the beginning. Tread carefully and the sale will go fine.

« The Best Places to Buy a Used Car – Online & Offline