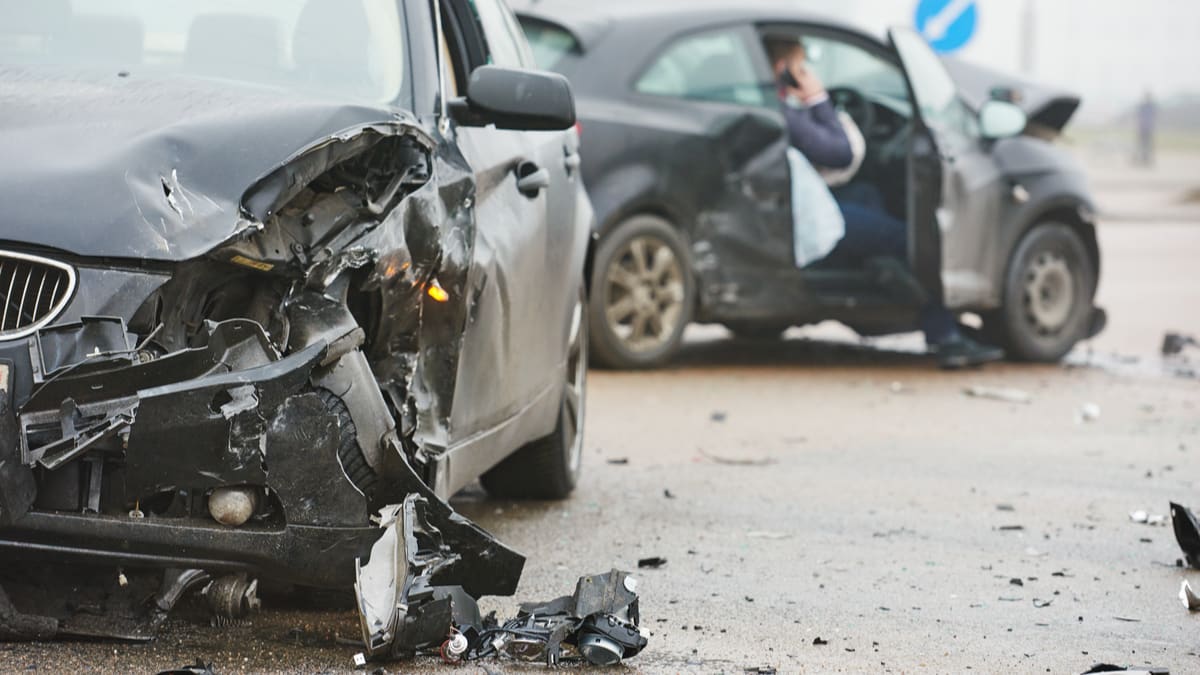 Until every ounce of human error can be removed from our transportation system, car accidents of some magnitude will likely always be a reality of driving life.

The automotive industry has come a long way in recent years in trying to improve the safety standards of cars, either making them more durable in crash conditions, or better at avoiding and mitigating accidents altogether.

While scientists and engineers continue to work on those problems, one thing we can do to be safer drivers is to educate ourselves on the most common causes of car accidents.

Below is a list compiled from information provided by the nation’s top insurers over the years that gives a window into what’s causing many of the car accidents out there today.

Here is a more detailed list of the most common causes of car accidents:

The first several items in our list all come under the broader category of “distracted driving,” which remains the top reason for car accidents in 2021. Among the top distractions are those pesky but highly useful devices we seem to keep on our person 24/7 – the smartphone.

Whether it’s answering texts, scrolling social media, sharing hilarious memes, or fiddling with music and video apps to get the right playlist going, smartphones are a huge distraction that are causing thousands of accidents.

According to the National Safety Council, 1 in every 4 accidents is caused by texting and driving, and wider cell-phone-related accidents amount to some 1.6 million crashes every year. These are numbers that should be scary enough to stop us from allowing our phones to distract us on the road.

Another big cause of accidents in the distracted driving category is distractions caused by passengers in the vehicle.

There are many ways that this kind of unfortunate thing can happen, but one example could be kids fighting on the back seat, or driver and passenger getting too engrossed in a conversation that their attention is diverted from the road. You can imagine the possibilities.

Finally in our distracted driving category we have the issue of food and drink in the car. For this entry, we are not including alcohol (see more below), but regular food and drink can prove just as deadly.

Safely driving a car is a kind of balancing act between hands being on the wheel, the gear shifter, the other controls, and your eyes being on the road. When you try to bring food into the balancing equation, things start to get a little off-kilter.

Once again, there are many possible scenarios, all of them easily imagined and plausible. It could be someone spilling hot coffee in their lap, or biting into some food that is too spicy and making their eyes watery and stinging, or even the act of eating itself obscuring the driver’s field of vision, even if just for  a moment — that’s all it takes!

Moving away from distracted driving, we now get into the arena of “reckless driving.” Breaking the speed limit is the next big on-road killer. Interestingly, we aren’t talking about people zooming down the freeway at 100-mph. In fact, a much bigger killer is people who exceed lower speed limits like 30-mph and 40-mph, thinking that “just being 5-mph over” isn’t making any difference.

What many drivers seem to be oblivious of is how much difference even 5-mph makes to their braking and stopping distances. It’s much more than you think. Even when we use a bigger gap like 20-mph, the distance change is astonishing.

The next kind of reckless driving is drunk driving. Alcohol severely impairs your reaction times, coordination, concentration and vision. In other words, no part of alcohol consumption makes your driving safer. If you ever come across those people who claim that a little beer and buzz makes them “a better driver,” give them a wide berth.

According to the NHTSA, there is one alcohol-related death every 52 minutes, and drunk driving causes more than 10,000 deaths every year, which accounts for about a third of all traffic-related deaths. Especially affected are those who are not drunk and behind the wheel, like the 200+ children who are killed.

Another form of reckless driving is seen in the form of those who believe they are kings of the road, and who treat the public road like a racetrack. These people are weaving in and out of busty traffic, cutting people off, passing cars on blind corners and more.

Their arrogance and lack of proper control and discipline behind the wheel is usually the result of years of accumulation of bad habits and lucky misses. Every time they do something stupid and don’t get hurt, it emboldens them to do more.

Next, we have those who think a “Stop” sign only applies to other people, and that red lights are only advisory. The simple act of failing to stop when you are instructed to can lead to catastrophic results on the road, sometimes just for yourself and your own passengers and vehicle, but very often for others too.

A “Stop” sign or red light is there because that part of the road you are on is commonly or about to be frequented by other traffic. It’s telling you to stop and regard the road around you for your own safety. Thinking that these signs and lights are a hindrance that are just there for others is a great way to cause accidents on the road.

Just about all teenagers are new drivers, but it’s true that not all new drivers are teenagers. One of the reasons that insurance companies are so strict on teen policies is that statistically they are more likely to either make bad decisions behind the wheel, or their inexperience will cause problems for themselves and others.

Sometimes teens are the cause of others’ accidents, or they might get into the accidents themselves. In any event, they remain a big cause of accidents.

Even if new drivers are older, the problem of inexperience still remains. They are more easily spooked by things in the road, and more likely to miss road sign instructions or make other mistakes while driving that lead to accidents.

Now we turn to the first reason in our list that’s not human related. The weather is a big cause of accidents, particularly if it compounds one of the human-related issues that we’ve described elsewhere in today’s blog.

Tesla’s AutoPilot system, for instance, is severely impaired by heavy rain as the cameras and sensors can’t pick up things as clearly. If you’ve been using it a lot and have grown complacent, a sudden rainy day can leave you in greater danger.

Some people joke about road rage and may attribute it to anyone who demonstrates even the slightest bit of aggression on the roads. The fact is, however, that road rage is a serious problem. In the US, there have been something like 30 murders that were linked to road rage, and AAA has linked more than 12,500 injuries and 10,000 car accidents to road rage since they started monitoring it in 2007.

Another big cause of accidents on the road is our own tiredness. Drowsiness and fatigue are particularly deadly because they can come upon us at times when we don’t suspect that it will, or shortly after periods of great energy and exuberance.

We might get behind the wheel feeling great, but within a short time on the road we can succumb to the many factors trying to force us to sleep.

Fatigue behind the wheel isn’t always to do with real tiredness, but also just boredom that can overtake us when we’ve been behind the wheel for many hours on long, straight and featureless roads. The car can also be very warm, and if you’re alone then the silence of the car might also send you to sleep. There’s a lot more to it than people imagine.

Here’s another one that’s not down to driver error, and that’s the sometimes very poor condition roads are kept in. Accidents caused by unfortunate encounters with potholes, for instance, can be extremely dangerous.

If you’re driving along a poorly maintained road and hit a pothole at speed, it could knock off your alignment or cause a tire blowout that makes you lose control of the vehicle. If you’re driving fast, then losing control can be tantamount to a death sentence.

Another cause not related to driver error is severe defects in the vehicle. There’s a reason car company’s get involved in national scandals whenever there’s a recall, because a recall typically means that there’s something wrong with the cars that are affecting their overall safety.

A recall means you shouldn’t be driving your car unless you’re heading to the dealership to get the problem fixed.

These defects can be deadly. Anyone whose car is embroiled in the Takata airbag scandal, for instance, will be aware of just how terrible it can be. Japanese manufacturer Takata makes airbags for multiple OEMs, and admitted that they built around 4.5 million faulty inflators over the years. These faults can cause airbag inflations to launch debris right into a driver’s face.

One more of nature’s interesting quirks is a big cause of accidents, and that’s the nighttime. Driving at night statistically increases the risk of accidents potentially by double.

Visibility is impaired, but people’s everyday distractions like their infotainment system, smartphones and passengers remain. The night demands greater vigilance, but it causes accidents because people don’t raise their driving game enough.

Finally, we have the problem of tailgating. This should fit with the concept of dangerous driving, in reality, but it’s so common that it’s earned its own spot in our list. To be clear, tailgating refers to the act of following other drivers too closely and then crashing into them if and when they suddenly brake.

A good rule for keeping a safe distance is to use the “two-second” rule, which you then increase during bad weather or winter conditions. Pick a landmark up ahead like a road sign, bridge, tree…anything will do. When the car in front passes it, start counting. If two seconds pass before you reach the same landmark, then your distance is safe. If you get there sooner, then back off.